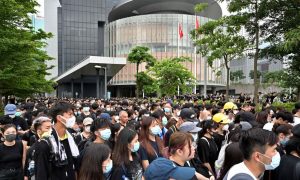 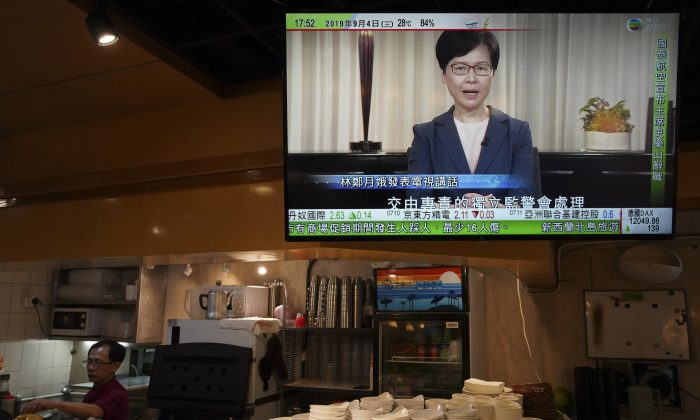 Hong Kong leader Carrie Lam has announced the withdrawal of an extradition bill that has triggered the largest protests in the city’s history.

Lam’s announcement was made in a pre-recorded television address just before 6 p.m. local time on Sept. 4.

“The government will formally withdraw the bill in order to fully allay public concerns,” Lam said in her address, adding that the city was in a “highly vulnerable and dangerous” place and should come together to find solutions.

The withdrawal, a key demand of protesters, came after months of unrest as the government repeatedly refused to back down—igniting sometimes violent clashes with police and resulting in the arrests of more than 1,000 protesters.

Many are furious at perceived police brutality and the number of arrests—1,183 at the latest count—and want the city government to establish an independent commission to probe instances of police violence.

#BREAKING: In a video message, Finally, #HongKong leader #CarrieLam has back down and announces the formal withdrawal of the #extraditionbill after almost three months of #HongKongProtests, but still refused to set up an independent inquiry into alleged #policebrutality pic.twitter.com/cKAtLPPfgu

But Lam insisted that an investigation by the city’s existing internal police watchdog would suffice.

“I pledge that the government will seriously follow up the recommendations of the IPCC’s report. From this month, I and my principal officials will reach out to the community to start a direct dialogue … we must find ways to address the discontent in society and look for solutions,” Lam said. She added that she has appointed two new members to the IPCC.

Protesters have questioned IPCC’s ability to conduct impartial investigations of complaints against the police force—a concern that the UN Human Rights Commission had raised in a 2013 report. The UN commission had recommended that Hong Kong “establish a fully independent mechanism,” given that the IPCC “has only advisory and oversight functions.”

The protests began in March but snowballed in June and have since evolved into a push for greater democracy for the city which reverted from British to Chinese rule in 1997.

The bill would have allowed Hong Kong citizens to be sent to mainland China to face trial in the Chinese Communist Party’s opaque legal system, drawing widespread concerns that critics of the Chinese regime would be punished with impunity.

Hmmm, a lot of triumphant headlines in international media, but most HongKong protesters, including the more moderate ones, aren’t going to accept #CarrieLam‘s offer. It’s the one that would’ve worked after June 9th and before June 12th.

Following Lam’s announcement, convener of the city legislature’s pro-democracy camp Claudia Mo said at a press conference that Lam’s “so-called concession, has come too little too late. The damage is done, the scar, the wounds are still bleeding in Hong Kong. She thinks that she can use some garden hose to put out a hill fire, that is not going to be acceptable.”

She added that it would be up to the protesters to decide whether or not Lam’s latest decision would appease them. “It is up to the young protesters at the front line to decide how they should take it. My major impression is that they are adamant about the five demands being met before their fight would stop.”

Pro-democracy activist Joshua Wong, who recently called on German Chancellor Angela Merkel to raise the issue of Hong Kong protests during her upcoming visit to China, took to Twitter to reveal his thoughts on Lam’s decision.

“Too little, too late,” said Wong, who was one of the leaders of the 2014 pro-democracy Umbrella Movement that was the precursor to the current unrest. “Carrie Lam’s response comes after 7 lives sacrificed, more than 1,200 protestors arrested, in which many are mistreated in police station.”

1. Too little and too late now — Carrie Lam’s response comes after 7 lives sacrificed, more than 1,200 protestors arrested, in which many are mistreated in police station.

Pro-democracy lawmaker Au Nok-hin took to his Facebook page and wrote: “Five demands, not one less.”

In addition to the withdrawal of the extradition bill, the protesters have continually demanded: an independent inquiry into the protests; fully democratic elections; dropping the government’s previous characterization of the protests as “riots”; and exonerating all protesters who have been arrested so far.