800,000 Hongkongers Take to the Streets to Mark Human Rights Day 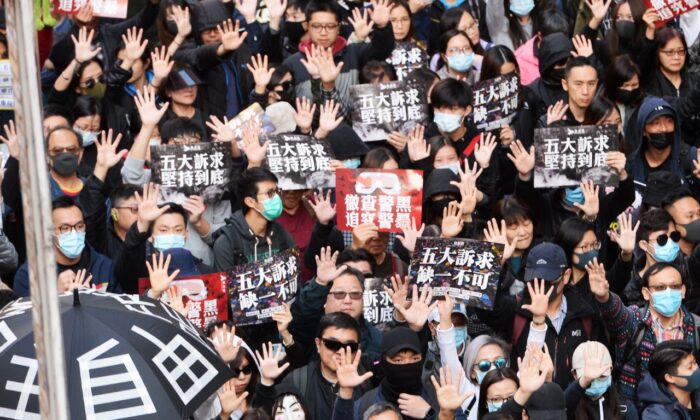 Protesters hold up their hands in a sign of calling for their five demands in a march in Hong Kong on Dec. 8, 2019. (Sung Pi Lung/The Epoch Times)
By Annie Wu

HONG KONG—A vast sea of people marched through downtown Hong Kong on Dec. 8 to show their determination to preserve Hong Kong’s autonomy from the Chinese Communist Party’s influence and to push for greater democracy.

With the theme “Stand With Hong Kong, Walk With You All,” the march was organized by local pro-democracy activist group Civil Human Rights Front (CHRF). The group obtained rare police approval to organize the event. Its previous three march applications—on Aug. 31, Oct. 1, and Oct. 20—were all turned down.

At about 8 p.m. local time, CHRF estimated that 800,000 took part in Sunday’s march. Local police gave a much lower estimate, saying there were 183,000 people during the peak.

It’s about an hour before the #WorldHumanRightsDay march in #hongkong is set to start, and there’s already a huge swarm of ppl headed toward Victoria Park #hongkongprotests pic.twitter.com/U00IhxTzoV

The protest coincided with the celebration of human rights around the world. The United Nations has designated Dec. 10 as Human Rights Day.

A short rally was held at Victoria Park first, before protesters marched to Chater Road at 3 p.m. local time.

Protesters could be seen waving flags with the Chinese characters for “liberate Hong Kong,” as well as flags from different countries and regions that have voiced support for the movement, including the United States, Japan, and Taiwan.

There’s so many people gathered for the march that they have spilled over to the footbridge outside Victoria Park. #hongkongprotests pic.twitter.com/iZnw6j6DMa

On July 21, men in white shirts with triad backgrounds stormed the Yuen Long metro station and attacked passengers with sticks, clubs, and poles. Police didn’t arrive on the scene until 45 minutes later.

On Aug. 31, riot police stormed Prince Edward metro station and assaulted passengers indiscriminately. Since then, there have been rumors circulating that the violence resulted in protesters’ deaths.

In an online declaration, CHRF stated: “The human rights violations and humanitarian crisis in Hong Kong and China are reaching the tipping point now.”

“The Hong Kong government must realize our five demands in order to fulfill the duty of international human rights protections, and defend humanitarianism and human dignity.”

The ongoing mass protests in Hong Kong, now in their seventh month, were sparked by public concerns about a now-withdrawn extradition bill, which many feared would erode the city’s judicial independence. Now protesters are demanding that the city government answer their five demands, including for universal suffrage and an independent inquiry into instances of police violence.

A protester surnamed Mak, 73, told The Epoch Times that he was dissatisfied with the Hong Kong government and the local police force.

“The use of force has gone overboard,” he said, adding that he had seen many videos of police beating up young protesters after they were subdued, with arms twisted behind them.

“I’ve been here for decades. Police in the past were not like this.”

He said life in Hong Kong had become more and more “like the Chinese mainland.”

Another protester surnamed Cheung, 51, said, “We are against the Chinese Communist Party [CCP] because it is stripping away our freedoms.”

He said that in 2018, for instance, pro-democracy candidates were disqualified despite being elected into office.

“We need to stand up as Hong Kong gets less and less human rights,” he said.

Cheung said he holds hope for the democracy movement, even though the CCP has clearly stated in the past that it will not grant truly free elections.

“Even if the CCP doesn’t give in, we will keep going. The youth have already sacrificed so much. I need to step out,” he said.

Cheng, a mother of two sons, aged 2 and 10, said she was attending the march because she wanted her children to have freedom of speech.

She expressed optimism about the democracy movement, particularly after the recent police siege at the Chinese University of Hong Kong and the Polytechnic University.

“We are still together. … We can only keep persisting,” she said.

She said she wouldn’t live in fear of the police despite their use of force against protesters.

Another protester surnamed Kei said that the world needs to do more to combat the Chinese communist threat.

“Hong Kong’s today will be the world’s tomorrow. … Your homeland will be the next victim of the CCP,” he said, adding that Chinese infiltration has also corrupted businesses and spread the CCP’s media propaganda into other countries.

He called on the U.S. government to enforce the recently passed Hong Kong Human Rights and Democracy Act against mainland Chinese officials. He also suggested that the United Nations send peacekeeping forces to Hong Kong to assist with the crisis.

Arrests Before the March

Just hours before the rally, Hong Kong media reported that local police had arrested eleven “suspects” aged between 20 and 63, as well as seizing a semi-automatic pistol with 105 bullets in an operation on Hong Kong Island.

Police claimed that the suspects wanted to use the weapon on police during the march.

In response to the police’s announcement, CHRF took to its Facebook page to question whether the police had intentionally created panic just before the march.

Joshua Wong, activist and iconic figure from the 2014 Umbrella Movement, was among those taking part in the march. According to local media RTHK, Wong also questioned the timing of the police operation, which he speculated could have been a “political maneuver.”

On Dec. 6, the Hong Kong Public Opinion Research Institute released a new poll of 1,062 people surveyed between Nov. 21 and Nov. 26. The poll showed that 65.1 percent were dissatisfied with the police’s performance—an increase from 28.1 percent in the previous June poll.

At around 5:30 p.m. local time, local police set up a defense line at Paterson and Kingston streets, located about a block away from Victoria Park. Protesters set up an umbrella barricade, but later retreated.

At one point, the police put up a black flag warning protesters that tear gas would be deployed, but ultimately did not fire.