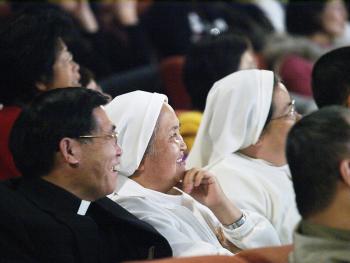 “I think the costume designs and the backdrops matched beautifully. The costumes were especially beautiful—they fully manifested the beauty of the Chinese performers. I was very touched. In terms of artistry, I think it can truly move us Chinese. I feel like everyone’s in the same family,” he said upon watching the show.

Mr. Lai was absorbed in tenor Guan Guimin’s “Let Me Not Regret” and alto Yang Jiansheng’s “Pause to Notice.” He said, “Guan Guimin’s high notes were absolutely unblemished. His song was very good. Also the alto was very wonderful. Her low notes lasted very long without losing the timbre. It was great! Very few people can sing the low notes so well.”

One of China’s most celebrated tenors of recent decades, Guimin Guan was among the first artists to be named a “National First-Class Performer” by China’s Ministry of Culture. Alto Jiansheng Yang is a graduate of China’s prestigious Central Conservatory of Music, and was a member of the Central Philharmonic Orchestra of China.

Mr. Lai was introduced to Shen Yun by his friends a long time ago. He said that he was very touched after seeing it with his own eyes. “I’ve always loved performances. I often travel abroad to see shows, and many of them are top-notch. I missed the opportunity to see Shen Yun in New York City and I heard that it was being shown in Taiwan, so I decided to come.”

Mr. Lai bought tickets for both days of the weekend at the Hui-Sun Auditorium. He heard that Shen Yun had live orchestra in New York City. He said, “I think next year if I get a chance, I will definitely go to New York to see Shen Yun.”

Before leaving, he sent his greetings to DPA, “I know Shen Yun’s kindness. I hope that Shen Yun will continue to promote our Chinese culture.”