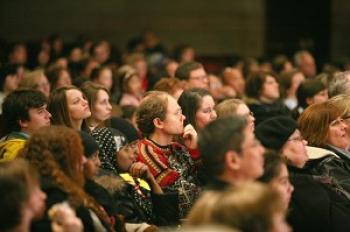 The audience at the Divine Performing Arts 2009 World Tour in Minneapolis. (The Epoch Times)
Arts & Culture

MINNEAPOLIS—The Divine Performing Arts (DPA) performed at the Northrop Memorial auditorium at the University of Minnesota on Feb 3. Among those who enjoyed the show, was Professor Kagan, a historian.

In his academic work, Professor Kagan, focuses on, among other things, human rights, China and Korea.

With this background, he still learned "the real essence of Chinese culture and how I enjoy it" by attending the Divine Performing Arts show.

"It's a wonderful show," he remarked. "I've enjoyed it very much. I've seen many shows. I really like the emphasis on the Tang Dynasty and on Chinese tradition and culture. And then you see here, the very athletic presentations in the performance.”

The show, in fact, reminded Professor Kagan why "he got involved in Chinese history 50 years ago." It is because, as he says, "I really love Chinese culture."

Professor Kagan believes that, in recent times, Chinese culture has become more nationalistic and less aesthetic. He thought that the Divine Performing Arts show helped to present Chinese culture in a way that celebrated its aesthetic values.

"The program is really wonderful because it gives many different views of what Chinese history is about. It is not about just one view; it shows the tremendous aesthetic-ness of the Chinese people, in terms of their dance, in terms of their various forms of dance," continued Mr. Kagan.

He particularly appreciated a segment within the DPA called The Monkey King Triumphs.

"The Monkey King is wonderful; the drumming is something anybody could enjoy and appreciate, and want to copy and do as well."

Monkey King is one of China's most beloved characters. It comes from a 16th century novel, Journey to the West, in which a Buddhist monk travels to India in search of scriptures and is joined by an ogre, a pig and a miraculous monkey along the way.

Professor Kagan also appreciated the backdrops used in the show: "The use of technology is fantastic with having the screen bringing the figures up into heavens and coming down again. Shows how China today can bring together all the technological advances with the traditional dancing."

The digital backdrops at each Divine Performing Arts show bring classical Chinese dance into the 21st century, giving each scene an added visual depth and grandeur. Each backdrop is custom-designed to match a dance’s costumes, story line, lighting, and choreography.

When asked what part of the show he liked best, the professor replied that he thought that it was the drumming.

"The drumming scene … had so much elasticity in it. People beating the drum in a different way,” he said.

The Epoch Times is a proud sponsor of the Divine Performing Arts. For more information, please see DivinePerformingArts.org