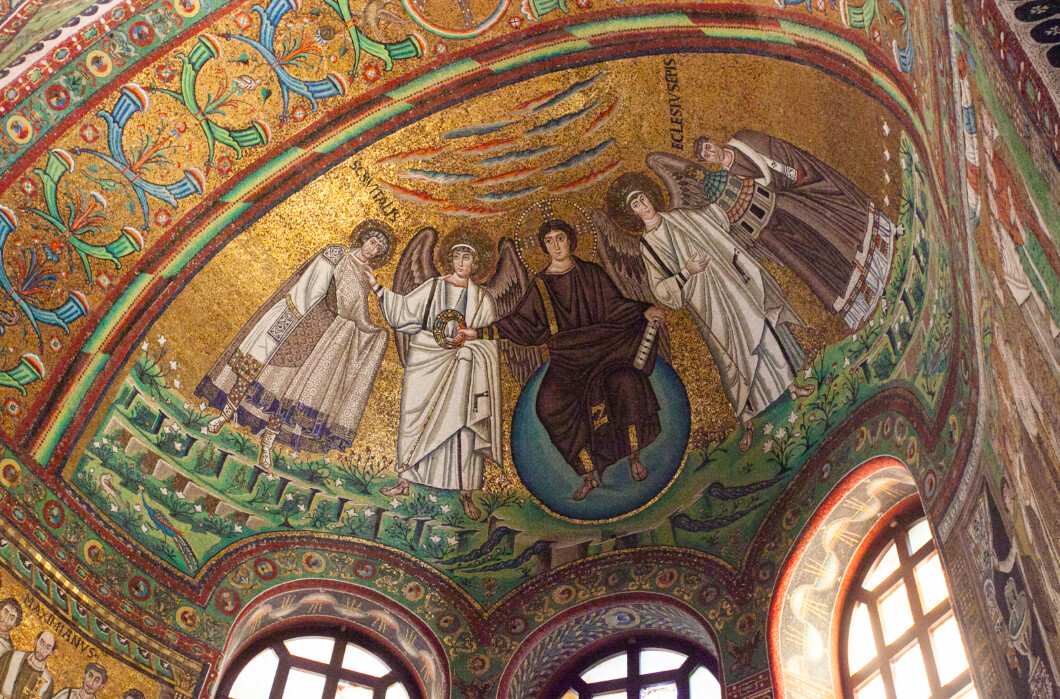 The name was somewhat familiar, but riding a shuttle in from the port, I realized that I knew basically nothing about the city of Ravenna. Certain destinations in Italy are immediately recognizable, with a whole set of colorful and unmistakable images associated. Rome? The curve of the Colosseum, of course, dating back to the first century, plus the Spanish Steps, the flow of the Trevi Fountain, and the soaring dome of St. Peter’s in Vatican City. The mere mention of Venice conjures the songs of gondoliers, plying the canals and passing under bridges, and getting lost in this romantic labyrinth. And a passing reference to Naples will probably encourage the appetite, this birthplace of pizza, where a classic wood-fired pie seems to be available on every corner. Take your pick—each one is probably better than any slice you’ve ever had before.

The Seat of Empires

But Ravenna? Turns out this small city on the east coast of the Italic Peninsula has plenty to offer, including truly spectacular mosaics, and a rather surprising history. Plus, flamingos and herons, just over there in the wetlands fringing the edge of town.

“This was a very safe place, with the sea on one side, and a big marsh on the other,” the guide recounted, pointing to the vibrant green spaces just off to the right of the bus. “And thus, this was once the seat of empires.”

Set just inland from the Adriatic Sea, Ravenna is a vibrant city of about 150,000. As travel reopens and popular destinations brace for their busiest summer in years, Italy promises to be mega-popular with tourists. Hotel bookings are already through the roof, the streets and restaurants and top attractions jammed with eager travelers, excited to tick items off their bucket lists. So those searching for a less-chaotic trip, and a little more time and space to experience the places along the way, may need to search a little harder this summer.

And those who find Ravenna will find plenty to do, see and eat. I arrived on a cruise ship, the Viking Sky, with just a single day to explore. Leaving the ship and riding in from the port, the guide walked us back in history. Settlements uncovered in the area by archaeologists date all the way back to the 5th century B.C., when an ancient people known as the Umbrians built villages on hilltops across the region. Julius Caesar crossed the Rubicon near here, and Ravenna was made a federated town in the Roman Empire in A.D. 89.

Centuries of development and prosperity followed under the Romans, the port both strategic militarily and a hub for trade with other wealthy places further east. Ravenna grew to a city of some 50,000, and in A.D. 402, Emperor Flavius Honorius made it the capital of the Western Roman Empire, which stretched from North Africa across the Iberian Peninsula, all the way across modern-day France to Britain.

“The city was very elegant and famous,” the guide said.

It didn’t last long. The empire suffered a fatal blow at the Battle of Ravenna in A.D. 476, but the city then became the capital of the Eastern Goths—the Ostrogothic Kingdom—in A.D. 493, and, soon after that, the Italian seat of the Byzantine Empire. Many of the details have become historical trivia, but this heady era, when Ravenna was one of the most important cities on the globe, left behind a number of beautiful sites, including basilicas and the Mausoleum of Theodoric, who ruled both the Ostrogoths and the Visigoths until his death in A.D. 526.

Today, Ravenna bustles. No longer set directly on the coast—the port silted up in the centuries since—its pedestrian center is a pleasant place for a stroll. Boutiques line cobblestone passageways. People gather at the Piazza del Popolo, the city’s main square since the 13th century. The open-air cafes are busy with al fresco diners, and the surrounding buildings are rather stately, including the Palazzo Merlato, the seat of municipal government, and the Palazzo della Torre dell’Orologio, the palace of the clock tower.

There are plenty of places here for a bite of pizza and pasta, but the nearby Mercato Coperto is even better. Set on a site of trade for fishermen and butchers dating back to the Middle Ages, the current “new” covered market dates to the beginning decades of the 20th century. Its impressive Neoclassical structure has been renovated several times since. Today, you can pick up everything from produce and seafood to meat and gelato over two floors, in a light-filled space under one vaulted roof.

But there’s no time to tarry. Today’s destination is one that’s made Ravenna famous among history buffs and art enthusiasts around the world: the mosaics. UNESCO has recognized a collection of eight buildings across the city that feature these intricate creations, together honoring them with World Heritage Site status. They include the Mausoleum of Theodoric, and all date back to that heyday in the 5th and 6th centuries, when Ravenna reigned supreme.

The most impressive, perhaps, is the Mausoleum of Galla Placidia, set in the courtyard of the Basilica of San Vitale. From outside, it’s not much to look at. Standing in line for a few minutes—the space inside is small, and a particularly interested and enthusiastic group of university students moved slowly ahead of us—I lowered my expectations as I considered the diminutive size and simple, nondescript brick exterior of the building.

But crossing the threshold, I entered another world. Intimate and close, the bright colors and incredibly intricate designs almost overwhelm and consume. A starry sky spreads across the shallow, domed ceiling, gold embedded in a deep blue background, constellations that seem close enough to reach out and touch. Green grapevines climb the archways. Christ the Good Shepherd and various saints look down from above. Despite the building’s name, Empress Galla Placidia probably was never buried here—her body actually rests in Rome.

The guide said that Cole Porter wrote one of his best-known songs, “Night and Day,” after a visit here. And as I proceeded out, back toward the heart of town, my heart was indeed singing. More to see here in Ravenna, and hopefully a visit back soon to enjoy even more.

Fly: Most visitors will fly to Bologna Guglielmo Marconi International Airport (BLQ), where a number of major European carriers plus low-cost airlines such as Ryanair and Wizz Air connect the region to the rest of the continent. From there, it’s about an hour by car to Ravenna.

Getting Around: Like most northern Italian cities, Ravenna is well-covered by public transit, and ride-share services are also available. It’s also connected by train to other parts of the country and Europe beyond, but if you’re looking to explore the countryside nearby, it’s best to rent a car.

Stay: Housed in an 18th-century palace, the four-star Palazzo Bezzi is within steps of some of the major mosaic sites, with fresh, bright rooms and a rooftop terrace overlooking the rooftops of the city.

Take Note: One of the best ways to explore Italy is by sea, where you can unpack your suitcase once and let the ancient wonders come to you. Viking Ocean includes a number of itineraries that sail across the Mediterranean in style, with ships that feature thermal baths, handsome winter gardens, and lounges encased in glass, with views stretching from water to sky. Their weeklong Italian Sojourn takes you to a number of ports of call along the Italic Peninsula, around the boot from Rome to Venice.