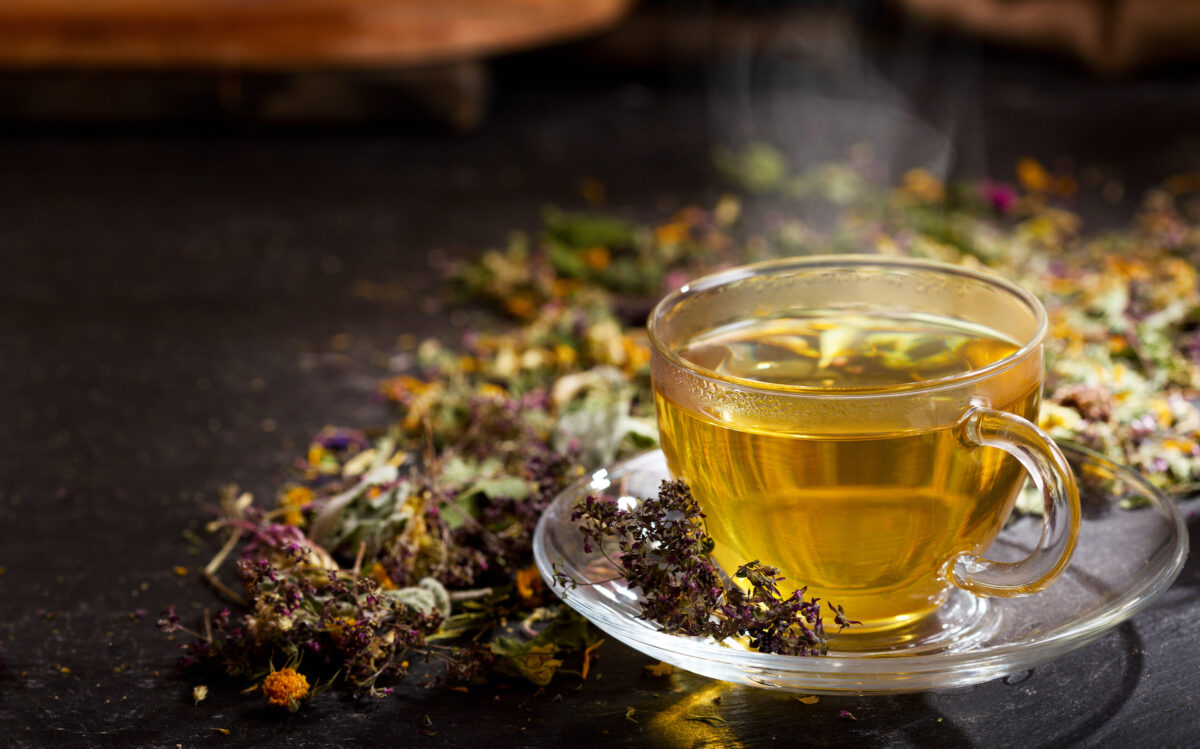 Herbal tea is the perfect choice for cleansing your body from unwanted toxins that cause disease. Caffeine-free and natural, they are nature’s best remedy against fighting unpleasant symptoms associated with common modern ailments. Herbal tea may also help boost weight loss and promote a healthier lifestyle.

If you are on any medication, it would be best to seek advice from a doctor before consuming any herbal tea as some may interact negatively with existing medication.

The seeds of fennel are commonly used in herbal tea remedies for aiding digestive disorders, including gas, bloating, and constipation.

All parts of the fennel plant are edible, but it is the seeds that are chosen for herbal tea. The flavor of the seeds resembles licorice or anise and makes for a pleasant cup of tea. The seeds are a good source of the trace mineral manganese—important for gut enzyme activation, and metabolism. Manganese also helps reduce inflammation. It is also high in antioxidants which help prevent free radicals causing damage to the body. The mineral has also been associated with helping to regulate blood sugar levels. Scientists have found low levels of manganese in diabetic patients which could explain the glucose intolerance commonly associated with diabetes. Consuming more fennel, whether as a plant or in herbal tea may boost levels of manganese and help in stabilizing blood sugar levels, as well as reducing bloating and indigestion.

Peppermint is another great option for relieving digestive upset and when paired together with fennel, result in a very powerful pair. Research has suggested that peppermint relieves an upset stomach by relaxing the digestive system. This is largely due to the menthol in the peppermint which encourages the flow of bile in the small intestine and helps to break down food more efficiently. Menthol also acts as a gut relaxant by calming the abdominal muscles and allowing gas to pass more easily. An easy way to consume peppermint is by brewing some of its leaves as a tea and drinking that until symptoms are alleviated. However, when brewed as a herbal infusion, the level of menthol in peppermint tea is generally lower than peppermint oil so more leaves are needed to boost the effects of menthol.

Few would consider making a brew using stinging nettles but this herbal tea has some surprising health benefits. The anti-inflammatory properties of this herb help with digestion and reduce constipation, diarrhea, and an upset stomach. Nettles are also considered a natural diuretic so promote healthy urination. Considered an excellent choice for urinary tract infections as it helps flush out harmful bacteria from the body.

Experiencing inflammation is very common and can be caused by various things, from consuming too many inflammatory foods, living a sedentary lifestyle, obesity, smoking, alcohol, stress, and even insomnia. Certain foods like sugar, vegetable oils, fried food, processed meat, and dairy can amplify inflammation in the body and it is best to avoid eating these too frequently. Other factors are predominately lifestyle-based and risks can be lessened with frequent exercise, giving up smoking and alcohol, and reducing stress.

Commonly used in India and other parts of the world as both a spice and a medicinal herb, turmeric is a very versatile and useful plant. It contains anti-inflammatory compounds called curcumin which suppresses swelling in the body, lessening any pain associated with inflammation. However, when consumed as a spice in food or as a brew, the curcumin in turmeric is often poorly absorbed into the bloodstream. Its effect can be greatly boosted when mixed with black pepper, which contains piperine and enhances the absorption of curcumin.

To brew a herbal tea using turmeric, simply take around one to one and a half teaspoons of ground turmeric, mixed with a pinch of ground black pepper, around two tablespoons of lemon juice, and two tablespoons of raw honey. You could also add in some sliced ginger or ginger paste to help with any digestive issues and boost the anti-inflammatory properties of the herbal brew. Mix thoroughly until a paste is created, and then add some hot or warm (not boiling) water to a cup containing all the ingredients. The lemon acts as another anti-inflammatory agent and is packed with plenty of immune-boosting properties. Honey is added for improving the flavor of the tea. It is also antibacterial and full of antioxidants which may help further with easing symptoms of swelling and inflammation. When using raw honey, it is advised not to use boiling water (above 200 Fahrenheit) as it may destroy the beneficial nutrients present in the honey. Alternatively, you could add the honey last after the water has cooled off a bit to ensure the water is not too hot.

Body Cleanse for the Liver

The liver is responsible for filtering the blood of toxins and maintaining healthy blood sugar levels. When the liver is damaged, it will not be able to carry out these important functions effectively and this could lead to disease. Certain lifestyle factors could lead to liver damage including long-term alcohol consumption, drugs, eating a diet high in fat, and a lack of exercise. There are some herbs that make great brewed teas and may help cleanse the liver from excess toxins built up over time. However, some may interact negatively with existing liver medication therefore it is important to seek a doctor’s approval before consuming any herbal teas.

The polysaccharides present in dandelion root support the liver’s ability to produce bile and also help it filter potential harmful chemicals out of your food. Dandelion herbal tea can be brewed using all parts of the plant, including its flowers, roots, and leaves. Often considered a weed to gardeners, this plant is hardy and can be grown easily across the planet, even in low-light conditions. Packed with vital nutrients and antioxidants, it is even recommended to people suffering from an upset stomach or a urinary tract infection due to its diuretic properties. Considered a natural diuretic, dandelion works by flushing toxins out of the body through urine and must only be taken by itself. Avoid dandelion root tea if you are already on diuretic medication.

It is very simple to brew dandelion tea, if you don’t find any in your yard, they are easily cultivated and are considered to be abundant plants. However, before harvesting dandelion for consumption, make sure no chemicals are used on your lawn. Alternatively, the herbs can be bought from most natural food stores. Simply wash the leaves and flowers then steep them in hot water for 15 minutes. The roots can be chopped into fine pieces and roasted in the oven for two hours before they can be used in herbal brews. Many liken the flavor of dandelion root tea to coffee, commenting on the deep, smoky notes, and the lack of caffeine makes it an attractive coffee substitute for the caffeine sensitive.

Many people think about licorice in its candy form but few would recognize it as herbal medicine. Many scientific studies have confirmed the medicinal benefit of this herb and consider it to be anti-inflammatory, antiviral, and possess liver-protecting effects. The primary component in licorice root responsible for protecting the liver is a component called glycyrrhizin which is often used in Chinese traditional medicine to treat liver diseases. Recent studies have attributed licorice root to reducing liver injury by enhancing the body’s antioxidant and anti-inflammatory capabilities. It is believed to help with liver conditions such as jaundice and non-alcoholic liver disease. While you can take licorice extract, it is also very easy to brew it as a tea to help detoxify the liver. Licorice root may also be good for treating upset stomach, digestive problems, and even certain skin conditions.

While herbal tea is a great way to reduce any unpleasant symptoms associated with ailments, they are certainly not a cure and only work to temporarily alleviate symptoms. It is important to work with a doctor or naturopath to discuss problems in the body and come up with a treatment plan that works for you. The herbal teas listed here are just suggestions for individuals dealing with minor inconveniences and should not be used as a cure for any disease.