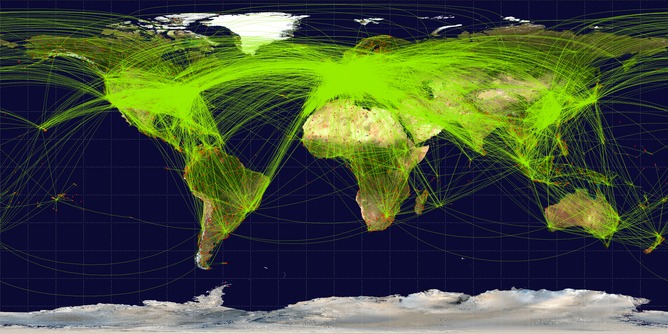 It’s a long way for one man and his reindeer to travel. (Jpatokal)
Life & Tradition

In just one night, Santa has to visit millions of homes to deliver presents. If he could travel at the speed of light, the task would be simple.

However, Einstein’s formula, E=MC², tells us that anything with mass cannot travel faster than the speed of light. And as we all know, Santa has mass. That’s before you even count all the presents that have to be transported along with his sleigh. Then add Rudolph and co and what you get is a lot of flying mass that makes Santa’s chances of travelling faster than light pretty slim.

Luckily, there are other options available to Santa to help increase his chances of delivering all the presents on time. And they relate to what is known in maths as The Travelling Salesman Problem.Even Einstein couldn’t solve Santa’s woes.

In this problem, a salesman has to plan a route through a number of cities. He has to start and end at the same city and visit every other city in between just once, while minimising the distance he travels. If we replace the salesman with Santa and the cities with chimneys, then Santa’s problem is a variant of the Travelling Salesman Problem.

Unfortunately, this isn’t much consolation to Santa. The Travelling Salesman Problem is known to be NP-Complete. This means that there is no known efficient algorithm that always returns the optimal solution in a reasonable time.

In fact, most mathematicians and computer scientists believe that no such algorithm exists, although this is yet to be proved. Anyone who can prove that it does exist (or indeed that it doesn’t) stands to win $1 million for solving one of the Millennium Problems and proving whether P=NP (or not).

Back to Santa. What can he do to plan his route? Although we do not know of an algorithm that is guaranteed to tell Santa the best route to take, there are algorithms that attempt to do this in reasonable time.

The Route Santa application, from Napier University, is one. The app shows an example of an algorithm solving the Travelling Santa Problem. Those hoping to receive gifts on the 25 December can contribute to the efficient running of Santa’s rounds by uploading their address into an interactive map. The Route Santa software will then add that address to its list and work out the best route for Rudolph. The more hopeful recipients that sign up, the more efficient Santa’s journey will be.

One type of the algorithm used for these type of problems are known as genetic algorithms because they are based on natural phenomena such as evolution, inheritance and selection.
Santa’s problem is your problem too

We tend to take it for granted that Santa will make his millions of deliveries on time every year but the Travelling Salesman Problem affects our daily lives, particularly now that so much of what we buy, from our food to our clothes and technology is delivered to our doors.

If we can work out the best route for Santa, we can also contribute to thinking about how to make other delivery services more efficient for the other 11 months of the year.