What Happens When You Eat Too Little Salt? 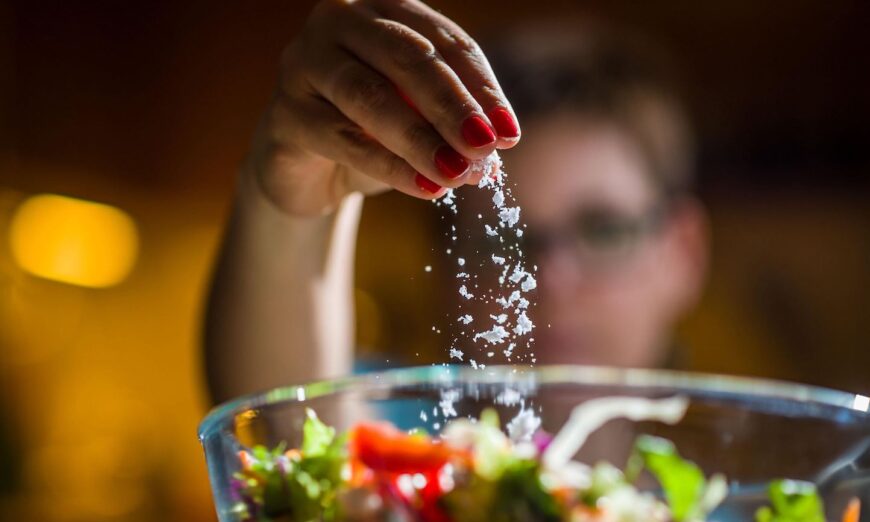 It may not be that we eat too much salt, but rather too much salt from highly processed foods.(goodbishop/Shutterstock)

Few would argue that the Western diet contains too much salt. Not just salty, processed foods that are so readily available at convenience stores and even gas stations that we probably shouldn’t be eating anyway but all the salt we add to our meals as well.

In fact, it’s often observed that people will add salt to their food before even tasting it.

While the 2020–2025 Dietary Guidelines for Americans say we’re supposed to consume less than 2,300 milligrams of sodium per day, Americans consume more than 3,400 milligrams per day—a lot more than they did in the 1970s. The problem is, according to the U.S. Centers for Disease Control and Prevention (CDC), high sodium consumption correlates with high blood pressure which, in turn, correlates with the risk of heart disease and stroke.

Yet according to an article published in the Journal of the American Medical Association (JAMA) in 2011, questions about the risks and correlations remain.

“The World Health Organization recommends a sodium intake of less than 2 [grams] per day, a level that is largely based on projections made from relatively small and short-term clinical trials evaluating the effects of sodium restriction on blood pressure in primary prevention populations,” the JAMA article authors wrote.

While few medical sources dispute the links between excessive sodium and high blood pressure, low-salt diets may have counterintuitive effects on cholesterol.

Cholesterol—which is also referred to as bad cholesterol, as opposed to HDL, high-density lipoprotein, the so-called good cholesterol—has been shown to be elevated by a low-salt diet.

An article in the Cochrane Database of Systematic Reviews, part of a journal that includes reviews, protocols, editorials, and supplements, studied the effects of a low-sodium diet on blood pressure and other disease risk factors, including, cholesterol and triglycerides. The study found that reduced sodium caused a 2.5 percent increase in cholesterol and a 7 percent increase in triglycerides, a type of fat found in the blood.

“The mechanisms associated with the changes in these lipids seem to be related to the fact that limited sodium intake reduces body water content, and in an attempt to revert low plasma volume, epinephrine, renin, and angiotensin increase,” the authors wrote.

More About Insulin Resistance and Diabetes

“Type 2 diabetes is increasing worldwide in epidemic proportions … imposing a major burden on the health care system,” research in the journal Diabetes reads. ”It is now generally accepted that insulin resistance and beta-cell dysfunction are major factors involved in the development of diabetes.”

Yet what role, if any, do low-salt diets play in the current diabetes scourge?

“The literature on salt intake and insulin sensitivity presents a mixed picture, as some studies have shown an increase, whereas others have shown a decrease, in insulin action as sodium intake is enhanced,” research published in the journal Clinical Science reads.

“We propose that the 4–5-fold increase in serum aldosterone and the greater increase in plasma noradrenaline concentration following the low-salt intervention compared with the high-salt period may have contributed to the differences in insulin sensitivity following the adjustment in dietary sodium intake.”

While the cardiovascular benefits of a low-salt diet are widely believed, they’re also sometimes disputed. Research in the American Journal of Medicine states that “there is evidence that a low sodium diet may lead to a worse cardiovascular prognosis in patients with cardiometabolic risk and established cardiovascular disease.”

Research published in JAMA sought to assess whether sodium, as determined by 24-hour urinary sodium excretion, could predict or affect health outcomes and blood pressure. The researchers found that a low-sodium diet could seriously worsen patient symptoms.

“In this population-based cohort, systolic blood pressure, but not diastolic pressure, changes over time aligned with change in sodium excretion, but this association did not translate into a higher risk of hypertension or CVD complications. Lower sodium excretion was associated with higher CVD mortality,” they wrote.

Some may remember hearing about endurance athletes—especially marathoners—suffering from “hyponatremia” or low blood levels of sodium. Sometimes masquerading as dehydration, the condition can cause headaches, seizures, coma, and even death. In athletes, hyponatremia can result from drinking too much water without replacing the sodium lost through exertion and sweat. In the elderly, the condition can result from medications that reduce sodium levels in the blood.

After studying endurance athletes, recent research in Frontiers of Nutrition states that “recommending that athletes’ fluid intake in endurance events be a function of their thirst almost entirely prevented development of hyponatremia,”—a pretty easy “fix” compared with other medical problems that exist. Of course, the same doesn’t go for hyponatremia in the elderly, which is likely much more complicated.

“Many things in life and especially medicine, if we discover too much of something might be harmful then our natural reflex is to eliminate it completely,” Dr. May Hindmarsh, who, along with her husband, Tim, practices urgent care medicine and operates the “BSfreeMD” website, told the Epoch Times.

“However, too little sodium is also harmful and possibly more so than in excess. There has been this push to cut back on salt, eliminate it, and put people on very low-sodium diets, which have been shown to be just as deleterious, if not more so.

“Hypertension is more likely to be caused from a low-salt diet because it causes insulin resistance and raises stress hormones such as adrenaline and noradrenaline and artery stiffening hormones.

“The other issue is what type of salt people are eating, and what is in it. Processed foods are laden with sodium but also many unhealthy products, such as high fructose corn syrup, preservatives, and other chemicals.”

Dr. Tim Hindmarsh told the Epoch Times, “Excessive water intake—especially if not coupled with increasing sodium intake—can result in hyponatremia, a potentially lethal complication of being low in salt.

“This is so easy to achieve that the Hawaiian ironman triathlon has had multiple cases a year of hyponatremia from low sodium consumption combined with drinking too much plain water. All this while exercising for up to 18 hours in the Hawaiian sun. No one can consume an ultra-low-salt diet and survive, period.”

Clearly, the jury is still out about the benefits and risks of low-sodium diets. Your doctor, of course, is the best guide for the role of sodium in your diet—granted he or she is up-to-date on the many varied findings on salt intake. Make sure your doctor is considering how whatever conditions you may have are affected by sodium levels—such as salt-sensitive high blood pressure.

Too much sodium may be harmful to our health, as we’re often told, but apparently, sometimes too little is also a problem.