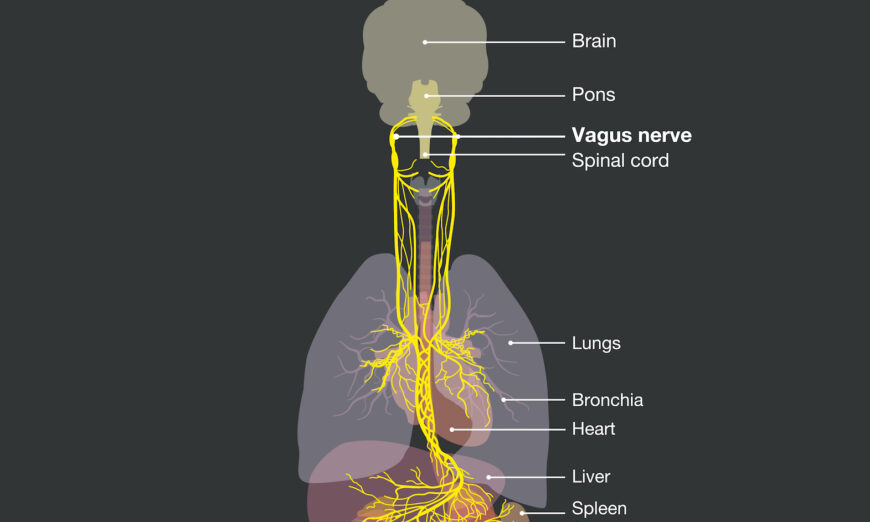 When it comes to major nerves in the human body, most people have heard of the optic and olfactory nerves, the facial and trigeminal nerves, and certainly—if they have been in pain—the sciatic nerve. Yet one of the body’s most consequential nerves that affects everything from mood, the immune system, heart rate and digestion to depression, post-traumatic stress disorder, and inflammatory bowel disease has somehow not become a household word: the vagus nerve.

Few anatomical structures perform so many functions and yet so seldom appear in medical articles. According to a recent article in The Epoch Times, the vagus nerve is quite the workhorse, regulating circulation, breathing, heart rate, digestion, and body temperature and even exerting anti-inflammatory actions!

An article in the journal Frontiers of Immunology elaborates on these actions.

“Because of its anti-inflammatory effect, the VN [vagus nerve] is a therapeutic target in the treatment of chronic inflammatory disorders where TNFalpha [tumor necrosis factor-alpha, an inflammation protein] is a key component,” the researchers wrote.

They advocated exploring ways to stimulate the vagus nerve as a treatment for a wide range of conditions.

“VNS [vagus nerve stimulation] could be used as a non-drug therapy to treat inflammatory disorders of the GI tract, such as IBD, irritable bowel syndrome, and postoperative ileus, which are all characterized by a blunted autonomic balance with a decreased vagal tone.”

According to Physiopedia, a nonprofit that educates physiotherapists, the vagus nerve also:

As more is learned about the microbiome and bidirectional communication between the brain and the gastrointestinal tract, sometimes called the “brain-gut axis,” our understanding of the importance of the vagus nerve grows. The vagus nerve is now seen as part of the sympathetic, endocrine, immune, and humoral systems that all “connect emotional and cognitive areas of the brain with gut functions,” according to a research review in Frontiers in Psychiatry. It’s even likely that the activity of gut bacteria affects the behavior of the vagus nerve, according to the study.

Elaborating on the interaction between gut bacteria and the vagus nerve, a study published in the journal Nutrients states, “The microbiota-gut-brain axis is a bidirectional link involving the central nervous system, the enteric nervous system, and the gut microbiota. … The effect of microbiota on the brain occurs through three main pathways of the microbiota-gut-brain axis: hormones and neurotransmitters, the immune system, and the vagus nerve.”

A type of probiotics known as “psychobiotics” regulates the microbiota–gut–brain axis and confers health benefits to patients with mental illness and insomnia, the authors wrote.

Better sleep is another vagus-nerve-related effect, according to a study published in the journal Frontiers of Neuroscience. Stimulation of the vagus nerve “modulates brain function, and it is an effective treatment for primary insomnia,” the researchers reported. Modulating spontaneous neuronal activity through “transcutaneous auricular vagus nerve stimulation” resulted in improved sleep in test subjects.

The vagus nerve’s effect on digestion is also impressive.

“When it comes to digestion, the vagus nerve controls many aspects of the process, including assisting the pancreas in releasing digestive enzymes, helping the gallbladder nudge out the correct amount of bile, and controlling the valve at the base of the stomach, as well as the one in between the small and large intestines,” Epoch Times contributor Amy Denney wrote.

And the vagus nerve is known to do more than the activities just listed. According to Stephen Porges, writing in a National Institute for the Clinical Application of Behavioral Medicine (NICABM) publication, even our facial expressions are governed by the vagus nerve.

“Thanks to the vagus nerve, the emotions we feel are displayed on our faces and in the sound of our voices,” he wrote.

Without the vagus nerve, we couldn’t convey empathy Porges wrote, and we “wouldn’t be able to tell how anyone else was feeling.” He’s widely credited with developing the Polyvagal Theory based on the vagus nerve, which has been instrumental in understanding the nervous system and how it retains traumatic experiences.

He also said our bodies can respond to situations in fear, even if we don’t consciously register that we’re afraid or perceive a threat.

“Because of our heritage as a species, neuroception [how our neural circuits distinguish if stimuli are safe or dangerous] takes place in the primitive parts of the brain, without our conscious awareness,” he said.

How Can You Quiet Your Vagus Nerve?

A 2017 book called “Accessing the Healing Power of the Vagus Nerve: Self-Help Exercises for Anxiety, Depression, Trauma, and Autism” by Stanley Rosenberg with a foreword by Porges offers several natural techniques for healing and strengthening your vagus nerve. Scientific studies in medical literature point to other useful techniques. As the vagus nerve is so responsive to stress, these exercises often rest on relaxation techniques that quiet the nerve and the conditions associated with it.

A study in the journal Psychology & Health found that patients with vagus-nerve-related Inflammatory Bowel Disease who received three relaxation training sessions and a relaxing audio disc to take home showed improvements in anxiety, pain, and stress. A study in the Journal of Crohn’s and Colitis found that “Multi-convergent therapy,” a type of psychotherapy that combines mindfulness meditation with cognitive behavioral therapy, was also successful in reducing symptoms of inflammatory bowel disease.

Hypnosis has also been effective in quieting the vagus nerve, according to a study published in the International Journal of Clinical and Experimental Hypnosis. According to the authors, “shifting the balance of the sympathovagal interaction toward an enhanced parasympathetic activity, concomitant with a reduction of the sympathetic tone,” produced improvement in subjects who responded to hypnotism (which not everyone does).

Finally, research published in the Journal of Investigative Medicine found that many well-established mind/body modalities, such as yoga, tai chi, qigong, mindfulness-based stress reduction, meditation, and deep breathing, were effective in the treatment of post-traumatic stress disorder, which is highly correlated with vagus nerve hyperarousal.

Clearly, exercises that can calm and strengthen this miraculous nerve can be of great benefit to our health—and they can often be practiced at home after a little guidance.