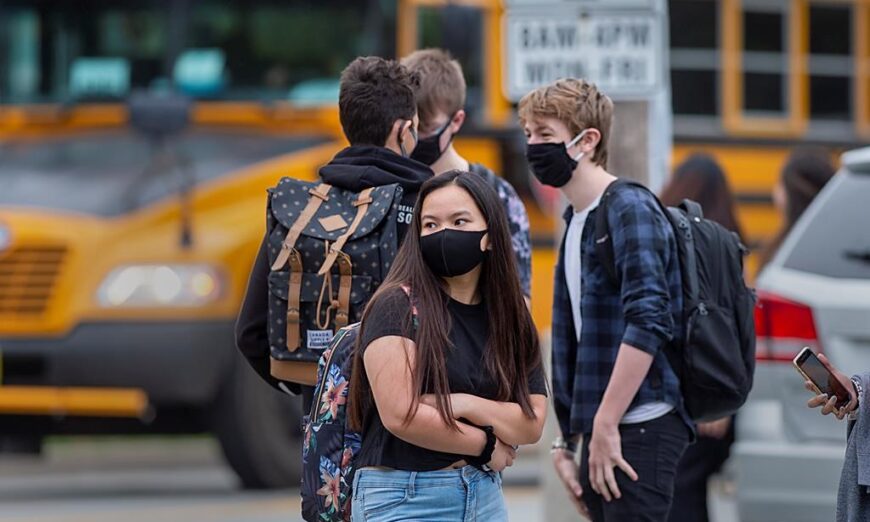 Students arrive at Dartmouth High School in Dartmouth, N.S. on Tuesday, Sept. 8, 2020. Classes for the new school year are starting on schedule after an extended break due to the COVID-19 pandemic. THE CANADIAN PRESS/Andrew Vaughan

Adverse health conditions experienced by adolescents may change over time as they recover from COVID-19, according to a study of over 5,000 11- to 17-year-olds in the United Kingdom.

In the study published on Dec. 4 in The Lancet Regional Health-Europe, a team led by researchers at University College London surveyed 5,086 children about their health conditions six months and 12 months after taking a PCR test between September 2020 and March 2021. They also asked the participants to recall their symptoms at the time of taking the test.

Specifically, the children were asked if they had experienced any of 21 symptoms, including changes to sense of smell and taste, shortness of breath, tiredness, and pain or discomfort.

None of these children had been hospitalized. Among them 2,909 tested positive for COVID-19, and 2,177 tested negative.

Upon analyzing the results, the researchers found that symptoms were more common among children who tested positive than those with a negative result at all three time points. For example, 10.9 percent of those who tested positive reported fatigue at at baseline and 6 and 12 months, compared with 1.2 percent among those tested negative.

Ten of the 21 symptoms had a prevalence of less than 10 percent at all three time points, regardless of the PCR test result, the researchers said. The other 11 symptoms declined greatly by 12 months in both those who had them when tested positive and in those who first described them at 6 months.

Overall, the prevalence of adverse symptoms reported at the time of a positive PCR test declined over 12 months, according to the study.

Interestingly, the researchers also noted that while some of the children’s original symptoms declined, new symptoms were reported.

“New adverse symptoms were reported six- and 12-months post-test by both test-positives and test-negatives, particularly tiredness, shortness of breath, poor quality of life, poor well-being and fatigue,” the authors wrote.

“These symptoms may be causally related to multiple factors and not just the original SARS-COV-2 infection.”

In addition, the researchers said persisting post-COVID-19 symptoms in adults have also been shown to decline in a similar pattern. Previous studies in British adults showed the five most prevalent reported symptoms were fatigue, shortness of breath, muscle pain, cough and headache, overlapping with the most common symptoms described in the adolescent study.

In their future study, the team will continue to analyze survey results from children for up to two years after the initial COVID test.