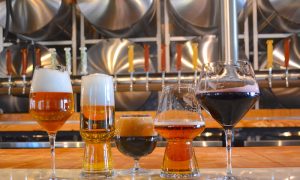 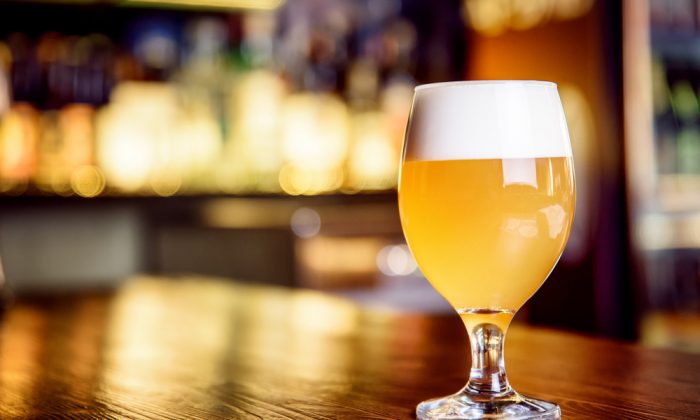 With hazy beers, you'll see the difference before you even taste it. (Shutterstock)
Drinks

Several years ago, a college friend, then living in Vermont, came back to the Midwest to visit family and brought me a single can of beer, holding it forth with veneration as if bestowing on me a religious relic. Heady Topper from The Alchemist.

I’d only heard about it, as I lived far from this brewery’s market (Vermont only), and apparently only had one friend willing to drive halfway across the country to deliver a can.

It’s a double IPA, an India Pale Ale with a bumped-up amount of hops and malt and a higher alcohol content—in this case, eight percent by volume. (If you dislike bitter beers, don’t stop reading at the sight of “IPA.”)

Ignoring the instructions on the can to drink directly from it, I poured Heady Topper into a pint glass: a cloudy, golden, delicious beer.

I didn’t know it at the time, but I was drinking what would become widely known as a New England-style IPA (NEIPA). Following its sudden widespread popularity came the arguments of whether this was a real style or not, until in 2018, the Brewers Association officially listed “Hazy or Juicy” as a style for pale ales, IPAs, and double IPAs in their style guidelines.

Then it seemed like everyone was making one, and a good number of brewers worked “Bandwagon” into the beer name as they jumped on it. One of my local breweries, resistant to making one, amusingly served its IPA with a shot glass of flour on the side in case you wanted to muddy it up.

As the style’s name suggests, the beer is unfiltered and cloudy in appearance—unlike, say, a crystal-clear pilsner—and typically delivers flavors that call to mind fruit juices. They are often smooth and creamy, with a thicker mouthfeel.

Other New England brewers such as Tree House Brewing and Trillium Brewing have built a reputation for NEIPAs, and on beer rating sites, their brews, along with Heady Topper, fill up lists of Top 20 IPAs.

Hoppy beers, as these are, have always been a little divisive—but often because some beer drinkers have held “hoppy” to be synonymous with “bitter.”

Hops do provide that element to balance the sweetness of malt, and even that American light lager you might be drinking has hops for that purpose. But it’s more complicated than that.

Adding the hops early or late in the boiling part of the brewing process—or later in fermentation, known as “dry-hopping”—changes the flavors they impart, as does combining different varieties of hops from the constantly growing number of them out there.

Depending on what hops the brewers choose and when they add them, you can get a whole range of fruity, piney, citrusy, resiny, and musky flavors, and even a double IPA with a very low bitterness. If you like those sorts of flavors, but the bitterness not so much, the hazy, juicy NEIPA beers might be for you.

But long before that glass reaches your lips, you will see the difference: that haze. Haze can come from suspended yeast, aggressive dry-hopping, and proteins in high-protein grains, such as wheat or oats.

The beer’s characteristic juicy flavors, meanwhile, come from esters, organic compounds produced by yeast, which bring fruit flavors despite the absence of any real fruit.

Joe Walts, head of quality control at Ale Asylum in Madison, Wisconsin, admits he didn’t really have an appreciation for NEIPAs until they inevitably produced one.

“Too much haze is ugly, and the taste is gritty and unpleasant. It’s easy to make a beer look hazy, but far less easy to create the amount of haze that customers expect without the beer becoming muddy, swampy-looking,” he said.

At Ale Asylum, in their early attempts, they got a haze from some added flaked oats and an American ale yeast—“but over three weeks, the haze and fruitiness dropped out,” Walts said.

They switched to a London Ale yeast, the same yeast used in Boddingtons in the UK, and found that the resulting esters were fruitier than the American ale yeast’s, and gave the beer the juicy quality they were aiming for.

But as Walts points out, yeast haze is naturally unstable, so it will settle out eventually, no matter what. (Note the yeast in the bottom of a bottle of German hefeweizen, a yeasty wheat beer that is also initially hazy.)

As a result, time is not a friend to most beers, but especially not to this one. Says Walts, “The style is loved at small breweries where the beer is fresh. If it travels, it loses character. More than a month, forget about it.”

Your best bet is your local brewery’s taproom. If you have no friends traveling from Vermont, try Tree House’s Julius from Massachusetts. From the opposite coast, Deschutes Fresh Hazy IPA is widely available, and Iowa’s Toppling Goliath, brewers of King Sue, is gradually expanding beyond the Midwest.

If you think the can you have is stretching the limits of freshness, turn it upside down for a few moments to put some of that yeast haze back into the mix.

Whatever you do, don’t leave this in the back of the fridge for a special occasion; drink it while it’s fresh!