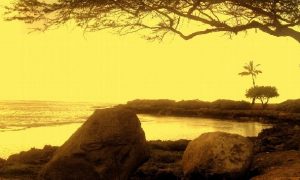 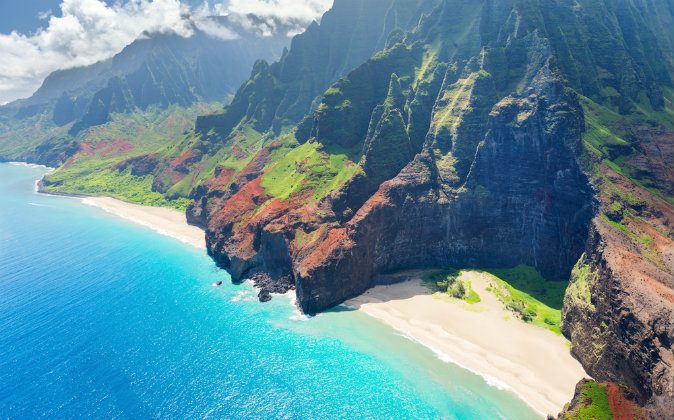 A view on Na Pali Coast on Kauai(Shutterstock*)
Destinations

There’s a vacation in Hawaii many travelers don’t take. It’s not Thailand cheap, so it’s easily dismissed by the penny pinching backpacker. Being raised on Oahu, family trips off the island were too expensive. A cheap staycation that everyone liked? Beach camping.

You’ve got this notion Hawaii is kitschy luaus, honeymoons, and Tiki bars.

Kauai is the first of eight islands formed. The jagged hills give it the landscape Jurassic Park films so coveted. If Land Before Time oasis existed, this is it. You literally feel a T-Rex is going to invade your grill.

The stretch of island boasts more coastline than any of the other Hawaiian islands. It’s pretty easy to find your own sprawl of secret beach. Plenty pf recommendations came from hippies living out of their vans.

Dismiss those familiar pretenses of camping for a second. Imagine bath water temps breezing through an open tent; a stone’s throw from cobalt blue ocean calling your name. You’ll hike with wildlife you won’t see anywhere else on earth, and one snorkel adventure away from getting cozy with a sea turtle. Suddenly those sleeping pads don’t seem so bad.

How to Get a Permit:

Getting a permit takes an old-school attitude. No e-mails. You handwrite it in, or apply in person. Both are made very easy by an amicable clerk staff. They only accept money orders in person. I sent a whopping $45 check via snail mail and had permits printed a week later. Visit this website for more information.

On our trip, my sister and I went counter-clockwise around the island, handpicking sites near towns we wanted to see. Here’s a list of places we crashed:

Word on the isle is Lyndgate Beach Park is peppered with transients, so we avoided it.

Kauai Beach House Hostel–In Kapa’a, we hauled from Lihue Airport to here. If you want to be in a spot that doesn’t shut down at 9pm, this is the slice of Kauai nightlife. The hostel owners are friendly and resourceful. On your way out, grab a Hamburger Steak or Mac Pancakes at Ono Family Restrauant, a joint full of local vibe and devoid of sugary tourism.

Most of the campsites are located in blink-and-you’ ll-miss-it roads miles away from the one lane “highways.” Places on Kauai also close up shop early. If you’re planning to drink far away from campsite after dark, you might as well bunk down in your car. Some are more “tourist-friendly” than others, and some will be cluttered with local families, such as Anahola and Haena.

Waimea Canyon: For around $20, you can lay your head at the lip of the red vastness that is the Waimea Canyon. Here’s how:

You can claim a patch of grass at Kokee. Their world-renowned Kokee Lodge Restaurant is the best diner because, well, it’s the only one you’ll see. If camping here, bring warm clothes or a stern resolve. This area is made for a more craggy breed of camper:

There’s also YWCA’s Camp Slogget, which looks like the summer camp of your childhood. Spend the night bunkbed style for $15.

Make sure you have everything you need before you make the trip up to the canyon to post for the night. It’s a long, winding journey up in the clouds. No one wants to make it twice because your forgot some batteries.

March and April are the rainiest months and much cooler, making it harder to take off your camp grime. Your airline ticket will cost about $400 extra to sit in the rain during a mid-March trip. Mid-April seemed more favorable. Locals boasted June-August had some reliably sunny weather.

Add plenty of towns to your weather app. Before you venture out, check the forecast. Chances are, if it’s rainy and gray on one side of Kauai, you can drive to much improved skies. Hanapepe and Poipu Beach were shoe-ins for the best temps when we visited.

I booked my flight through Allegiant, which has a rap of bad reviews. My take? If you’re ok without a reclining seat and can withstand a couple hours minus in-flight entertainment, it’s a decent save. My flight did arrive an hour late, but paying $280 one-way during peak season saved me $400. Seems pretty even on the “time is money” ratio. Land in Oahu, then hop on an interisland flight to Lihue. Mine cost $90.

Copyright © 2014 by Go Nomad. This article was written by Cristina Romento and originally published on www.gonomad.com

*Image of sun set via Shutterstock