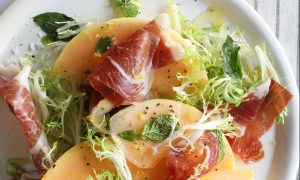 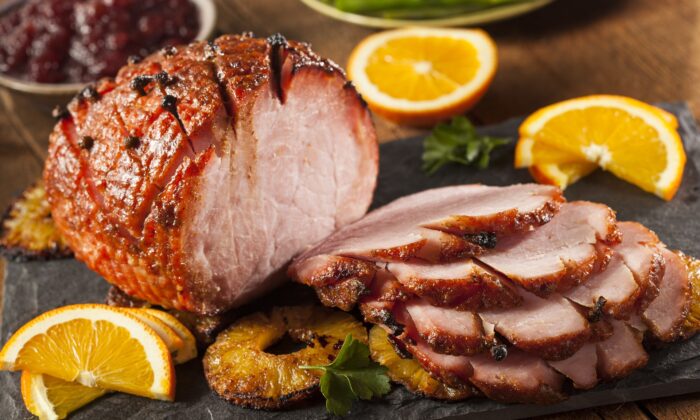 The alcohol in this bourbon-spiked glaze burns off when you cook it, leaving behind smoky, honeyed notes that complement the apricot and maple syrup. (Brent Hofacker/shutterstock)
Recipes

Ham It up for Easter

A glazed ham is an easy way to prepare a celebratory Easter dinner—or any dinner, for that matter. It’s also a gift that keeps on giving, yielding a generous portion of meat that can be shared and repurposed in sandwiches, eggs, hash, soups, and salads.

Ham is so easy to prepare because you begin with a fully cooked store-bought ham. The long cook that you will do in the oven or on the grill is essentially a long warm-up, to thoroughly heat the meat and finish the process with a glaze toward the end of the cooking time to give it a crispy, glossy sheen. The glaze can be simple but should include fruit and sugar, which will naturally balance the saltiness of the ham, while ensuring a crispy, caramelized lacquer.

The glaze in this recipe is spiked with bourbon. The alcohol burns off when you cook the glaze, leaving behind smoky, honeyed notes that complement the apricot and maple syrup. A little mustard and lemon juice add body and sharpness.

For best results, purchase a good-quality ham with the bone or partial bone in, which adds more flavor to the ham while cooking. Avoid a spiral ham, because it will easily dry out. Roast the ham in the oven or, better yet, on the grill. Grilling the ham creates another dimension of flavor from the smoke, and also frees up your oven if you have other dishes to prepare. This recipe provides instructions for both methods.

For the Apricot Bourbon Glaze

Remove the ham from the refrigerator 30 minutes to 1 hour before cooking. With the tip of a sharp knife, score the rind and about 1/4 inch of the fat in a 1-inch crisscross pattern on all sides except the cut side.

Combine the glaze ingredients in a small saucepan over medium-low heat. Simmer until the preserves dissolve, stirring frequently, about 5 minutes.

If oven roasting, preheat the oven to 300 degrees F. Place the ham cut-side down on a rack in a large roasting pan. Pour 1/2 cup water in the bottom of the pan. Cover the pan with foil and roast in the oven for 1 1/2 hours. Remove the foil from the ham and brush with some of the glaze. Continue to cook without the foil until the internal temperature registers 135 degrees when an instant-read thermometer is inserted close to the bone without touching (about 1 to 1 1/2 more hours more), brushing the glaze over the ham every 20 to 30 minutes or so. The ham should develop a deep mahogany color. If it gets too dark before the ham reaches the desired temperature, loosely cover with the foil for the remainder of the cooking time.

If using a grill, prepare the grill for indirect cooking over medium-low heat (about 300 degrees). Place the ham directly in a grill pan. Grill over indirect heat with the grill lid closed for 1 1/2 hours. Brush with some of the glaze. Continue to cook until the internal temperature registers 135 degrees when an instant-read thermometer is inserted close to the bone (about 1 to 1 1/2 more hours more), brushing the glaze over the ham every 20 to 30 minutes or so. The ham should develop a deep mahogany color. If it gets too dark before the ham reaches the desired temperature, loosely cover with foil for the remainder of the cooking time.

Transfer the ham to a cutting board and let rest for 20 minutes. If desired, pour the pan juices into the remaining glaze. Carve the ham into serving pieces and serve with the glaze.

Lynda Balslev is a cookbook author, food and travel writer, and recipe developer based in the San Francisco Bay Area, where she lives with her Danish husband, two children, a cat, and a dog. Lynda studied cooking at Le Cordon Bleu Ecole de Cuisine in Paris and worked as a personal chef, culinary instructor, and food writer in Switzerland and Denmark. Copyright 2021 Lynda Balslev. Distributed by Andrew McMeel Syndication.