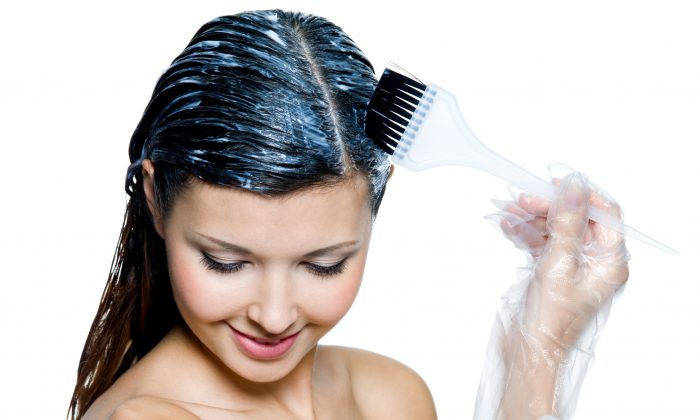 Studies assessing the hazards of synthetic hair dyes are limited and conflicting. Your safest bet is to use plant-based dyes. (Valua Vitaly/iStock/Thinkstock)
Health

NEW YORK—Have you ever wondered if coloring your hair is safe for your health? With toxic chemicals like para-phenylenediamine (PPD) found in most hair dyes, you have a right to be concerned.

PPD is used in permanent hair dyes and other dark-colored cosmetics. It is a colorless chemical that becomes pigmented when mixed with an oxidizing agent—usually hydrogen peroxide.

The Environmental Working Group classifies this compound as an above-moderate health hazard, mostly for the allergic reactions it can induce. Hives can appear from PPD use on occasion. In much more rare instances, serious anaphylaxis can also occur.

Studies assessing the health hazards of hair dyes are limited and conflicting, but professionals who use these products on a frequent basis appear to be at a greater risk for cancer.

Several studies evaluating hairdressers and barbers found an increased risk of bladder cancer, and the International Agency for Research on Cancer has classified some of the chemicals they use as “probably carcinogenic to humans.”

Some studies on hair-dye users found a link with blood and bone cancers, such as non-Hodgkin lymphoma and leukemia. However, other studies did not show this link. No study has linked hair-dye use with breast cancer.

While none of these studies specifically focused on PPD, Dr. Robert Dorin, a hair transplant surgeon in Manhattan, said it’s best to avoid all hair products with this chemical.

The hair dyes that potentially pose the most risk are dark-colored permanent ones. In addition to containing the most chemicals, they are typically mixed with an oxidizing agent to produce a chemical reaction that changes the pigment in the middle layer of the hair (cortex).

When laboratory animals are fed large amounts of hair dye ingredients over a long period of time, these chemicals cause cancer. In the case of skin application, however, no correlation with cancer has been found, even though the chemicals do enter the animals’ bloodstream, according to the American Cancer Society.

Hair dyes can cause a variety of problems, noted Dorin, including hair damage, allergic reactions, immune problems, and even neurological problems.

“Hair damage occurs after repeated use because the hair cuticle is being stripped of its natural oils, and pigments in the cortex are being damaged or removed by stringent chemicals in the dying process,” he explained.

“Allergic reactions can present themselves in the form of eye or skin irritations, burning sensations of the scalp, headaches, and respiratory problems,” Dorin added. “Neurological problems can occur due to some chemicals like lead acetate found in many of the products.”

Temporary and semipermanent dyes are generally considered somewhat safer than permanent options. Temporary synthetic dyes that only coat the hair aren’t as damaging.

The Food and Drug Administration (FDA) relies on manufacturers to test hair dyes and cosmetics for safety and to accurately label all ingredients. The FDA will only investigate products after there is cause for concern.

In the 1970s, the FDA dictated removal of certain chemicals from hair dyes after they were found to cause cancer in laboratory animals. Despite such oversight, however, there remains some room for healthy suspicion.

This point was underscored earlier this year when Swedish researchers discovered banned hair-treatment chemicals in the blood of hairdressers.

More than 5,000 different chemicals are used in various hair-dye products worldwide. According to the National Cancer Institute, some of these may be carcinogenic. Thus, it’s a good idea to err on the side of caution.

Some salons offer semipermanent synthetic dyes with lower concentrations of dangerous chemicals than conventional options. But the safest choice, according to Dorin, is to use plant-based dyes like henna.

Henna gives hair a reddish hue, and other plant-based dyes are now available for blond or brunette coloring. While they may not give you color that lasts long, they offer a much greater peace of mind.