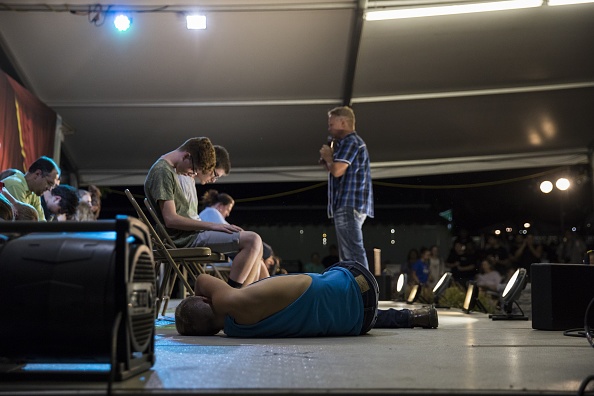 A boy lays on the stage after falling out of his chair while hypnotized during a comedy show at the Montgomery County Agricultural Fair in Gaithersburg, Md., on Aug. 19, 2017. (Samuel Corum/Anadolu Agency/Getty Images)
Alternative Health

Irritable bowel syndrome (IBS) is the term used for a number of conditions that result in the same symptoms: inflamed and painful bowels, bloating, abdominal pain, and bloody diarrhea.

More than one in five people worldwide are afflicted by one or more of these conditions. They can be hard to treat and can often alter the quality of life of those suffering from them, which is why IBS has been the topic of research for many years.

A new study has found that a somewhat counterintuitive method of therapy may reduce the symptoms of IBS. The researchers measured whether hypnotherapy could benefit those suffering from the bowel condition in their recently published article. They recruited 354 adult IBS sufferers, aged 18 to 65 years of age, for the research. Each of the participants was referred to the researchers from primary health care facilities

The participants were divided into three groups based on the type of care they would receive. The group assignments were randomized. The control group was assigned to education and support care therapies. The two experimental groups were assigned to attend the 45-minute hypnotherapy session twice weekly for six weeks.

One group was assigned individual sessions, and the others were assigned to group sessions, to determine how this would impact the benefits of the therapy. The experimental group patients were also provided with a CD so they could continue practicing hypnotherapy on their own for 15–20 minutes every day.

The results showed a 40 percent decrease in the symptoms experienced by the participants who received individualized hypnotherapy sessions and a significant 33 percent reduction in symptoms for those in the group sessions. These numbers are particularly significant in comparison to those who were treated with education and supportive care who only reported a 17 percent decrease in their symptoms.

They found that for all three groups these rates of symptom decrease were consistent after nine months. There was no decrease in the severity of any of the participants’ symptoms, however, which is important to differentiate from frequency of symptoms.

“Our study indicates that hypnotherapy could be considered as a treatment option for patients with IBS, irrespective of symptom severity and IBS subtype,” said the study’s lead researcher, Dr. Carla Flik. “It is also promising to see that group hypnotherapy is as effective as individual sessions, which may mean that more people could be treated with it at lower cost, should it be confirmed in further studies.”

“What’s striking about these findings is the extent to which patient’s perception of their illness affects their suffering, and that their perception of symptoms appears to be as important as actual symptom severity.”