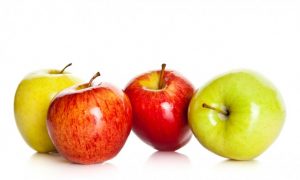 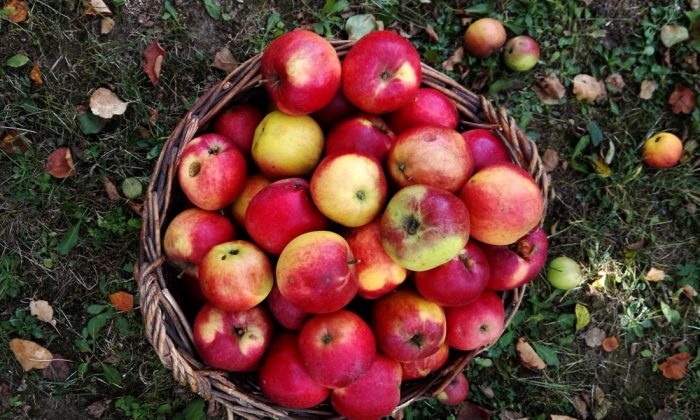 Beyond the supermarket, a wide, colorful world of apples awaits. (Shutterstock)
Food & Dining

Strolling through my local farmers market, I stop to see a spectacle: Apples scattered across a vendor’s table look like the cantina scene out of a fruit version of Star Wars.

The colors are all wrong, as are the shapes and flavors. Some are russet and rough-skinned like a potato, others list “strawberry” or “banana” in their profiles. Blue Pearmain? Yellow Newtown Pippin? Holstein? Isn’t that a cow?

As I scan the apple vendors, I’m seeing dozens of names. Why have I never heard of so many of these? And just how many varieties are there?

The Apple Hunter’s Guide to the Galaxy

For answers, I went to Dan Bussey, an apple historian and former orchard manager at Seed Savers Exchange in Decorah, Iowa. His magnum opus, “The Illustrated History of Apples in North America,” won the Council on Botanical and Horticultural Libraries’ Annual Literature Award in 2018.

The encyclopedic work comprises seven 500-page tomes with detailed information about every apple mentioned in publications since the 1700s. That’s 16,468 different varieties, though Bussey estimates less than 6,000 still exist. And that’s only North America.

With all due respect to Forrest Gump, life is less like a box of chocolates and more like an apple seed: you truly never know what you’re gonna get. Most plants produce the same variety of fruit from their seeds, but apple trees roll the genetic dice every time. The seed from an apple almost never results in a tree that produces that same apple. We have consistent Fujis and McIntoshes only thanks to grafting: taking a cutting, known as a scion, from a tree of favored apples, and attaching it to the roots of another apple tree. From this grows a “clone” of that variety you fancy.

It seems strange that the average supermarket doesn’t even offer a dozen. Commerce can have that effect, said Bussey.

“The old varieties were perfectly fine,” he said, “but if they don’t sell, the farmer won’t grow them anymore.”

Commercial decisions have eliminated apples worse than any blight could. Take the Red Delicious, today’s typical supermarket apple, which is as ubiquitous as it is boring. “Red Delicious were always selected for looks, but none of them were ever selected for flavor, Bussey said.

Even before the Red Delicious, “there was the Ben Davis,” he continued, its century-old predecessor that was “equally despised” by lovers of good apples. Both dominated the produce bins because they shipped well.

“We’ve lost a lot of superior apples due to really no good reason,” said Bussey. “So we are trying to hold on to some of those and bring them back and say, ‘These were pretty good apples back in their day, and they still are.’”

Not all the apples of yesteryear’s markets are lost, however. Orchards have preserved many, of course, and as for the varieties brought back from obscurity, you can thank “apple detectives.”

The term went mainstream in 2015 when David Benscoter, a retired federal investigator, made headlines after discovering numerous “lost” apple varieties, including Nero and Fall Jenetting, growing in the forest of a Washington state park—more than a century after the trees had been abandoned.

To identify the apples, Benscoter turned to Temperate Orchard Conservancy (TOC), a nonprofit organization on a mission to “preserve and share the genetic diversity of tree fruits.” In 2016, the TOC finished grafting scions from over 4,000 different varieties of apple trees from the Botner farm and orchard in northwest Oregon, the largest private collection in the United States.

TOC founder and president Joanie Cooper is not surprised by the survival of untended apple trees. In fact, some of the apples, she tells me, do reproduce themselves without seeds. Trees called “walkers” may topple—perhaps in a storm—and if that original root system remains connected, branches above the graft can put down roots where they touch the ground, creating another tree with identical apples.

Once a new variety is identified, finding its lost name is difficult. Apple detectives pore through market records, date trees, and even compare them to old watercolor pictures of fruit (the USDA has an online library of them).

TOC has been adding new trees each spring, as it works with local historical societies throughout the region to locate old homesteads that may have surviving apple trees. Washington State University has an interest as well in providing a list of trees that were in the campus orchard in the early part of the 1900s. “The orchard is gone,” said Cooper, “but having that list helps a lot because we know a lot of the homesteaders got scions from those trees and they are in the community. If we’re lucky, they’ll be there.”

Their latest find, Sary-Sinap, a summer apple that ripens in August, was first recorded in Crimea in the late 1700s. One of Benscoter’s growing troops of apple detectives turned it up. An article in a local paper drew hundreds of responses from people, and suddenly they had a thousand more trees to look at.

The conservancy is passing its finds on to the rest of us. “For the last four years, we have been providing scions for people at their homes,” said Cooper. “Anybody can order scions from us in January. Ultimately, we want to be able to offer grafted trees for people.”

Fruits of the Future

“There are more apples released in the last five years than I can remember in a very long time,” said Bussey. Many are improvements on Honeycrisp, a variety patented by the University of Minnesota. Bussey calls those “country club” apples, and the rights to grow such fruits are controlled.

Making its debut in 2019 is the Cosmic Crisp, developed by Washington State University, and, so far, only available from growers in Washington. Also being produced are GMO apples that won’t brown when exposed to air, but Bussey waved those off: “There are a lot of good apples that don’t brown that much anyways.”

With modern agriculture’s reliance on pesticides and fertilizers and even genetic modification, the century-long survival of an unattended apple tree should be humbling, and diversified varieties may have something to teach us about the survival of our crops.

As we race to make the perfect stereotype of an apple, a whole world of tried and trusted and deliciously diverse ones is finding its way back onto market tables.

Many of those old varieties are best used for cider, while others do well in pies. Still others are waiting to simply have a bite taken out of them, even if they might not recommend themselves by appearance.

An old English variety called Knobbed Russet looks like “a diseased potato,” Bussey said. The tree looks like it is full of shrunken heads. “It’s truly homely,” he said, but “we did a taste test among 60 varieties in Des Moines a few years ago and, when cut up to hide its looks, it won first place.”

Another variety, the Geneva Crab, has beet-colored flesh that, when cut crosswise, shows a white star shape around the core. Perhaps the spookiest, however, is the Black Amish. “The fruit is so dark-colored that when ripe, it looks completely black and very eerie,” Bussey said.

Bussey recently retired from managing orchards, but continues his historical pursuits in fields and libraries. Since the publication of his encyclopedic work, his continuing research has turned up another 1,000 apple varieties—almost enough for an eighth volume.

Got some mystery apples? Temperate Orchard Conservancy receives apples in the mail from around the country and can uncover their identities. They are happy to answer questions by email as well. More information can be found at TemperateOrchardConservancy.org