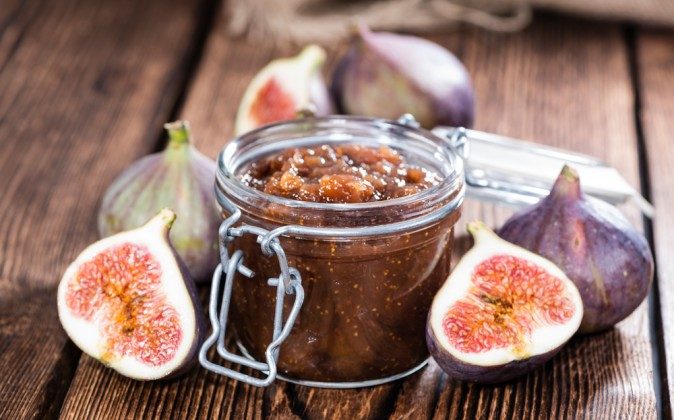 Many Americans are only familiar with dried figs, but fresh figs are a delicious treat available in the summer and fall seasons. Figs are commonly grown throughout the Mediterranean region as well in the southern part of the United States. Figs were eaten by the Sumerians as early as 2900 BC, and figs were one of the earliest cultivated fruits, eaten in Ancient Greece and Rome. Figs originally came to the Americas from Spain in the early 1500s, and by the 1800s there were many varieties growing in California. A fig is actually not a fruit at all, but a flower inverted into itself; the small seeds found inside the fig are the true botanical fruit.

Figs range in color from pale yellow to brown to purple. These are a few of the common fig varieties that you might encounter throughout the season:

There are about 60 different varieties of figs grown throughout the United States today. Like other high-nutrient fruits, figs are rich in fiber, minerals, and polyphenol antioxidant compounds; eating figs has been shown to increase the antioxidant capacity of the blood, which could help to prevent oxidative damage in the body. Figs, similar to beans and oats, are notably high in soluble fiber, a nutrient with cholesterol-lowering properties.

Soft fruit with sap coming out of the end opposite the stem means it is ripe and has a high sugar content. Because they spoil quite easily, refrigerate them as soon as they ripen.

It is so much fun to grow your own figs as they are easy to grow almost anywhere in the United States if you have any space in your yard or on a balcony. All you need to do is plant them in a big pot with good water drainage and if you live in the northern states, just wheel the potted trees into a garage or shed, between Thanksgiving and April 1st. You can trim them back before the winter so they easily fit indoors, and use the cuttings to start another tree. This way you can have as many fig trees as you want in a few seasons, from buying just one tiny sprig of a tree.

*Image of “fig marmalade” via Shutterstock