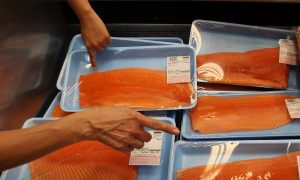 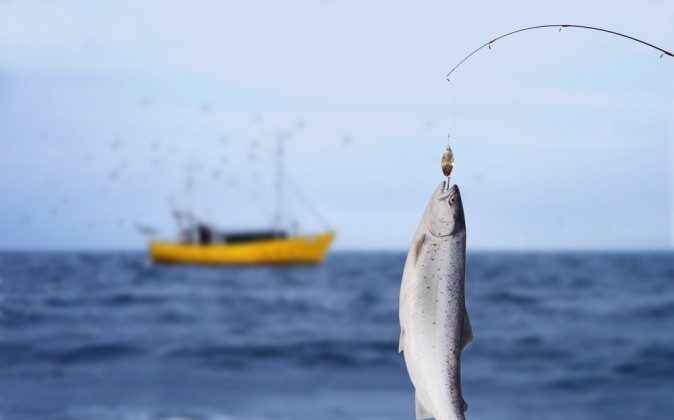 Goeden is a research fellow and advisor to the National University of Malaysia and marine consultant to the Andaman Resort, Langkawi.

The Genetic Danger of Farmed Fish

Although the FDA has not yet ruled on whether it will approve GM salmon for human consumption, U.S. company AquaBounty has already begun scaling up production of eggs for the GM fish in anticipation of a favorable ruling. If the GM salmon are commercialized, Goeden warns, they will only exacerbate the serious problems already caused by farmed fish to wild fisheries worldwide.

According to the Food and Agriculture Organization, 70 percent of the world’s wild fisheries have already failed or are in danger of failure due to overfishing and habitat destruction. This has led to an explosion in fish farming, such that 50 percent of the fish consumed globally is now produced from farms rather than caught at sea.

Salmon in particular have become so heavily farmed that farmed fish now drastically outnumber wild fish globally. These farmed salmon have been selectively bred over several generations (from combinations of different wild strains) to be faster growing and consume less food than wild fish.

“Around 95 percent of all salmon in existence are farmed,” said Matt Gage from the University of East Anglia, “and domestication has made them very different to wild populations.”

The only thing that enables this fast growth is the artificial conditions in which the fish are raised; if they had to live their entire lives in the wild, they would quickly be wiped out. In the short-term, however, farmed fish are able to outcompete wild fish by growing to sexual maturity faster and eating less food. And in spite of industry assurances, large numbers of farmed salmon have been proven to escape into the ocean each year, where they do indeed outcompete wild fish. A 2012 study into the fish stock collapse at the Sacramento River Chinook salmon fishery, published in PLOS One, found that wild fish had been overrun by hatchery fish to the extent that the wild population will probably never recover.

Another major threat to wild salmon is interbreeding with farmed fish, who spawn in the same rivers as their wild relatives. Genetic mixing dilutes the fitness of wild fish, making them less able to survive in a natural environment. A study published in PLoS Biology in 2008 found that when wild fish were exposed to hatchery-bred fish, their abundance fell by an astonishing 50 percent. A 2009 study in the journal Science found that crossbreeding with farmed fish had so genetically hampered wild steelhead trout (a close salmon relative) that they could no longer reproduce at the levels needed to maintain their numbers.

GM fish: Worse in Every Way

According to research conducted by Fredrik Sundstrom of the University of Gothenburg, Sweden, the GM salmon would have an even greater impact on wild fish than currently existing farmed fish already do.

“If transgenic fish become established in natural stocks they would be able to out-compete the natural breeds,” he said.

The GM fish are Atlantic salmon engineered with genes from eelpout and from Pacific Chinook salmon to enable them to overproduce growth hormones and grow two to six times faster during the winter.

“What we must keep in mind is that this animal has never existed before; it is new to the planet; we made it,” Goeden writes. “We really have no idea of what it will do when we lift it off the ‘operating table.'”

*Image of “salmon on fishing rod” via Shutterstock