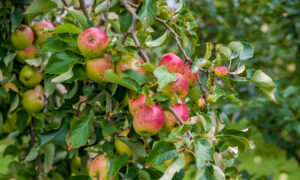 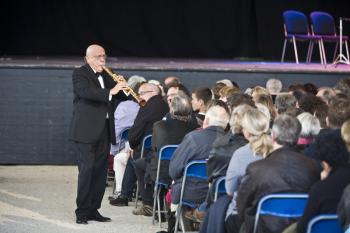 Matthias Kehrein
View profile
Follow
biggersmaller
Print
The listening environment is more powerfully impacted by calm and quiet than by noise. In his performances throughout the world, clarinetist Giora Feidman casts a spell of tranquility over his audiences.

While on tour in Germany, the agile 72-year-old spoke to us about the respectful quiet of audiences during his concerts, his view of music as a basic human need, and his experience of performing before an audience of 800,000 people.

Epoch Times: You were born in Buenos Aires and lived in Israel.

Feidman: Yes, I have lived in Israel for 51 years.

ET: You travel a lot.

Feidman: I spend most of my time in Germany. Next week I will perform in Vienna and then in Jerusalem. I am always on the move—that is normal for me.

ET: You have traveled to many nations. Where do you feel most at home? In Israel?

ET: What do you like about Germany? Do you feel a connection with the German people?

Feidman: Other nations consider me a guest. They treat me as a guest—the way one customarily treats a guest. But in Germany, I am at home.

One of the reasons for me to be here is that I am Jewish, and the Germans and Jews live a normal existence together. The realities of life have dictated that.

We were born here to live together and not fight one another. And that is actually happening in Germany now. I walk the streets, not as a victim, but as a normal human being. And that represents something significant for me. It is like a powerful magnet—to be able to have such a feeling here in Germany.

I am also looking forward to my return to Israel. Our generation has this privilege to return home—to Judaism, to solitude, to a place where one can find oneself.

Serenity as the Key for Finding Oneself

ET: You performed with your trio in Bonn yesterday. How did that go?

Feidman: The performance was in a huge open-air tent—not in a concert hall. There were sounds of cars and even a train, but there was also a powerful feeling of serenity and peace inside that tent.

It is interesting to be at a location with so much noise and still be able to touch time. The peacefulness overpowered the noise. I have often played there and had this experience.

One can encounter such experiences at other locations, too. When I entered the tent, the sensation of tranquility was tangible despite the noise. Serenity is more powerful than any interference from noise. That is not merely a statement—I truly experienced it yesterday. The audience felt it, too, though they may have been unaware of it.

What is primary is finding oneself. Outside factors can interfere and prevent one from encountering the inner self.

What do I mean by "finding oneself?" What does one find? One finds the soul and meets with it.

ET: So, did the audience members find themselves yesterday?

Feidman: There was serenity and calmness—the things that are necessary. When you refrain from noisiness, it is possible to find yourself.

One can manipulate people into silence with technical means and stop them from speaking, but the actual energy I call serenity was also there. It was the over-riding energy presented in the concert.

Singing and Dancing are a Necessity

ET: Do you have a goal when making music?

Feidman: Singing and dancing—those  are the natural forces. They are necessities, like eating, drinking water and sleeping. One must sing.

Newborn babies tell their mothers: “If you want to communicate with me, I only know one language. You must sing to me!” There is not a mother on the whole planet who does not sing to her child. Could an electric guitar substitute for that?

And once the baby takes your left and right hand, he is asking you to dance. The mother thinks the baby will someday be an athlete—he dances!

Dancing and singing are so necessary, but in Western society these natural forces have no resonance. Traveling to Tibet, China, or India, one realizes how many people are aware of this. In the West, though, people concentrate on the practical aspects of everyday life and care so much about being comfortable.

ET: What is your mission as a musician in this regard?

Any performance, no matter where it is given—along a street, in a concert hall or during a funeral—serves society. The musician uses his instrument to give his very best. My father was also like this.

ET: That comes across during your concerts. Many people discuss how your music elicits far-reaching emotions.

Music From Another Realm

Feidman: Evening after evening, I become aware of a meeting of the minds and souls in another realm. Music is an art, and all great art originates from other dimensions.

Each time a performance meets it mark, whether it is dancing, painting, sculpture [or writing], one has successfully shared this experience with others. One might say that artists are a channel to bring works from other dimensions to this place.

Art that is commonly produced, that is, without respect for these natural forces, is only a paltry contribution. Mankind never gets it that art must not flow through the brain’s awareness. The brain produces nothing. When making music or listening to music, the brain is not involved.

ET: So you simply play?

Feidman: I began as a child when my father handed me a clarinet. I thought it was a toy, and it remains a toy for me to this day. I play with this wonderful toy.

Many people approach me after a performance and tell me, "You know, I used to play clarinet, but since I listened to you I have taken up the instrument again because you make it look so easy.” It looks easy and is easy. But our culture calls it "education," and this key word that we use is wrong.

ET: So you would say every person could make this discovery?

Feidman: Yes, everyone! We walk, we speak, we sing, we dance. Now we think one must study at the best, most expensive university—but is that what truly creates an artist?  I am not saying one should not study music. But before taking that step, one needs a real teacher—someone who understands the real source of the music.

Feidman: Age does not matter. Forget age. People comment, "You have so much energy at 72. I do not know what 72 years is supposed to mean, but I do know the meaning of ample energy. I am aware of having it and must utilize it to do what I need to do! This is a recurring theme in all art—energy!

ET: During the 2005 World Youth Day in Cologne you performed for the Pope and 800,000 listeners. Can you tell us about that experience?

Feidman: (Laughing loudly) Sorry, but I am quite familiar with this question. Yes, it was a grand moment. I was alone there—two kilometers (1.24 mi.) from the last amplifier. The sound system technician came to me after the concert and said the sound two kilometers away was quite good. Two kilometers! (Laughs loudly) That was quite an experience.

Occasionally I sense a connection. It comes to me almost as a question. Was it really me who played or was it another energy? It really makes no difference whether I play for an audience of one or 800,000. When one performs with one's soul, the soul does not care.

ET: What is it like to perform for a few?

Feidman: On one occasion the German TV media took me to New York, placed me on 5th Avenue, and told me to play on the street—excellent! When I have fear, I begin to play.

No one stopped me from playing—no one! I played and played, and I was able to move people. It was fabulous! People needed to listen, and then many of them didn’t want to leave. There was a true sharing. Only real people can do such a thing. By contrast, in a concert hall nothing starts until the audience is quiet. Here, people became quiet as soon as I began to play.

I was privileged to play with the Israel Philharmonic Orchestra twenty years ago. To this day I play chamber music, which is easy. Playing on the street—to get people on the street to pay attention and listen is something completely different. They actually gave me money!

Interestingly enough, I was playing a concert that evening and the contrast was notable. The concert hall becomes quiet, and I begin to play. Do the listeners on the street consider a street musician a second-class citizen? No.

ET: Is there a universal acceptance of what you are playing, whether it is Mozart or something else?

Feidman: I will give you an example: During the war I went to play at an Israeli hospital. I played the piccolo flute in a room meant for ten patients which was packed with 30 wounded soldiers.

A terrorist attack had just occurred, and there were many wounded people there. I walked from one injured soldier to the next and came upon a young Arab. I could not speak Arabic.

The nurse asked him what he wanted me to play. He replied, "Something similar to what you had played for the men over there." "You really liked that?" “Yes."

I played Mozart for that fellow. What a huge lesson he taught me! To him it was a song—not Mozart, not classical music—simply a song! I would like to meet him again. This happened 40 years ago in the Six-Day War.

ET: Mr. Feidman, many thanks for the interview.