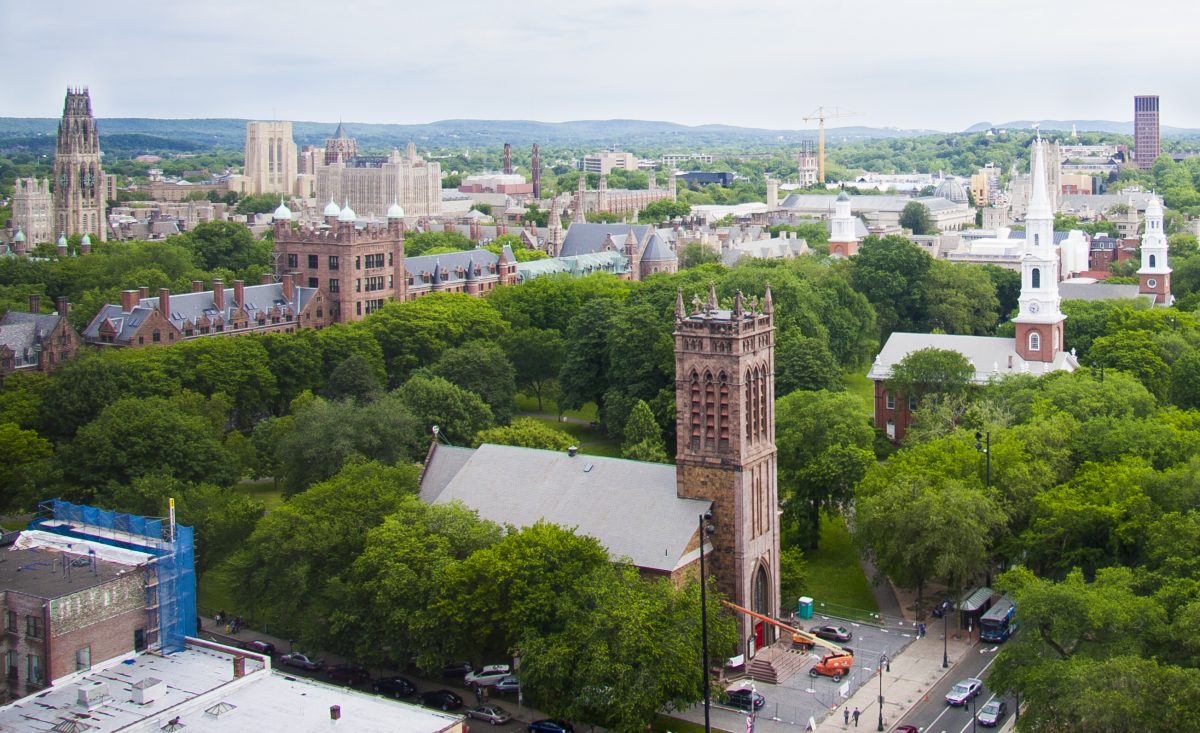 Getting Schooled in New Haven: Lessons in History, Culture, and Food

NEW HAVEN, Conn.—In New Haven, you can easily find something to whet your intellectual appetite. The city’s connection to Yale University has always imbued its streets with arts and culture.

For many years crime and urban decay dominated the landscape, but after decades of economic investment, the college town has reemerged as a cultural destination.

Beginning in the 1980s, private developers bought vacant buildings in downtown, hoping to revive the area. Factories that made up New Haven’s old economy were converted into apartments.

With more people moving into downtown, exciting eateries have sprung up. Some are preparing food in ways common to big city restaurants: baking their own breads (G Cafe Bakery), smoking their own meats (Ordinary), using French techniques with a range of American flavors (Atelier Florian), and employing cheesemongers to assemble cheese plates (Caseus Fromagerie & Bistro).

Colin Caplan, a New Haven native, has seen this transformation firsthand. But he also recalls experiencing the city differently from what was portrayed on the news.

“There was always a sense of community. We knew all of our neighbors,” he said. Caplan has fond memories of growing up in a friendly neighborhood filled with people of different backgrounds who came to the city in search of opportunities: a print shop owner, a grocer, a white collar worker.

He decided to start a food tour business called Taste of New Haven to “bring positive light to New Haven when there were so many bad stories coming out,” he said.

As Caplan takes visitors through the streets, he unveils a town not only filled with culinary thrills but also history and culture, exploring neighborhoods like Wooster Square, an old Italian enclave, and Ninth Square, a historic district.

Along the way insightful tidbits about the city are revealed. For example, New Haven is the first planned city in the United States (in 1638, for a nine-block grid). It was where the first telephone conversation was tested. It was also home to the original site of the Culinary Institute of America, founded by two women who wanted to help returning World War II veterans find jobs in the restaurant industry. On College Street, the Shubert Theater debuted “The Sound of Music” and “A Streetcar Named Desire,” starring a young Marlon Brando.

Being the home of Yale University also means the city possesses some prized cultural institutions. Yale University Art Gallery’s collection contains as much breadth as a world-class museum like The Met, but its more manageable size allows visitors to peruse it in an afternoon.

A permanent exhibit with artifacts from Dura-Europos: Excavating Antiquity, an ancient Middle Eastern city where different religions peacefully co-existed, and another on ancient Andean textiles, on show until Sept. 18, are exceptional treasures.

Right across the street is the Yale Center for British Art, with a vast collection of paintings and sculptures beginning from the medieval period, housed in an airy space. Several of landscape painter J.M.W. Turner’s masterpieces are displayed in an eye-opening exhibit that traces how British artwork evolved along with tumultuous events in the empire’s history.

If you’re more of a science geek, the Yale Peabody Museum of Natural History will impress with its dinosaur exhibit, complete with the biggest dinosaur mural in the world and original fossils that several dinosaur species were named after. This year, the museum celebrates its 150th anniversary with an exhibit highlighting the finds Yale researchers brought back from their historical expeditions.

Frank Pepe’s is the originator of New Haven-style pizza, or “apizza” (pronounced “a-beets”) as locals call it: pizza with a paper-thin crust—beautifully charred, super crunchy—and sold by the pie. In the early 20th century, immigrants from southern Italy settled in New Haven for manufacturing jobs. Some opened up bakeries and began selling flattened dough with tomato sauce for take-out. In 1925, Frank Pepe, an immigrant from Maiori, on the Amalfi coast of Italy, was among the first to open a spot dedicated to pizza with sit-down tables.

Gary Bimonte, Pepe’s grandson and the fourth generation owner of the pizzeria, says the historic coal-fired oven gives the pies their unique char and flavor. The white clam pizza, with freshly shucked Long Island Sound clams and generous amounts of garlic and oregano, is a must-try. If you on Caplan’s tour, you’ll get to go behind the counter and watch the pizza-making process.

America has a German immigrant, Louis Lassen, to thank for inventing the hamburger. Lassen slapped a patty between two slices of toast for a customer on the go, and the rest is history. Louis Lunch is an old-school joint (established in 1895) that doesn’t mess around. To give you the unadulterated taste of the patty—cooked in vertical cast-iron grills that have been in use since the 1890s—the shop won’t serve you ketchup or mustard. Get “the works” (melted cheese, tomatoes, and onions) and you’ll be rewarded with one of the best burgers you’ll ever have.

Among the new-school pizza shops, Bar stands out for its utterly different approach. The pies are baked in a gas-fired oven for soft, pliable, and saucy pies perfect for its wide variety of toppings. The signature mashed potato and bacon toppings are unexpected but satisfying in every way; get this combo on a white pie with parmesan and garlic. Bar also has a selection of housebrewed beers to wash down the pizza.

Elm City Social brings American comfort food dishes up a notch, with flavor bombs like Farm Bird Lollipops, with a Sriracha buffalo sauce that will give your lips a numbing buzz; buttery Elm City Street Corn with roasted garlic aioli, Parmesan, and smoked paprika; and Chicken and Waffles with a thinly breaded cutlet, whipped whiskey butter, and sweet blackberry jam to cut through the savory richness.

Heirloom, located inside The Study Hotel, does farm-to-table with finesse. Start off with the Warm Local Ricotta, blended with funky, aromatic truffle and thyme. You’ll want to smear the ricotta all over pieces of toast. Entrees like the Pan-Seared Striped Bass celebrate vegetables alongside the protein. The dish includes flavorful microgreens, tender summer squashes, and a corn-oregano puree resembling Southeast Asian curry.

Owner and chef Claire Criscuolo has been serving wholesome, flavorful vegetarian fare at her restaurant since 1975. Her passion for feeding people healthy food has fueled a menu filled with organic vegetables and whole wheat breads. The Seasonal Goodness sandwich, for example, leaves you feeling virtuous and satiated with sauteed greens, pesto ricotta, poached egg, and mozzarella on a whole wheat English muffin.

The Study at Yale Hotel

The Study is modern and chic, with an overtly studious vibe: the logo is a pair of glasses, the lobby features a filled bookcase, and the bellboys are dressed in a Yale baseball cap and polo T-shirt.

The Omni offers panoramic views of the city from its 19th floor, which also houses a restaurant serving New England-style fare, John Davenport’s.