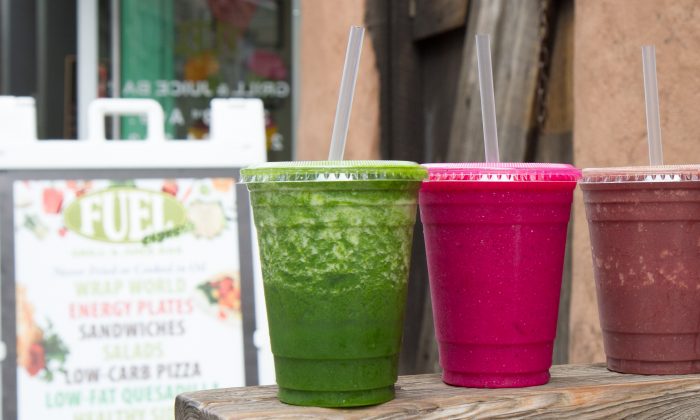 Fuel for the Body, a Healthy Alternative to Fast Food

NEW YORK—Rick Gursoy was 12 years old when he became the family chef.

“Most of the time when my dad was working I was home cooking, not just for myself, but for everyone,” he said.

Gursoy grew up concerned with the nutrients his dad and younger brother were taking in. He cooked with olive oil instead of butter; he used honey instead of sugar; he prepared whole wheat pasta instead of regular pasta.

“I have always enjoyed reading about nutrition and cooking, ever since I was very young.”

Despite the responsibilities he assumed at an early age, Gursoy said he never felt bitterness.

“I loved cooking. That was my forte,” he said. “Everyone in my household eats healthy, and it was because of me.”

Gursoy’s roots in cooking and his extensive background in physical fitness and nutrition were a powerful foundation in the creation of Fuel Grill and Juice Bar. Gursoy, now 40, opened the first Fuel in Brooklyn in 1999.

Fuel consists of 8 eateries that might just be the solution to the dilemma: Do I eat healthily or inexpensively?

The two are rarely synonymous. But Fuel’s series of healthy grab-and-go restaurants make for an expedited and tasty breakfast, lunch, or dinner.

Boasting 88 menu items, Fuel serves an astonishing array of healthy wraps and salads, low-carb meals, as well as a reliably solid juice bar, a unique smoothie selection, and protein shakes. Only a handful of items are priced over $10.

Among Fuel’s array of smoothies, the newest treasures are the acai, the pitaya, and the kale smoothies—all of which were inspired by Gursoy’s time spent in South America.

“I did a lot of research to come up with these ideas,” he said. Gursoy traveled to Brazil to research the acai berry, which are only found in the Amazon rainforest. He visited farms to learn about how they harvest and use acai berries.

During his travels he met people who live on the acai berry as their main source of nutrition and strength, particularly in the world of Brazilian Jiu-Jitsu.

“When people are training for MMA [Mixed Martial Arts] this is pretty much what they eat,” he said. “For breakfast, lunch, and dinner they eat acai.”

Gursoy knows a lot on this topic; he practices MMA two to three times a week.

Fuel’s acai smoothie consists of acai berry, strawberries, and a banana mixed with apple juice. The combination provides a perfect sweetness. It also provides natural energy and is high in antioxidants.

“It’s good for weight loss, and a good source for vitamins too,” Gursoy said. He imports his acai berries from Brazil.

His inspiration for the pitaya smoothie came after he learned how locals in Venezuela grow pitayas (or dragon fruit).

It’s ideal for those with a guilty sweet tooth—it tastes the sweetest of the three special smoothies but is low in sugar and high in fiber. Fuel’s version blends oranges, pitaya, bananas, and strawberries for a most unique experience.

Last, but definitely not least, the third of Fuel’s specialized smoothies is the the superfood kale smoothie. It is made of an elaborate and interesting mix of kale, pineapple, spinach, and mango juice.

It’s not sweet at all. It captures the juiciness of spinach, while the pineapple and mango juice is a nice balance that takes away the bitterness of spinach. The kale smoothie leaves you with a lighter feeling than most smoothies. It’s the perfect nutritional summer drink.

Gursoy also sells other juices and smoothies such as “Totally Tropical,” which consists of oranges, strawberries, and a banana, mixed with soy milk and honey; and “Summer Slam,” which is made from banana, strawberries, lemon juice, and honey.

For the regular menu, ingredients are never microwaved. Nothing is fried. White rice is not tolerated. Nor is sugar. And only olive oil is used for cooking.

“From A to Z, everything is made in-house by my chefs,” Gursoy said. Fuel doesn’t serve food as briskly as fast-food restaurants, due to the commitment to quality. But the ever-so-slightly longer wait adds sweetness to the taste.

The menu is eclectic healthy fare. It is friendly to both adventurous and conservative eaters, as well as people with special diets. There are multiple dishes with only meat, vegetables, grains, and seeds for Atkins Diet and Paleo Diet folk.

Fuel’s chicken teriyaki wrap comes in a wheat flour tortilla, cut in half, popping with veggies: broccoli, carrots, and cauliflower. And of course there is the chicken, lightly glazed in a homemade teriyaki sauce surrounded by an army of rice. The first bite delivers an interesting experience: the rice, veggies, and chicken are all embroiled in a battle for centerstage. One mouthful exudes juicy teriyaki glazed grilled chicken, the next bite a myriad of cooked veggies, and the next, brown rice covered in sweet flavors.

The Shepherd’s Salad, is a medley of chopped cucumber, tomatoes, red onions, and parsley all basked in extra virgin olive oil ($7). The Veggie Burger fuses carrots, corn, red and green peppers, green beans, peas, onions, lettuce, and tomato into an enjoyable endeavor for the palate ($7).

Organic ostrich and bison meat are on the menu for the unconventional. They are a lean source of protein, compared to the fatter protein of chicken.

“Ostrich is a bird, but it is a red meat,” Gursoy said. “Not a lot of people try it, but for people who are into different types of meat, they love it.”

The Lean Bison Wrap is filled with lean ground bison tossed with grilled onions, peppers, brown rice, and a choice of hot or tahini sauce ($8.75).

“Anybody that is into body-building and fitness loves bison meat for the amino acids,” said Gursoy.