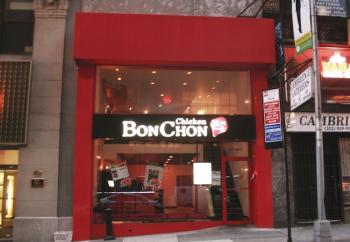 Ellen Wang
View profile
Follow
biggersmaller
Print
Fried chicken may be the most popular food after french fries and hamburgers in the United States. No matter where you drive to, you always see Roy Rogers, Kentucky, or Fry Chicken off the road.

I am also a big fan of fried chicken, but I became a bigger fan of it when I came across a Korean fried chicken restaurant known as BonChon Chicken, located on 38th Street between Seventh and Eighth Avenues.

Different from the plain American fried chicken, the Korean fried came with juicier meat, an extra layer of thin crispy coating similar to that on a roasted Peking duck, and a homemade garlic soy sauce. I particularly loved the sauce as the hint of garlic made the taste just right.

In addition to making good fried chickens, the two-story restaurant features bars that provide alcohol from all around the globe, including quality wine and Japanese Sake.

Although rare in the United States, the restaurant chain is well known in its home country, Korea.

Seo Jinduk, owner of the Manhattan branch and founder of the chain, has studied and experimented with making chicken since he joined the food industry in 1993. His goal was to make chicken attractive to children and adults alike, and he says he succeeded. I for one can say he succeeded, at least on the side of the adults.

The first BonChon restaurant opened in 2002 in Pusan, Korea.