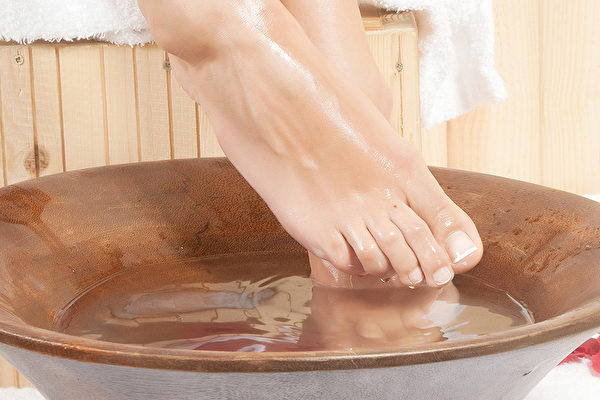 Since ancient times, foot baths have been widely used in Chinese medicine for for nourishing the body and treat diseases. Recent medical studies in Korea have proved that foot baths are effective for relieving pain, treating depression, menopausal syndrome, and even diseases. (Shutterstock)
Health

Since ancient times, Chinese health practitioners have relied on simple hot foot baths as an effective remedy for nourishing the body and treating diseases. Recent medical studies have proved that foot baths are effective for relieving pain, treating depression, menopausal syndromes, and other diseases.

Hua Tuo (c. 140–208), a famous Chinese doctor from the late Eastern Han dynasty, authored a book on the importance of the feet titled, “The Way of the Soles of the Feet.” He compared our feet to the roots of a tree and said, “A tree’s roots are dried up before it withers, and a man’s feet age first before he grows old.”

Hua suggested foot baths were essential to care for your feet all year long, but the effects were different depending on the season. “Foot bath in spring enhances yang energy and prevents sagging of internal organs; foot bath in summer dispels summer dampness; foot bath in autumn moistens lung and intestines; foot bath in winter warms the Dan Tian.”

Hua insisted foot baths are beneficial to the body even during the hot summer months. The heat and dampness of summer can cause people to lose appetite and energy, become sleepy, and even irritable. A foot bath helps remove the dampness and lifts people’s spirits, so they eat and sleep more normally.

Su Dongpo, the ancient Chinese literary giant, also believed in the health benefits of soaking feet. He suggested regular foot baths were more beneficial to the body than taking Chinese medicines. He said: “The effect of a hot foot bath is not very obvious at first, but accumulated for more than a hundred days, the function is immeasurable. Compared with taking medicine, its effect is a hundred times better.”

Another famous fan of foot baths was Emperor Qianlong, the longest-lived emperor in Chinese history. He referred to the foot bath as a pot of soup and said this was his daily regimen, “300 steps in the morning and a pot of soup in the evening.”

In modern science, principles of reflexology affirm our feet have reflex zones that correspond with our internal organs. Soaking feet in warm water stimulates those reflex zones to promote blood circulation, regulate the endocrine system, and improve the functioning of organs. Foot baths truly offer an effective remedy in the treatment and prevention of diseases.

Chinese medicine practitioners also rely on foot baths for external therapies. By adding various herbs to the hot water, foot baths have proven effective in relieving pains in the back, legs, shoulder, and neck. This is also an effective therapy for treating diseases associated with the nervous system and gynecology.

In September 2020, the Journal of Naturopathy of the Korean Society of Natural Healing published a study. The study examined the effects of foot bath therapy to treat menopausal symptoms and sleep loss. The subjects included 10 women in their 50s. Each was experiencing menopausal syndrome that included facial flushing, heart discomfort, sleep problems, anxiety, and physical and mental fatigue. After soaking their feet three times a week for 12 weeks, their menopausal syndrome scores (MRS) dropped from an average of 3.53 points to 1.54 points after the study.

In January of 2021, the Journal of the Korean Maternal and Child Health Association published a study from the Koryo University medical school. This study also examined the benefits of foot soaking. The study involved 23 single-parent women who struggled with depression and body pains. After taking a foot bath every day for four days, their average depression score dropped from 9.39 to 5.35 points. The average body pain score (VAS) also dropped from 5.39 to 3.96 points.

The Journal of Korean Clinical Nursing Research has also reported (pdf) how foot baths are effective in improving edema in the lower extremities, stress, and fatigue. The study involved 50 nurses who worked in the operating room of a university hospital. Half of the group were control subjects who did not soak their feet. The experimental half soaked their feet as instructed. Within a 3-week test period, they soaked their feet up to the ankle in 104° Fahrenheit water for 20 minutes at least 12 times.

The recommended foot bath procedure is easy. Simply soak your feet in water heated to above the temperature of your body, around 100 to 109 degrees Fahrenheit. The water’s depth should at least cover the ankle and could go up to the lower part of the calf. Continue soaking for 20 to 30 minutes. To ensure improved health and healing, you must perform the procedure consistently over a period of days or weeks.

The optimum time for a foot bath is one hour after a meal. You can expect slight sweating to occur. Foot baths are not for infants or young children. Diabetic patients and pregnant and menstruating women should exercise caution or speak with their physician.

Other suggestions include adding white vinegar to promote blood circulation, ginger to disperse chilliness, salt to help with sleep and fight against aging, and aromatic spices to make the experience more pleasurable.

Lisa Bian
Follow
Lisa Bian is a Korea-based writer for The Epoch Times focusing on Korean society, its culture, and international relations.
SHARE
Friends Read FreeCopyFacebookTweet
You May Also Like