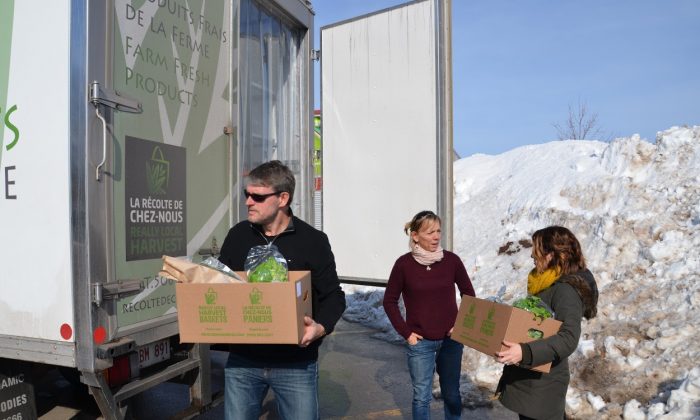 The humble life of the average tomato reveals how broken our food system is.

The tomato starts out in Mexico, picked green and unripe by an underpaid farm worker then sprayed with chemicals to help it endure the long journey ahead while artificially “ripening.”

The first leg of the journey is a 2,500-kilometre trip by truck to California where the tomatoes are sorted, boxed and stickered. Then they are jostled into another truck destined for Canadian grocery stores, arriving a few thousand kilometres later still hard and mostly tasteless.

Meanwhile, a perfectly ripe, sun-warmed red tomato is waiting at your local farmer’s market, where the vendor, smiling and friendly, conceals the chronic stress of a life at the edge of bankruptcy.

In the last few decades, farming and food production in North America has transformed, with industrialization and new technologies allowing large corporate farms to devour ever more of the market share—making it difficult for small and medium sized farms to survive.

But the rapid shift to industrial farming has introduced a new set of 21st-century food problems—products are shipped across ever longer distances, losing nutrition and gobbling fossil fuels in the process. Poor labour and environmental standards, lack of animal rights, and widespread use of pesticides and GMOs on these farms are often cause for concern.

In Canada, access to sufficient, healthy food is either stagnating or getting worse, according to a recent report from the University of Toronto.

But foodies, farmers, non-profits, and activists are now growing a solution to these problems through “food hubs”—which help small and midsize farms to get their products to a wider regional consumer base.

Sometimes called “the Craigslist of food,” food hubs come in many forms, but most often it’s a business or organization that gathers, distributes, or markets locally grown produce or other farm fare.

Some are co-op-run websites that allow farmers to sell directly to their members. Others are food box programs that gather goods from many local farms and deliver them to households. Non-profit food hubs can play matchmaker between local producers and wholesale customers like schools and hospitals. The varieties are endless.

Each model is unique because they work to address needs specific to their community. What all hubs have in common is their mission to support farmers, make fresh local food available to larger markets, and strengthen local economies while shortening the distance food travels from farm to plate.

The ever-growing global movement to “eat local” and “choose organic” food is driving a new wave of interest and investment in food hubs. This renewed demand could be turning the tide in modern agriculture—one local tomato at a time.

Co-op members can now order from local farmers with a few clicks of the mouse, while other members deliver it, creating a distribution system that few small farms can manage on their own.

“We’re facilitating that direct connection between local producers and consumers,” he says.

Eisen knew there was a serious gap in the market when he discovered a survey that revealed over 80 percent of local farmers would like a central hub to help them distribute their food. Farmers also reported a lack of infrastructure to deal with issues of storage, marketing, and direct access to wholesale customers—things that the local farmers markets could not provide.

Eisen sees local food systems (or relying on locally produced food as much as possible) as the sustainable choice, but also one that makes the most financial sense. Research tends to agree. One US-based study by the National Cooperative Grocers Association revealed that for every $1,000 a shopper spends at their local food co-op, $1,604 is generated in the local economy—$239 more than if they had purchased at a grocery store.

The potential of food hubs is not only monetary, but found in the wider “values network” they bring to their communities, says Alison Blay-Palmer, an associate professor and the founding director of the Centre for Sustainable Food Systems at Wilfrid Laurier University.

Blay-Palmer says that aside from the obvious benefits of eating healthy food that tastes good, the natural community focus of food hubs can help address social issues, for example, by getting low income and marginalized communities access to nutritious food.

The Ontario-based food hub Karma Project, which donates fresh produce to local women’s shelters and operates a “pay what you wish” café for people of all income levels, is one of many examples.

Spiralling food-related epidemics like diabetes and obesity could also be abated by better access to fresh food. This is a motivator for FoodShare Toronto, a food hub that offers programs in nutrition, school lunches, workshops, markets, and food boxes to 155,000 children and adults in the city. The school program also spreads growing know-how to future generations by having kids manage and cultivate an urban market garden.

“I think that people are starting to understand that eating healthier food and supporting local farmers is one thing that they can do in a world that they don’t have a lot of control over,” she says, adding that food hubs in Canada are developing “in leaps and bounds.”

As recently as the World War II era some provinces in Canada were growing most of their own fruits and vegetables, and had the processing facilities to feed populations year-round. But as the food system shifted ever globally, much of this infrastructure was lost.

“It’s a question of, in some ways, putting back what we had in terms of processing capacities, and it’s also a question of thinking about food in a different way for the consumer,” says Blay-Palmer.

“We know, for example, there are huge droughts in California, so what does that mean for the Canadian food supply in terms of getting access to fresh food on an annual basis? So what are the potentials for doing things in a different way?”

People who could benefit most from better self-sufficiency are those in Canada’s remote northern regions, where high transport costs mean they pay anywhere from 20 to 287 percent more than the rest of Canada—$15 for a bag of apples, or $20 for a head of cabbage.

One feasibility study is now looking at distributing nutritious food and goods from Ontario’s Sioux Lookout Airport, a hub that could serve up to 31 remote, fly-in communities.

But food insecurity is not only a problem for the geographically isolated. Food hubs are also popping up in places like Detroit, where urbanites suffer from “food deserts”—a geographic area where affordable, nutritious food is difficult to obtain without a vehicle.

Over half a million Detroit residents live in neighborhoods where they must travel twice as far to reach a grocery store than a convenience store. As a result, many families are buying their meals at corner stores, where microwavable meals and fast food are well stocked, but healthy foods are sparse.

Food hubs are helping producers of all sizes grow, which in turn supports the economic health and well-being of rural communities.
— US Rural Development Deputy Under Secretary Doug O'Brien

Enter Eastern Market, a mammoth public market and food hub that aims to alleviate Detroit’s food problems. The six-block bazaar features hundreds of vendors who sell everything from farm fresh eggs to homemade jams, but it’s more than a typical farmers market.

Many vendors accept food stamps and some offer nutrition and cooking lessons. A special day is reserved for wholesale customers to shop and many distribute food to nearby neighbourhoods and schools. Commercial kitchen space is available where small-scale food producers can test their recipes for a larger market. Everything in the system is geared toward long-term food solutions.

Thriving food hub operations in the U.S. have a major competitive advantage over Canada however: they have a lot more government support.

The U.S. Department of Agriculture has funded over 150 food hub projects in recent years, and set up several grants and programs to support new hubs. This has bolstered a 65 percent increase in food hubs since 2009, with over 230 hubs now active across the country.

“Food hubs are helping producers of all sizes grow, which in turn supports the economic health and well-being of rural communities,” Rural Development Deputy Under Secretary Doug O’Brien said in a press release. “We know they help build stronger regional food systems.”

Though the number of food hubs in Canada is not known, their development is lagging behind the US because funding is more likely to funnel to multinational food companies than family farms, says Blay-Palmer.