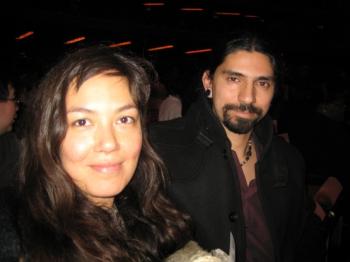 “I just love the classical feeling of the culture,” said folk singer and musician Tina Malia, after the evening show.

“It's rare to find it these days,” she said of the feeling she got from the performance.

Ms. Malia enjoyed the finale The Buddha's Teachings Spread Far and Wide and another dance Tibetan Dance of Praise. “I loved that they brought the Tibetan culture into the show, I love that they represented that,” she said.

Dressed in the garb of traditional Tibetan nobility, young men and women share their joy of life in the snowy mountains. Dance in Tibet-harmonious in form and energy-is as much a part of daily life as herding, hunting, or devotional prayers, states the program.

“I love the focus on the divine and the focus on positivity in all of the music and all the dance,” she continued.

With reporting by Can Sun.