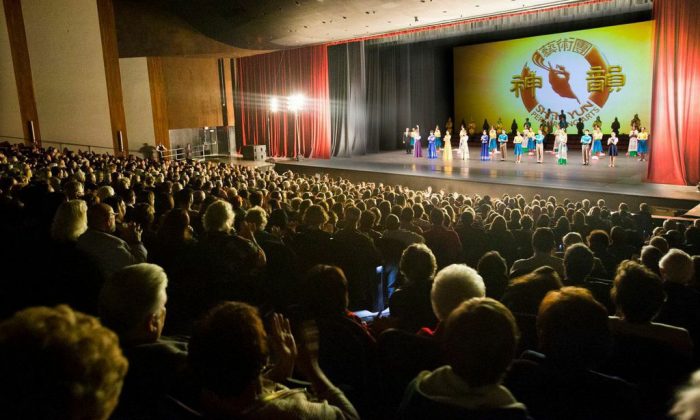 BAKERSFIELD, Calif.—”I liked everything about it. I’ve never seen anything like that before, and I really enjoyed it,” said Mike Melvill, the world’s first commercial astronaut, after attending Shen Yun Performing Arts at the Rabobank Theater on Friday, Feb. 27.

“It was fabulous,” she said. “I loved the dancing.”

Shen Yun is a New-York-based non-profit music and dance company dedicated to reviving 5,000 years of the true, divinely-inspired culture of China and sharing it with the world, according to the official website. The company creates an all-new production ever year.

“Sophisticated dance techniques, an orchestra joining instruments from both the East and West, beautiful costumes, and a stunning backdrop—this is Shen Yun at first glance. But digging deeper, one discovers a sea of traditional Chinese culture,” states the website.

“Mortals and divine beings merge on stage as one. Principles such as benevolence and justice, propriety and wisdom, respect for the heavens, and divine retribution, all come to life, washing over the audience.”

Mr. Melvill was the first person to fly a privately developed spacecraft beyond the atmosphere and the first person awarded commercial astronaut wings. He has flown nine first flights of aerospace engineer Burt Rutan’s aircraft designs, including SpaceShipOne.

With such an advanced technical background, Mr. Melvill noticed all the details of the Shen Yun performance.

He also enjoyed the technology used in the animated background projections, which brings the audience into the story and allows the dancers to appear to do superhuman feats straight out of Chinese legends, such as fly into the air.

“I thought that was absolutely fabulous,” he said.

“I just enjoyed the whole thing,” she said. “It was wonderful.”

Mrs. Melvill noticed all the dancers looked “extremely enthusiastic,” as though they were exactly where they wanted to be and were enjoying themselves.

Mr. Melvill was fascinated by the grace of the dancers as they moved across the stage.

“They don’t appear to walk,” he said. “Their heads don’t even move … I’ve never seen anything like it.”

Mrs. Melvill also appreciated the inclusion of a couple of dance numbers about modern-day China and life under communist rule.

“I love the message that they’re giving,” she said. “I think that that’s really special … Life is not completely fair in China.”

A Shen Yun performance also includes vocal and instrumental soloists, and Mr. and Mrs. Melvill were amazed at the power of the soprano singers, who performed with no microphones.

“I couldn’t believe the notes they could get,” said Mr. Melvill. “The power of their singing … How could they project so much sound?”

Ms. LeFebvre said that although she doesn’t understand Chinese, she didn’t even need to read the English lyrics projected onto the background to understand the meaning of the vocalists’ songs.

One of the most memorable Shen Yun performances for many audience members is the two-stringed Chinese violin called the erhu. An instrument with a history of 4,000 years, it has an extremely expressive and stirring sound.

“That was absolutely incredible,” said Mr. Melvill. “The sound was so unique. I’ve never heard anything like that.”

“She didn’t look at the instrument at all as she played,” noticed Ms. LeFebvre. “She felt it all the way through. It was amazing.”

All three “absolutely” recommended Shen Yun to others.