Are You a Teacup Parent?
0 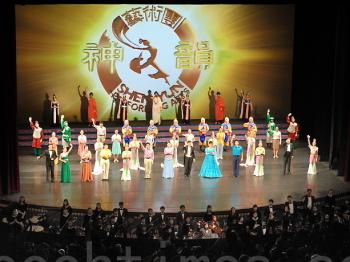 The audience, in Taipei, gave enthusiastic applause to the artists during a curtain-call. (Song Bilong/The Epoch Times)
Arts & Culture

By Epoch Times Staff
Print
TAIPEI, Taiwan—Shen Yun Performing Arts International Company concluded its final show in Taipei on April 3. Many people from the business community came to enjoy the spectacular performance. Among them were a group of employees from Grandtag Financial Consultancy & Insurance Brokers Ltd. Dressed in splendid attire, Ms. Liu Meihua, a regional manager of the company, highly praised the show, saying, “The Shen Yun performance allows Taiwanese to recognize the finest elements of Chinese culture.”

Ms. Liu purposely purchased tickets in the front row. “The show is truly worth viewing. A performance like this is wonderful,” she said excitedly. “The body movements of the dancers are extremely graceful and the overall structure is well-planned and nicely presented. The music accompaniment coordinates perfectly with the performance on stage. The show is extraordinarily beautiful and exquisite!” Ms. Liu’s did not hold back in her praise of Shen Yun.

She noticed that Shen Yun programs had been carefully chosen and arranged. Even though the show lasts just two short hours, it encompasses the very quintessence of the 5,000-year Chinese culture. “Ranging from the creation of the world to the various dynasties, Shen Yun picks the quintessence of every dynasty and puts it on the stage. How brilliant this is!”

Ms. Liu said she has been concerned about the gradual decline of traditional Chinese culture in Taiwan, and other cultures around the world. She considers Shen Yun’s endeavor to spread the beautiful essence of Chinese culture through dance and music has exceptional significance to Taiwanese. “I will share my experience of watching the show with my friends because this is linked to the preservation of the 5,000-year long Chinese culture,” she said.

With reporting by Song Yanni.