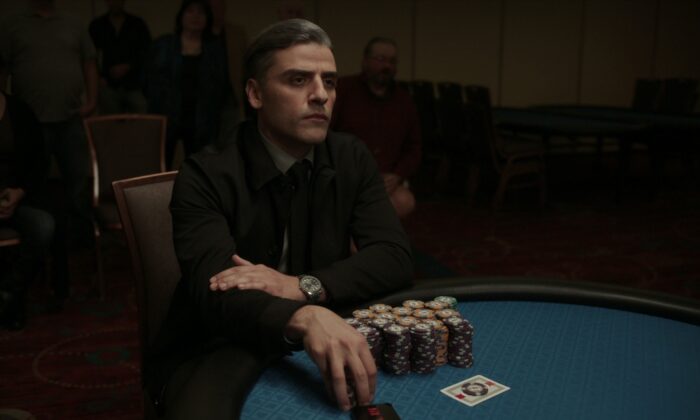 Film Review: ‘The Card Counter’: Yet Another Redemption Yarn From Paul Schrader

Love him or hate him (and there are few people on the fence), you’ve got to give filmmaker Paul Schrader credit for one thing: He’s consistent. He’s consistent in that he uses the same blueprint for most of his movies, something that some might deem as lazy and repetitive.

When regulated to providing just the screenplay (“Taxi Driver,” “Raging Bull,” “Bringing Out the Dead”—all directed by Martin Scorsese), Schrader’s antihero-seeking-redemption motif is not so much easier to take but livelier.

When unchecked and directing his own material (“Hardcore,” “Light Sleeper,” “Affliction,” “Forever Mine,” “First Reformed”), Schrader’s films are visually stylish but narratively inert and relentlessly grim.

Oscar Isaac stars as William Tell, an Iraq War veteran and convicted felon, who spent his years in the can learning how to count cards. A talented poker player, Tell (probably not his given last name) is a master of blackjack and knows that keeping a low profile and winning just enough to get by will not raise the ire of casino watchdogs.

Literally living out of a suitcase, the nomadic Tell travels from city to city while staying in second-tier motels and avoiding his fellow man. When not clad in full black at the casinos, Tell stays in his room, which he augments by removing all electronic devices and artwork and covering everything in light gray bedsheets. Why Tell does this is never hinted at or explained. He doesn’t appear to have OCD and is not a germaphobe.

While in the rooms, he faces walls writing in a journal while sipping high-end whiskey. It almost certainly is Schrader suggesting some sort of spiritual symbolism, but it is vague, oblique, and borderline condescending to the audience.

Haddish Is Out of Her League

Tell’s tedious routine gets a jolt when he reconnects with La Linda (Tiffany Haddish), a woman who recruits professional gamblers for wealthy backers who wish to remain anonymous. The problem, at least initially, is that Tell actually prefers routine and not having to answer to anybody.

Unlike many comedic performers and former stand-up comics who’ve made successful transitions to drama, Haddish fails miserably. She cannot present Schrader’s ultraheavy dialogue convincingly and is woefully miscast. Her lackluster turn is made all the worse by her appearing opposite the acting powerhouse Isaac.

In what is arguably the most contrived and forced passage in the film, Tell takes a break from the gambling tables to take in a sparsely attended law enforcement lecture, hosted by John Gordo (Schrader regular Willem Dafoe), a “security expert” Tell knew in Iraq. Given the gravity of what’s presented in flashback sequences taking place at Abu Ghraib prison, it is impossible to believe that Gordo would not recognize Tell, who is sitting mere feet away and making lingering eye contact.

At this same lecture, Tell is approached by Cirk (that’s “Kirk” with a “C”) (Tye Sheridan), the son of another man who knew Gordo in Iraq. With information that only a cop or stalker might know, Cirk reminds Tell that Gordo is an enemy to both of them and that they should kill him.

Having spent years trying to leave his iffy past behind, Tell takes Cirk under his wing in an attempt to divert his mind away from homicide.

Isaac Must Carry the Film Alone

Like far too many child actors before him, Sheridan (“The Tree of Life,” “Mud,” “Joe”) has had difficulty tackling adult roles. Apart from his stint as the younger Cyclops in the “X-Men” franchise, every role Sheridan has turned in since 2014 has been a bust. Looking alternately bored or confused the entire time, Cirk lacks anything resembling the required passion, rage, or anger of a guy bent on committing murder.

With Dafoe appearing on screen for less than 15 minutes and Haddish and Sheridan contributing next to nothing, Isaac is left with carrying the entire movie on his own, and he more than handles the challenge. A minimalist performer, Isaac’s dark eyes and exacting baritone often hide (in a good way) his smoldering intensity. He’s a perfect leading man for mysterious and calculating characters such as this, and Schrader would be wise to cast him again if at all possible.

Having preached to the same fervent but modest choir for nearly a half century, Schrader widened his audience somewhat with “First Reformed” (which netted him his only career Academy Award nomination). And he could have continued that momentum with “The Card Counter,” but his questionable decisions regarding cast and plot resulted in a movie that could have been great but in the end is just average and largely forgettable.

As self-directed Schrader films go, “The Card Counter” borders on the hopeful and ends on a note that delivers redemption and good conquering evil, albeit in a highly bittersweet manner.