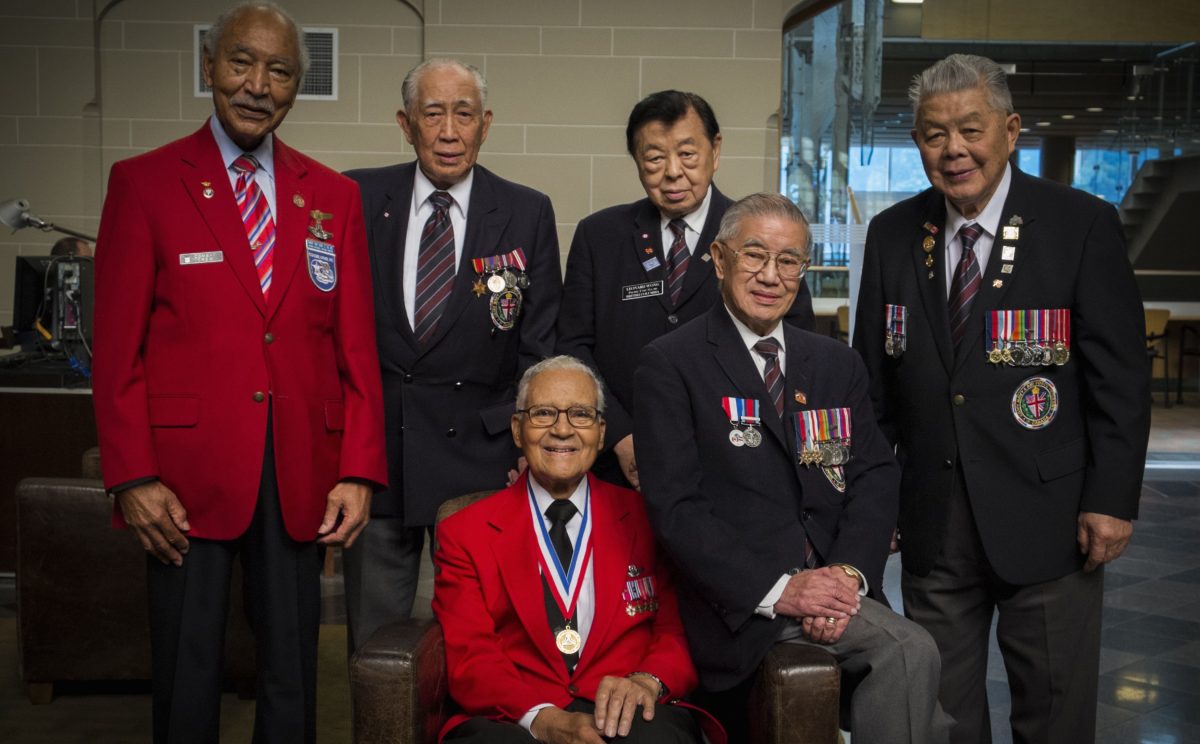 Fighting for a Country That Doesn’t Want You

Chinese-Canadians’ determination to serve in the Second World War was nothing short of remarkable given the situation they faced at the time. But they persevered due to their strong patriotism for Canada, and came home to win the rights they had been denied for so long.

After Canada entered World War II, a debate raged in the Chinese community as to whether joining up to go fight was the right thing to do given the racial policies in place at the time.

Even Chinese-Canadians born here were not recognized as citizens—they had no right to vote and were banned from entering the professions—and the infamous Chinese Exclusion Act with its punitive head tax was in full force.

There were two sides to the debate. One view was that volunteering for military service would prove Chinese-Canadians’ loyalty to Canada and win them the right to citizenship, while the other was a reluctance to fight for a country that denied them equal rights.

Victoria-born Douglas Jung was in the first camp. In the documentary “I am the Canadian Delegate,” Jung says he knew it was imperative to join up if Chinese-Canadians were to gain legal status down the road.

“Some of us realized that unless we volunteered to serve Canada in its hour of need, we would be in a very difficult position to demand our rights as citizens because the Canadian government could say to us, ‘What did you do during the war? When everybody else was off fighting for Canada, what did you do?'”

But some who tried to enlist were not accepted, and the situation was similar for the First World War, when some Chinese-Canadians were turned away from recruiting stations—particularly in British Columbia, where racism against Chinese was widespread.

“In B.C. especially it was very anti-Asian, but some of those who lived further away or over in Alberta—they were able to join up,” says King Wan, president of the Chinese Canadian Military Museum Association.

Some of us realized that unless we volunteered to serve Canada in its hour of need, we would be in a very difficult position to demand our rights as citizens.
— WWII veteran Douglas Jung

B.C. in particular—which had the highest number of Chinese immigrants in the country—feared that if Chinese-Canadians did go fight, they would demand to the right to vote after the war.

“It’s very sad how some people in government were thinking,” Wan says.

It was only after Japan entered the war that Chinese-Canadians could freely enlist—and that came about at the behest of the British War Office.

“They wanted to have Asian-speaking look-alikes over there to fight the Japanese because the Chinese can assimilate into the population without too much difficulty. So the British government pressured the Canadian government to allow them to join,” says Wan.

Approximately 700 Chinese-Canadians served in the Second World War, including Douglas Jung and his brothers Ross and Arthur. As part of the Special Operations Executive’s (SOE) Force 136, many were recruited to infiltrate and fight behind Japanese lines in Southeast Asia and the Southwest Pacific—mostly China, Sarawak, and Malaya.

“A good number were sent over there to work with the guerillas,” says Wan. “Some teamed up with the locals and indigenous people, and one group went to work with the head-hunters and learned how to use those poison darts.”

Jung was one of 13 who volunteered for Operation Oblivion, a highly secretive Special Operations mission. They were trained by the SOE (the predecessor of MI6) at a secret location in the Okanagan.

The original plan was for the group to be parachuted into China behind enemy lines and organize resistance units against the Japanese—an extremely dangerous mission. They were each issued with a suicide pill, which was to be used in the event that they were captured.

However, the mission was cancelled before it could begin, because Gen. Douglas MacArthur wanted the South East Asia Command to be an all-American operation.

The 13 were given the option of going home, but they chose to remain and were sent to New Guinea and Borneo. Those who went to Borneo recruited local tribesmen to help liberate a Japanese prisoner of war camp. Four went on to earn the Military Medal, a relatively high honour.

“This is the highest proportion of decorations given to any Canadian military formation either before, during, or after the Second World War. So we’re very proud of that record, and all this was done, bearing in mind, at a time when we did not have to serve Canada,” Jung says in the documentary.

After the war ended, many of the Chinese-Canadians who had served became involved in another battle—fighting for the same rights as all other Canadians.

In 1947, after two years of lobbying, the veterans and their supporters triumphed: the government repealed the Exclusion Act and the first citizenship ceremony for Chinese was held in Vancouver with some 400 in attendance. All eligible Chinese-Canadians were also granted the right to vote.

Jung played a part in that fight. After the war he studied law, and in 1957 became the first Chinese-Canadian member of Parliament, and almost right away was appointed by Prime Minister John Diefenbaker to represent Canada at the United Nations as chair of the Canadian Legal Delegation.

He went on to earn numerous accolades, including Member of the Order of Canada. He died in 2002. It is widely recognized that he and other Chinese-Canadian veterans were not only instrumental in helping the Allies win the war, but their determination to serve as well as fight for their rights also helped change societal attitudes toward race in Canada.

That was borne out by Jung’s election in Vancouver Centre—the same area where in 1907 a gang of roughnecks stormed Chinatown, smashed store windows and damaged property, and threw some residents and their belongings into False Creek after tying their pigtails together.

“Fifty years later, that same constituency that perpetrated this terrible act on the Chinese community made amends by electing the first Chinese-Canadian MP,” Jung says.

He also notes his appointment by Diefenbaker as Canada’s delegate to the U.N. as an important step in ending racist attitudes toward Chinese-Canadians.

“This was a very subtle and astute gesture by Prime Minister Diefenbaker because by that one stroke he told the world that here in Canada we no longer have racial discrimination.”