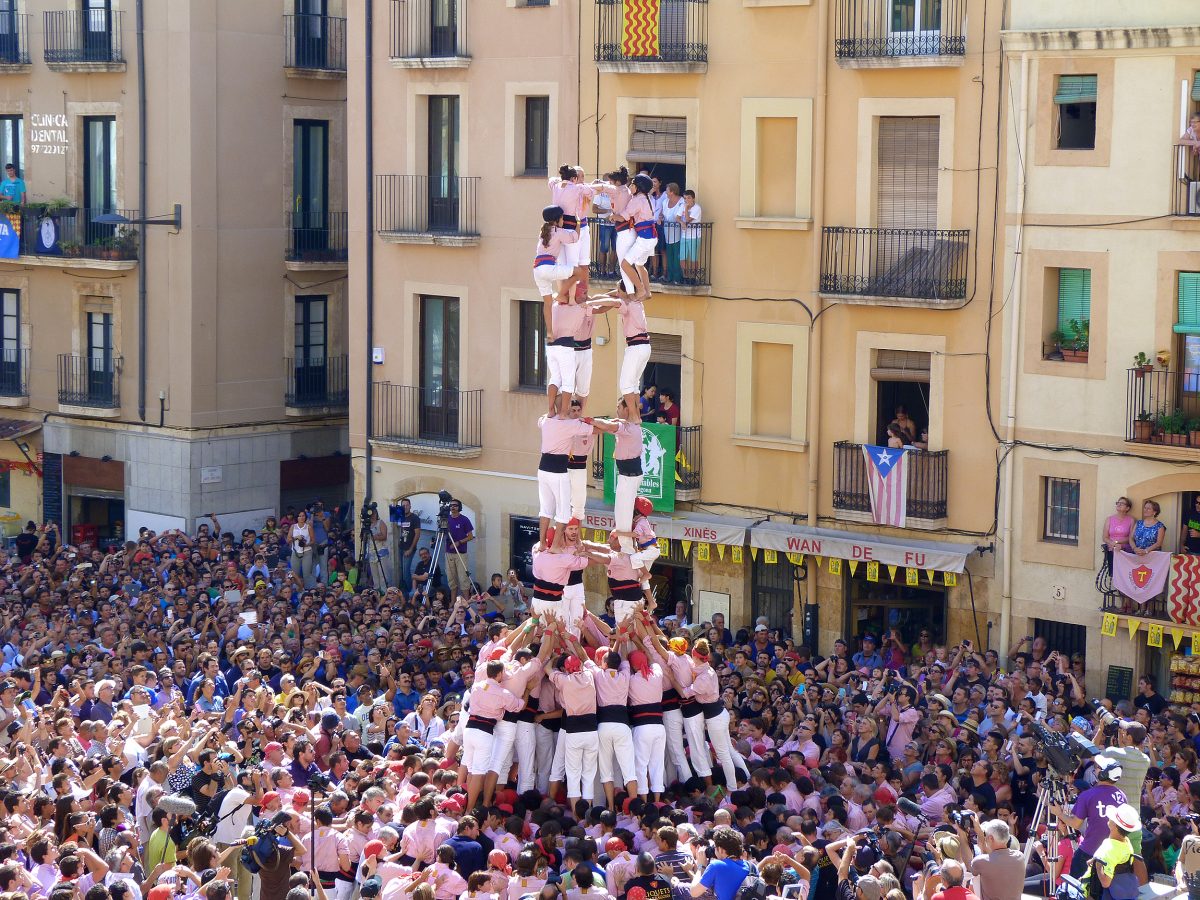 The crowd gathers to watch a human tower form at at the 10-day Santa Tecla Festival in Tarragona, Spain. The towers can reach hundreds of feet high and involve several hundred individuals. (Manos Angelakis)
Travel

Patron saint festivals, a celebratory demonstration of Catalan culture for millennia, are held each year at the autumnal equinox to welcome the fall. The Catalans treasure their unique ancient language and culture, and while their festivals were initially religious in intent—and perhaps to some they still are—they have become big block parties where the entire population takes to the streets.

My “festival fever” began in Tarragona, one of the major cities along with Barcelona included in the Catalonia autonomous region, at the 10-day Santa Tecla Festival of merrymaking. Dancing in the streets, parades of fantastic statues, marching bands, human towers, fireworks, and partying, partying, partying…

The festivities had been going on for days by the time we arrived and we enthusiastically took to the streets to seek out the musical performances for the evening. We followed the crowds down the main thoroughfare, Rambla Nova, until we came across dancing throngs at the bandstand fronting the Mediterranean Sea. The group played salsa into the wee hours of the night, plus Pasodoble, cha-cha-cha, meringue, waltz, pop, and rock tunes—all crowd pleasers and music to dance to. And dance we all did, young and old, good and not so good, filling the square with smiling, perspiring, laughing, dancing bodies.

Afterward, we moved on to the Placa De La Font where the band was playing well-known songs from famous American groups. The crowd was vibrating with energy and so tightly packed their dancing consisted of jumping up and down in place. We ended the night in anticipation of the next day’s event: the amazing human towers.

It is impossible to overly dramatize the energy, excitement, and awe that human towers inspire. Their raison d’être has been lost to time, but perhaps it was to emulate Cartoixa d’Scala Dei, the Carthusian ladder symbol based on a shepherd’s dream of angels descending from heaven on a ladder. The Carthusian Order was prominent in Catalonia for hundreds of years, but whatever the origin, groups of up to several hundred brave individuals practice all year long to compete in the Santa Tecla Festival.

A large group forms the base, over which designated people begin to climb to form a central core, usually three to five persons per circle… then another… and another. The core builds, hundreds of feet high in the predetermined configuration, until a small child, 4 to 6 years of age, climbs to the top and holds up his or her hand.

During the formation of the tower the crowd is silent, holding their collective breath, but when the child’s hand is raised that’s the sign for the crowd to roar its approval and they continue to shout and cheer until the tower is completely undone. And then another tower forms! Each group wears coloured shirts designating their club, over white trousers, and the children wear a protective cap.

Sadly we depart Taragona and it’s on to Barcelona.

Barcelona is the capital of the region of Catalonia and Spain’s second largest city. The Patron Saint of the city is Mare de Deu de la Merce (Our Lady of Mercy). The five-day celebration begins with a fire run complete with fire-spitting dragons and the parade of “The Devils.” Devil clubs dress up as devils and accompany the dragons, spraying the crowd with sparklers (hot embers).

The next day is the Parade of Giants (Gigantes). These are huge constructions that tower above the crowds and are effigies of kings, queens, nobles, dwarfs, historical and/or popular figures. A single person manoeuvres each figure from underneath, which is no easy task with the crowds, the heat, and the sheer weight.

Tens of thousands gather to join the parade through the Gothic or Old Quarter of the city, accompanied by percussion groups that wail and beat drums. Arriving at Plaça de Sant Jaume, the square in front of City Hall, the Gigantes take turns spinning around and dancing, to the delight of the crowds.

The Gigantes depart and the air becomes electric in anticipation of the Castellers, the groups that will form the human towers or castells. First one goes up, then another, and another, larger and higher than the ones before; brightly coloured shirts in a jumble of humanity until a little one holds up a hand in triumph before shimmying back down the sea of bodies.

The crowd’s cheers stop and everyone holds their breath as one of the Castellers slips, but resume once the person is caught by their base members and is seen not to be injured. The sheer intensity of the scene renders me breathless as I watch ordinary people build a stairway to heaven with their own bodies. At night, projections of the day’s events appear on the side of the buildings in the square.

Thinking nothing could top the Human Towers, we were in for still another outstanding spectacle—the closing fireworks display. On Montjuïc Hill, a lovely green space overlooking Barcelona and home to the 1929 Expo, the 1992 Olympics, museums, sports facilities, theatres, and gardens, is the spectacular Magic Fountain, a dancing, open-air water performance of music and lights. The fountain fronts the Palau Nacional (National Palace) which houses the Museu Nacional d’ Art de Catalunya (National Museum of Art of Catalonia), a neo-Baroque building which is strategically lit at night to full effect.

Crowds gather at the broad boulevard leading to the fountain, perhaps as many as 300,000, and at 10:00 P.M. the show begins. The lights dim, the crowd grows silent, and the music blares forth synchronized to the changing colours of the dancing waters and the fireworks exploding overhead in a massive pyro-musical extravaganza.

At one point the music stopped and the fountain was turned off as the announcer addressed the crowds, where thousands upon thousands of hand-held sparklers lit up the night sky. Then the program continued—a fitting finale to a spectacular cultural event that the Catalans gift to the world.