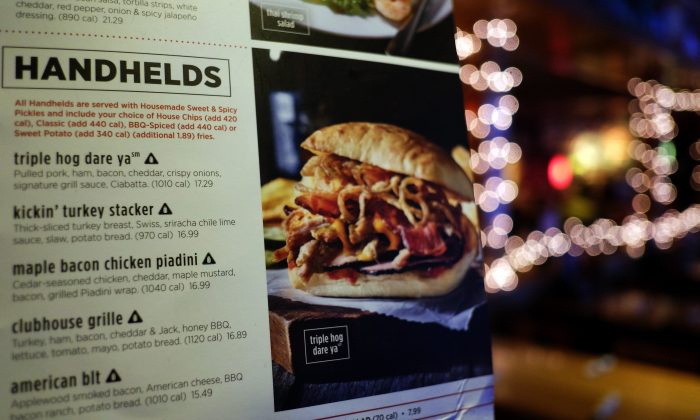 Sodium warning signs are seen next to a dish (shown as black triangle icon) on the menu at an Applebee's in New York on November 30, 2015. (JEWEL SAMAD/AFP/Getty Images)
Health News

Calorie Counts Coming to a Menu Near You, but Not as Soon as the FDA Hoped

This month, the federal Food and Drug Administration (FDA) was supposed to roll out a nationwide scheme requiring chain restaurants and other food outlets to print nutritional information on their menus. However, after intense lobbying from stakeholders in the food industry, and fierce debate regarding rule specifications and cost, implementation of the regulation has been delayed another year.

So by Dec. 1, 2016, affected food retailers, including vending machines, will have to disclose calories and other nutrition information for their menu items.

Consumers and health industry professionals have been generally supportive of the proposed rules as a way to tackle a number of pressing health issues.

A written submission to the FDA in support of the law from licensed dietician Rebekah Buzolich, is representative of many comments:

“With American adults and children consuming about one-third of their calories from eating out, menu and vending labeling will provide important tools to allow people to make informed food choices.”

However, complying with these new rules can be a lengthy, costly, and confusing ordeal for many restaurants, groceries, and other food outlets and even with the one year extension, many issues are still far from settled.

FDA said the law will apply to approximately 298,600 food establishments, organized under 2,130 chains.

The complaints are similar to the debate in New York City over new requirements for high salt warnings on menus. On Dec. 1, New York became the first U.S. city to require chain restaurants with 15 or more locations to post a salt shaker icon next to menu items with over 2,300 milligrams of sodium (about 1 teaspoon salt), which is the daily recommended amount.

The National Restaurant Association has since filed a lawsuit against New York’s Board of Health, in part arguing that the rules contain “irrational exclusions and nonsensical loopholes.”

Christin Fernandez, director of media relations for the association, said via email “while we advocated for the FDA menu labelling rule, we are still seeking clarification on certain issues.”

The nutrition labelling regulation will apply to a range of food establishments, namely chain restaurants with 20 or more locations across the United States.

The law will also apply to restaurant-like foods sold at other establishments with 20 or more locations, including takeout pizza, made-to-order sandwiches listed on menu boards at a deli or grocery store, muffins from a coffee shop, hot dogs and other fast food prepared on site at a convenience store, and certain alcoholic beverages.

Sit-down menus, menu boards, and drive thru menus will have to list calorie information and provide a brief statement about suggested daily caloric intake.

Other nutrient information—total calories, calories from fat, total fat, saturated fat, trans fat, cholesterol, sodium, total carbohydrates, fiber, sugars, and protein—will have to be made available in writing, upon request.

Operators or owners of 20 or more vending machines must display calorie information on or near the machine.

The FDA said the law will apply to approximately 298,600 food establishments, organized under 2,130 chains.

The administration’s estimated total initial cost to comply with the requirements is $388.43 million, with a recurring annual cost of $55.13 million.

What it Takes to Comply

The FDA has calculated the specifics of each cost incurred to comply with the rules, including: collecting and managing records of nutrition, nutritional analysis, replacing or revising existing menus and menu boards, dietician advice, training employees to understand nutrition information, and legal review to check requirements.

For example, the length of time an employee is expected to take just to do paperwork for ordering new menus and menu boards is 30 minutes per establishment, which translates to a total of 53,084 hours per year, according to FDA.

For lab testing, the average cost per menu item is $650, plus $100 for packing and cold shipping; database analysis is much cheaper costing $25–$100 per menu item but is a tedious process to input each specific ingredient, its type (for example, what kind of olives), and exact quantity.

Hiring a senior dietician or nutritionist can cost $56 per hour, according to FDA estimates.

The FDA has calculated the costs of complying, but their estimates and what business owners are saying can be radically different, which has been a main point of contention.

In the public commenting process, people in the restaurant industry submitted projected costs, but the FDA often responded with much lower estimates.

For example, one submission gave specific estimates of $1.7 million to replace signage and $3.8 million for training costs. These costs were in reference to 1,114 stores over 10 chains.

Individual franchise owners under larger chains will feel the impacts the most.

In response, the FDA said that according to their data the costs for signage would be $1.3 million and training costs would be $1.25 million.

In another submission, the cost for menus and menu board replacements was estimated to be between $50,000 and $100,000 for four menu boards and many sit-down menus.

The FDA replied stating this was above the range supported by their data. At a maximum, four menu boards should cost $28,400 and sit-down menus around $2 each.

A further submission estimated the total costs of implementing all the rules to be between $5,000 to $15,625 per establishment (based on a chain with 1,600 outlets). The FDA replied saying according to them, the industry averages should range between $90 and $2,163 per establishment.

Individual franchise owners under larger chains will feel the impacts the most, as some may only own one or a few restaurants, but are still subject under the rules. Although some costs are shared, franchise owners will still feel a heavy economic toll.

The supermarket industry has repeatedly questioned the FDA’s regulation, citing the need for clearer guidance on rule specifications and enforcements.

The Food Marketing Institute (FMI), a trade association for food retailers, wholesalers, and suppliers, said that the FDA’s regulations make sense for restaurants, but don’t translate effectively or efficiently to retailers like themselves, where most meal items are sold individually.

FMI CEO and President Leslie G. Sarasin said in a statement to the FDA:

“The irony of the law and the 395-page chain restaurant menu labelling regulation is that in the supermarket context, the issue isn’t about menu labelling. To the contrary, for grocery settings, what we’re really talking about are the challenges associated with applying these menu nutrition labelling rules to items that don’t even appear on a menu or menu board.”

Sarasin said since the final rule was released in December 2014, FMI members have continued to struggle with a large number of unanswered issues and may still need more time to comply.

While there are still issues to work on, most stakeholders seem optimistic the extra year will give enough time to reach solutions.

Both supermarket associations support the proposed Bill H.R. 2017, which would offer their members more flexibility. For example, it would allow groceries to choose whether to disclose nutritional content for the whole standard menu item, or per serving, or a common unit division.

Supermarkets would also be allowed to use a menu or menu board in a prepared foods area or next to a salad bar, rather than individually labeling each item.

For restaurant chains, the National Restaurant Association said they’ve been working closely with the FDA to develop uniform federal national labeling standards. This is better than the current situation where multiple states and localities are pursuing their own menu initiatives—such as New York City’s salt warning labels—which is complex and very costly.

Fernandez expects the restaurants will be prepared when the new law is launched.

“We have asked FDA for guidance on a few issues but with proper clarification, we are hopeful our members will be ready by the 2016 deadline,” said Fernandez.