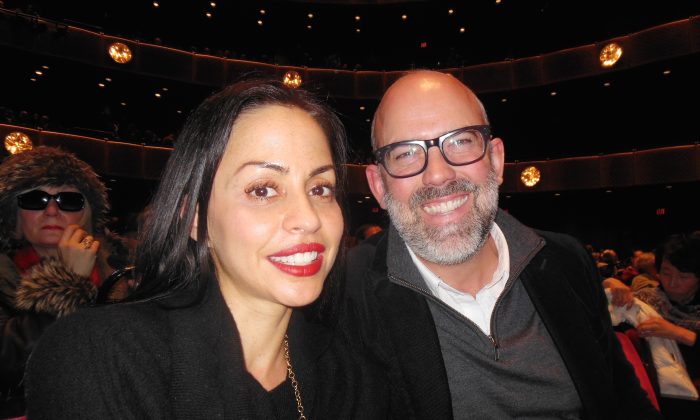 NEW YORK—Michael Silvia, CEO of Silvia Group and his wife Pam Bristow, Executive Vice President of Ghurka, were mesmerized by what they saw when they saw Shen Yun Performing Arts at Lincoln Center on Jan. 18.

“I think the most impressive part was the glimpse into China’s vast history,” said Mr. Silvia. “The costumes are beautiful, the music is unbelievable, the dancers are incredible, but it was fascinating to take a look all the way back to kind of the beginning of China itself, and Gods coming down and creating this celestial empire here on earth and kind of following that through dance and amazing costumes. It’s visually stunning but it’s also for you to sit back just emotionally and culturally amazing.”

She was inspired by the visual feast of the ladies’ costumes, which included shimmering Hmong silver headdresses and bright phoenix capes that billowed in the mist.

“I love the costumes. It is absolutely gorgeous … and very different from anything you see in Western dance,” Ms. Bristow said.

She said she was intrigued by the unique color combinations. “Like the pink and the green together… is not something you would see very often. And I love that, it is very beautiful,” Ms. Bristow said of the women’s costuming in a couple dances. All of Shen Yun’s costumes are handmade each season.

Mr. Silvia added that the colors “are so striking and so beautiful, it just kind of expands your eye in terms of what a palette can look like.” He said that he felt a “sense of excitement” as the curtains opened.

Ms. Bristow also lauded the historical and cultural events brought to life in the performance.

“It is very beautiful; it is very spiritual,” Ms. Bristow said. “I have no idea that the pieces were going to be so connected to this through history, the spiritual history of China.”

Mr. Silvia said, in the context of watching the performance on U.S. soil, “It’s powerful just sitting [here]. Our country is very, very young compared to the culture of China, and it’s a message you don’t always get here in the U.S.—the kind of rich heritage of the land. So that in itself is very valuable for me, and I’m a fan of the music and the costumes, [and] the stories behind the creation of the land itself,” he said.

In 2006, a group of leading preeminent Chinese artists founded Shen Yun to create a truly authentic Chinese cultural performance. Judging by the reaction of audience members such as Ms. Bristow and Mr. Silvia, they have more than succeeded.

Part of the mission of the New York-based company is to revive China’s rich ancient culture. The company’s website explains that behind the narratives from legends and folk tales there are principles such as benevolence and justice, propriety and wisdom, respect for the heavens, and divine retribution.

These ideas have always been part of China’s culture until the Chinese Communist Party took power in the late 1940s. For decades it has launched various campaigns—most notably the Cultural Revolution—to destroy not only cultural sites, temples, and relics, but also the Chinese people’s belief in virtue and faith in the divine.

She went on to say: “So, it is not just about the dance … there is a message they are obviously trying to share with us. I think it is one of peace and acceptance, and compassion.”