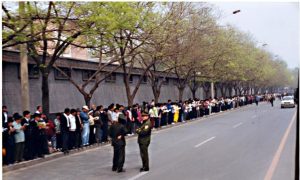 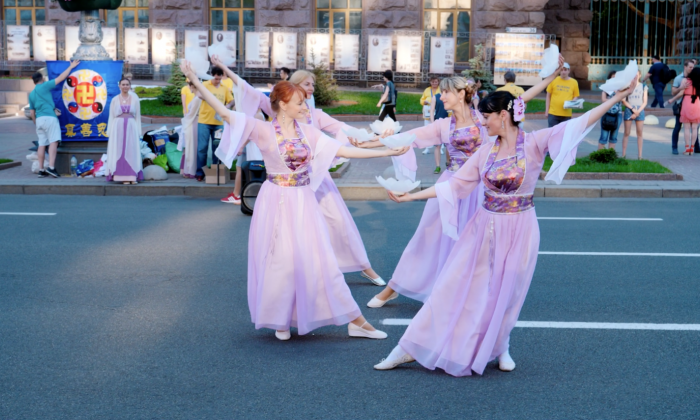 Ladies perform a traditional Chinese dance as part of a celebration of Falun Dafa, in Kyiv, Ukraine, on June 1, 2019. (NTDTV)
World Culture

Practitioners of Falun Gong, also known as Falun Dafa, from various countries gathered in the center of Kyiv, Ukraine, on June 1 to share the beauty of the practice and present traditional Chinese culture to locals.

As passersby looked on, dozens of practitioners clad in bright yellow shirts passed out informative leaflets and demonstrated the practice’s slow-moving qigong movements.

Practitioners attending the event spoke to NTD about their own experiences in learning the meditation discipline. Many reported that Falun Dafa has brought calmness and compassion to their lives.

One participant, Victoria, said the practicing has greatly benefited her life.

“It helps me to be more patient, kinder, and calmer. It has become easier to understand other people’s opinions, even if they are different from mine,” she said.

Victoria, who has practiced Falun Dafa for more than 20 years, also described the three principals that the system teaches.   “Falun Dafa carries ancient moral and traditional principles. They are Truthfulness, Compassion, and Forbearance, which today’s society really needs,” she continued.

Alexander Grigoriev, another participant, described a similar feeling throughout his 19 years of practicing the spiritual meditation.

“My health has improved, I have become less tired, energy has appeared, a second wind has opened. I became more calm and balanced,” he stated.

The five meditative exercises of Falun Gong are described as relaxing, a method of stress reduction, and beneficial to both the mind and body. The first four are performed while standing, while the fifth is a seated mediation. All five are done in an empty, serene state of mind that still has a sense of purpose.

Solomiya, another participant, explained the value she sees in performing the mediation exercises.

“I like to do the exercises because they calm me down and strengthen me,” she said.

Ladies perform a traditional Chinese dance as part of a celebration of Falun Dafa, in Kyiv, Ukraine, on June 1, 2019. (NTDTV)

In a more somber section of the event, practitioners also sat in remembrance of the many lives lost in the now 20-year persecution of the practice in China under the Chinese Communist regime.

In 1999, after the practice spread like wildfire by word of mouth across China, the Chinese Communist Party began a brutal crackdown on Falun Gong. Persecuted only for their wish to practice their faith, those incarcerated are amongst the prisoners of conscience who continue to face danger in China today.

Amidst the sound of Chinese waist drums, onlookers expressed their thoughts about the event with an NTD reporter.

One such person, Lyudmila, commented on the positivity of the display.

“I really enjoyed this event. The people are very friendly. This action is positive,” she said.

While another viewer, who asked to remain anonymous, mentioned the meditation demonstration.

“Through meditation, you can improve your mind and body,” they said.

Alisa Sheremetyeva shared that she also found the event positive and meaningful.

“This activity is wonderful, firstly, because in general, I like Eastern culture and meditation a lot,” she said, adding, “The positive attitude unites people.”

Falun Dafa is taught in person and online for free across the globe. The event organizers plan to hold similar events in Kyiv in the future.