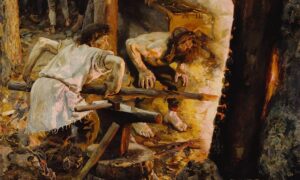 A Harmonious Culture Creates Riches: ‘Forging of the Sampo’
0 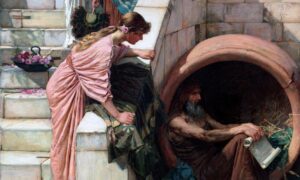 Diogenes and the Pursuit of Truth
0 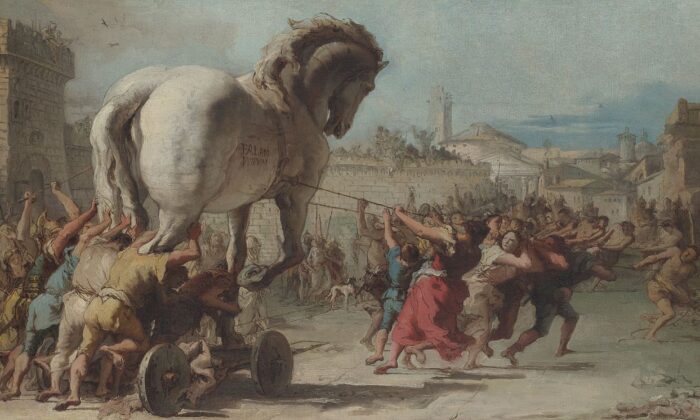 “The Procession of the Trojan Horse in Troy,” circa 1760, by Giovanni Tiepolo. Oil on canvas, 15.3 inches by 26.3 inches. National Gallery in London. (Public Domain)
Fine Arts & Craftsmanship

Sometimes, things appear too good to be true. The dangerous and harmful can be masked by promises of beauty and pleasure.

I’ve been thinking a lot lately about promises of worldly utopia and how these promises have historically led to bloodshed. Ideologies such as these often give their adherents a sense of superiority grounded in a moral absolutism that refuses any opposing viewpoints, and in so doing, enemies are created out of those who would otherwise be friends.

Why do we continuously accept ideologies that lead to violence and harm? Is it simply because they seem good on the surface? Thinking about accepting things that initially seem good but turn out to be detrimental leads me to the epic story of the Trojan Horse.

In Book II of Virgil’s “Aeneid,” Aeneas sorrowfully tells the story of Troy’s fall from a Trojan’s perspective. Troy and Greece had been at war for some time. The Greeks were losing but came up with a plan to try to shift the war in their favor.

The Greek soldiers decided to build a massive wooden horse in which they could hide and, at the perfect opportunity, strike the Trojans. They left the horse at the gated entrance of Troy, and the Trojans were dumbfounded at the wooden horse’s seemingly random appearance.

The Trojans found a young Greek, Sinon, with the horse when they went to investigate. Sinon told them that the Greeks fled after a failed sacrifice.

The Trojan priest, Laocoon, warned the Trojans that it was a trick and threw his spear at the horse in protest. Two giant serpents rose from the sea and engulfed Laocoon and his two sons. The Trojans took it as a sign from Minerva, and they wheeled the large horse through their gates and into their city.

That night, while all of the Trojans were resting, Sinon opened the belly of the wooden horse to let out the hiding Greeks, and they spent the night unleashing havoc on the unsuspecting city.

The Movement in Tiepolo’s Composition

The Italian 18th-century painter and printmaker Giovanni Tiepolo organized a high-energy but balanced composition as a study titled “The Procession of the Trojan Horse in Troy” for a painting that is now lost. The left side of the composition is heavier than the right because of the size of the wooden horse. The size and contrast of the horse make it the focal point of the composition.

Though the left side of the composition is heavier than the right side, the composition maintains balance because there is a sense of movement occurring from left to right.

This movement from left to right is a gestalt-type design element, in which the whole of the composition has greater impact than the sum of its parts. In other words, our minds are impacted by the impression of movement that the whole composition gives us instead of a sense of imbalance that could be suggested by the heavier left side.

Facing the Fate of the Trojan Horse

Unfortunately, it’s much more difficult to look at our lives as a whole in the same way Gestalt psychology suggests we see a composition. We seem to be more likely to compartmentalize aspects of ourselves that we particularly like or dislike, and we thus analyze ourselves in parts instead of as a whole.

For instance, we may analyze our finances, or our health, or our relationships, our education, our spirituality, and so on, with the idea that if the part is improved, maybe the whole will be too.

But who are we holistically? It may be impossible to see ourselves as a whole since it’s difficult for us to remember every aspect of our past and we don’t know our future. Does this make us more susceptible to taking on harmful beliefs and practices that we otherwise would not? Does this make us more likely to accept “Trojan horses” into our own lives?

The unfortunate truth about a Trojan horse is that none of us know it’s a Trojan horse until it’s too late. We sometimes accept things—objects, ideas, people—into our lives that seem good, beneficial, fun, exciting, and so on, and only later do we find that these things are not as we initially thought.

Those of us who express our sincere concerns about the potential dangerous consequences of accepting certain objects, ideas, and people into our lives sometimes find ourselves experiencing a backlash we weren’t expecting. Perhaps even when we can see evil in our midst, as Laocoon did, anger—his throwing the spear—is not a wise reaction. It may lead to further harm and unexpected consequences.

To me, the Trojan horse is the epitome of unexpected harm, but it is also fated. Could the Trojans have avoided this fate? At one point in Virgil’s epic poem, Venus tells Aeneas that the fall of Troy is the will of the gods.

We may not be able to control fate itself, and attempts to do so may easily be co-opted by mindsets of manipulation, greed, jealousy, and so on. And these mindsets become pathways for harm to enter our lives and the lives of those around us.

What we can do is control how we respond to what happens in our lives. And this is what I get from Tiepolo’s composition: balance. Tiepolo painted what was fated to happen: The citizens of Troy bring in the horse that will be their demise, and there’s no stopping it. The weighted left side will soon enough be the weighted right side, and the pendulum swings as it will.

Tiepolo painted this event with so much movement that we’re unable to see the painting without expecting the inevitable. All of the citizens, by way of their own efforts, push and pull the inevitable in. Everyone, despite whether they’re on the right or left side of the horse, has a hand in Troy’s demise.

We’ve had an eventful 2020 to say the least. Maybe, because of a lack of balance in our approach to living, none of us are innocent: Maybe we all are complicit in these events as they unfold for better or for worse.

We don’t know what the future holds. But maybe, if we don’t lash out in anger at what appears to be our fate, if we instead question ourselves on how we’re inclined to respond to our circumstances and take a balanced, that is, calm and rational approach to what may seem inevitable, maybe fate will spare us the harm of having Trojan horses in our own lives.