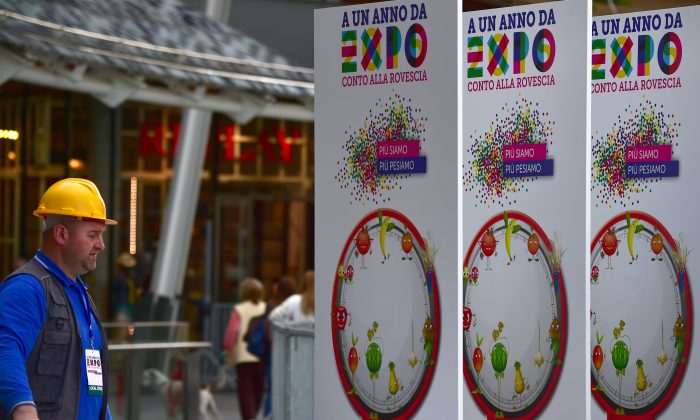 A worker installs signs promoting the 2015 universal exhibition (Expo 2015) on April 29, 2014, in Milan. Expo 2015 is the next scheduled Universal Exposition and will be hosted by the city of Milan, Italy, between May 1st and October 31, 2015. (Giuseppe Cacace/AFP/Getty Images)
Art Marketplace

ROME—A first step to what will be a global event next year has been made: tickets for the Expo 2015 in Milan are for sale. The big event reflects both opportunities and challenges that Italy must face. Delays in the construction works, relationship between art and territory, the watchmen against corruption.

A little more than 220 days from the opening ceremony – 21 million visitors expected within 6 months, an economic benefit around €34 billion according to the organizers – tickets will have the symbolic function to work as an access key for a different Italy. The country will become a space to discover, not just the Milan region, or the famous destinations.

“We must see the Expo as an opportunity to bring people not only to Venice and Florence, but also to places less well-known, which could appeal to foreigners, but we are not there yet,” said Giuseppe Sala, the main responsible for the event, at a press conference.  He introduced the ticket prices, and launched a proper application for smartphones and tablets.  This app will work as a personal assistant to plan the visit inside and outside the territory of 1,1 million square metres of the Expo.  5,8 million tickets are already booked online, he stated.

According to Mr. Sala, the government in Rome should coordinate and give a push to the 20 Italian Regions, so they would become more active on a side program that goes hand in hand with the Expo, since “there are no packages for incoming visitors prepared yet”.

This could be an opportunity to bind the agri-food business with tourism. Places less well-known could be discovered and explored by Italians themselves. The Expo theme, ‘Feeding the Planet, Energy for Life’, goes along well with the only economic sector that shows a positive trend in a country in recession. It is the primary sector – mainly agriculture – which is the ambassador of the ‘Made in Italy’ quality abroad.

“Italian agri-food products are the most popular, and also the most copied, in the world. The Expo is a historic opportunity to introduce our authentic productions, born from a unique and inimitable territory,” said Roberto Moncalvo at the time of signing the agreement with the ‘Italian Pavilion’. Mr. Moncalvo is the president of Coldiretti, the main Agricultural Trade Federation in Italy.

No Taxes in Italy?

For the 147 official participants – including three international organizations, namely UN, EU, and CERN – there is good news: they hardly have to pay any taxes. The announcement came out by the Internal Revenue Agency last week. It sounds encouraging for a country that has the highest taxation in Europe (65,8% against an average of 41,1% data World Bank), and globally scores on 138th place (out of 189) for fiscal complexity.

A move that is trying to attract the 32 countries that have agreed to participate, but who have not yet signed the contract.  Among them are some ‘bigs’ like Australia, Canada, New Zealand, South Africa, and the Scandinavian countries. The exceptional tax regulation makes it easier for these countries to join from an economic point of view.  This way they can show their best to the world. The only tax left, will be 22% VAT to all the items sold during the manifestation.

“Every step that goes in the direction of greater clarity about the fiscal regulation, is undoubtedly positive,” said Carlo Sangalli, President of the Chamber of Commerce in Milan in an interview with Wired Italy. “The message sent by the Internal Revenue Agency to the Expo 2015 participants, is one of great importance,”, he mentioned.

Bribery Will Not Stop the Works

It is reasonable to expect that the Italian bureaucracy maze is not the only element which might intimidate a lot of countries.  There’s also a national plague called bribery, that does not shed a good light on the event.

The storm that struck high level cadres of the logistic machine in May 2014 – seven people were  arrested for bid rigging – has shown a new crack in the Expo 2015 wall. On September 17, Antonio Acerbo, main responsible for all Expo infrastructure, has been placed on the list of people under investigation.

The emblem of the Italian Pavilion could also be at risk: it’s the so-called ‘Tree of Life’, a modern tree structure, designed to reach 35 meters in height, and to ‘dazzle’ visitors with light bears.  It  shows the many facets of Italian identity.

Mr. Acerbo might be another ‘bad apple’, using the words of Anti-Corruption National Team Chairman Raffaele Cantone, whose job is to ensure, along respecting legality of the contracts, the investigations won’t stop the work in progress.

So far “we reached about 80%, we have a 3 to 4 months delay, due to bad weather and legal troubles,”Mr. Sala said during the press conference, adding that the deadline will be respected, since companies involved in the construction sites are now working 24/7.

The European Commission was worried about the delays. The main coordinator, David Wilkinson, sent a letter a few weeks ago to complain about the possibility to set up the EU Pavilion in February instead of December.  “It will be impossible [to set it up],”  but after the meeting in Milan “we got guarantees that our space will be ready on time, so to respect the goals, we have to participate at the exposition,”Wilkinson said according to the portal expo2015contact.it.

You can read the original Italian article here.