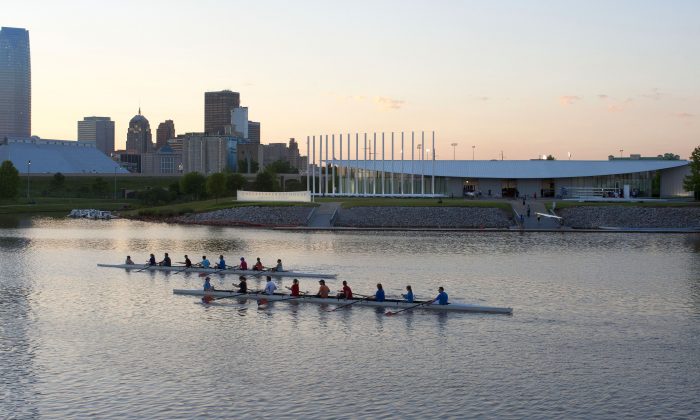 Being a city kid who grew up in Manhattan, I have a weakness for cowboy boots. When I found out that Oklahoma is as much of a cowboy state as Texas, although not as highly ranked on everyone’s bucket list, I knew I had to check out this Midwestern state.

Luckily, an invitation to visit Oklahoma City came my way for the opening of Tru, Hilton Hotel’s 5,000th property. Tru is a new midscale lodging alternative for younger travelers used to hanging out in a centrally located, communal environment while they surf the net or network with colleagues. Before you could say “giddy up” I was heading to the airport with the rousing lyrics from Rogers and Hammerstein’s musical “Oklahoma!” swirling in my head.

Oklahoma City has more sights and attractions than I had imagined, one being Stockyards City, a district featuring all things Western including live weekly cattle auctions, delicious steak, shopping, and live music.

A must-see is the National Cowboy and Western Heritage Museum, which immortalizes Buffalo Bill, America’s iconic Wild West character. The museum has 28,000 Western and American Indian art works and artifacts, as well as the world’s most extensive collection of rodeo photographs, barbed wire, saddlery, and early rodeo trophies.

I learned that Oklahoma was set aside for the exclusive use of Indians and was called Indian Territory before it became a state. In 1889, the land was opened to settlers in what became known as the Oklahoma Land Rush, and on opening day, April 22, 1889, 50,000 people swarmed into the area to settle. The Buffalo Bill statue that was installed in 1977 on the southeast ridge of Persimmon Hill serves as a tribute to the spirit of the West and to the man who embodied this spirit.

On a more sombre note, the expansive Oklahoma City National Memorial and Museum is a breathtaking memorial that commemorates the domestic terrorist bomb attack on the Alfred P. Murrah Federal Building in downtown Oklahoma City in 1995. Carried out by Timothy McVeigh and Terry Nichols, the bombing destroyed one-third of the building, killed 168 people, and injured more than 680 others. Try to go at sunset when the light is magical as it spreads across the gravestones and the Survivor Tree.

Another highlight was the American Banjo Museum, one of the most unique museums I’ve ever visited. It chronicles the history of this stringed instrument from its African roots to the 1920’s and on to the present day in bluegrass, folk, jazz, and world music, with exhibits and live performances. Interactive exhibits let you pretend you’re a banjo performer—thankfully without an audience.

There’s also the Oklahoma City Museum of Art, which presents three to four permanent exhibitions and traveling exhibitions, ranging from the art of ancient Egypt and French Impressionism to emerging contemporary artists. While there I saw “Dale Chihuly: Magic & Light.” Chihuly is a 76-year-old American sculptor whose works are considered unique in the field of blown glass.

Nearly every city in America is re-discovering and reviving its downtown and Oklahoma City is no exception, as the city begins to attract more convention business.

The recently renovated Bricktown entertainment district, a former warehouse and factory neighborhood with buildings constructed of bricks (hence its name), is a very popular and vibrant downtown destination for dining and nightlife—especially for sampling some of the city’s best barbeque, if you’re a meat-lover like I am. I can’t name a favorite barbecue place because every morsel of meat I tasted at different restaurants was as good as the previous one!

Another clever re-invention of city planning and development is Automobile Alley, a renovated district which offers a wide range of services and dining options. Automobile Alley is a historic district with brick or concrete low-rise buildings, developed primarily in the 1920’s as a commercial district north of downtown. At that time, 52 of Oklahoma City’s first 76 auto dealerships were located along Broadway Avenue. The area declined in the ’70s and ’80s, but has slowly been rediscovered by locals committed to revitalizing and restoring it.

Every city worth its vegetation has a botanical garden. Myriad Botanical Gardens offers 17 acres of landscaped gardens, which were especially colorful in late May during my visit, and an interactive outdoor park for events, horticultural classes, and enjoying leafy open spaces.

Oklahoma City clearly has a lot going for it and has been able to utilize local resources to reinvigorate itself in a most pleasant and memorable way.