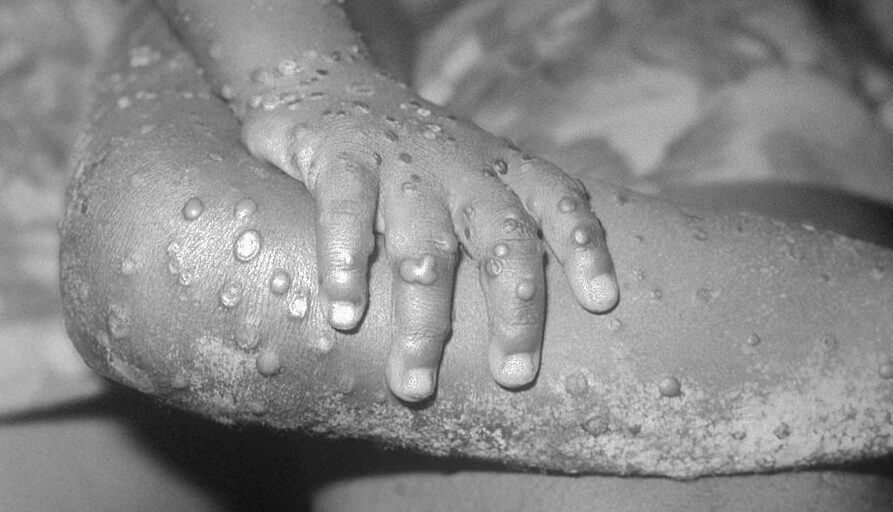 A 1971 photo from the Center For Disease Control handout shows monkeypox-like lesions on the arm and leg of a female child in Bondua, Liberia. (CDC/Getty Images)
Bright

Experts: Monkeypox Pandemic in Europe and North America May Have a New Mode of Transmission

Recently, as the COVID-19 pandemic seems to be coming to an end in Europe and the United States, another infectious disease has emerged. Dozens of confirmed or suspected cases of monkeypox have appeared on a large scale in more than a dozen countries. The disease has been rare outside of Africa in the past, and this time it is occurring in a different population than before. Experts are concerned about the emergence of a new mode of transmission.

As of May 21, 2022, more than 80 cases of monkeypox have been reported in at least 12 countries in North America, Europe, and Australia.

Confirmed cases have been reported in nine European countries, including the United Kingdom, Spain, Portugal, Germany, Belgium, France, the Netherlands, Italy and Sweden, as well as in the United States, Canada, and Australia.

The World Health Organization (WHO) said in a statement on May 20 that it was investigating an additional 50 suspected cases and warned that more cases might be reported. The statement also emphasized that the recent outbreaks were “atypical, as they are occurring in non-endemic countries.”

In general, monkeypox usually occurs in regions such as Central and West Africa, where there are hundreds of cases each year. However, most of these recent cases are not associated with Africa.

Anne Rimoin, a professor of epidemiology at the University of California, Los Angeles (UCLA) Fielding School of Public Health, told NBC News that this is one of the most important outbreaks in the history of monkeypox in the Western Hemisphere.

The rash usually starts one to three days after the onset of fever and mainly appears on the face (95 percent), extremities (75 percent), oral mucosa (70 percent), genitalia (30 precent) and conjunctiva (20 percent), and the cornea is also affected. The rash changes through different stages, and it may resemble chickenpox. It eventually crusts over and then peels off.

Complications of monkeypox include bronchopneumonia, sepsis, encephalitis, corneal infections, and loss of vision. The extent to which asymptomatic infections may occur is not known.

The incubation period for monkeypox is usually six to 13 days, but can be extended to 21 days. Its symptoms last two to four weeks, and the mortality rate is around 3 percent to 6 percent.

Recent Outbreaks of Monkeypox May Have a New Mode of Transmission

What worries academics and health officials is not only the large number of cases of monkeypox in non-endemic countries, but also the fact that its current mode of transmission seems to be different from what was previously known.

It is known that monkeypox can be transmitted to humans through close contact with infected people or animals, or with materials contaminated with the virus. Ways to contract the virus include:

The majority of the patients in these recent cases in Europe and the United States have been young men. And the monkeypox epidemic occurs mainly among gay, bisexual men, men who have sex with men.

Nevertheless, there has been no previous record of sexual transmission of monkeypox.

Neil Mabbott, a disease expert at the University of Edinburgh, told the Associated Press that the recent cases suggest a potential new mode of transmission, that is, the virus can be transmitted sexually.

Keith Neal, an infectious disease epidemiologist at the University of Nottingham, said that the mode of transmission might not be sexual activity, but the transmission might be through “the close contact associated with sexual intercourse.”

The Risk of Infection is Higher for Gay, Bisexual People?

Scientists are still studying whether or not the monkeypox epidemic is actually being transmitted through sexual behavior.

Dr. Agam Rao, a medical official at the Centers for Disease Control and Prevention (CDC), said that research was needed to isolate the virus from semen or vaginal fluid. Therefore, much work still needs to be done before confirming that monkeypox can be transmitted sexually.

Nevertheless, according to previous studies, sexual transmission of viruses is indeed more likely to occur among  people who have male-to-male sex. This is consistent with the spread of monkeypox.

According to the CDC, sexually transmitted diseases among gay and bisexual men have been on the rise. And in 2014, men who have sex with men accounted for approximately 83 percent of syphilis cases in the United States.

These groups are known to be at high risk for the following STDs: human papillomavirus (HPV), HIV, syphilis, chlamydia, gonorrhea, hepatitis B, and genital herpes.

How does a virus enter the body during sexual contact? Here is an example involving the commonly seen HIV virus: A Canadian study in 2019 found that the epithelial cells of the human body’s submucosa can block the HIV virus from invading human cells. However, when the epithelial integrity of the mucosa is destroyed by physical abrasion, the virus will enter the submucosa and infect the human body.

The study has also shown that the susceptibility of the human body to viral attack is also related to different epithelial sites. Compared to the epithelium of the female and male genital organs, the anorectal epithelium has the highest probability of HIV transmission at 0.3 percent to 5 percent, while the oral mucosa has a lower probability.

Not only does the mode of sexual activity affect the risk of STDs, but the number of sexual partners is also associated with this risk.

Although the route of transmission of the new wave of monkeypox is still unclear, health officials in several countries have taken action.

The UK Health Security Agency has advised people, who are gay or bisexual or have sex with men, to be aware of any unusual rashes or lesions on genitalia and any other part of the body.

After the first local case of monkeypox was discovered, the authorities in the United States have also instructed health care providers to be aware of patients with monkeypox rashes, especially physicians who treat patients with sexually transmitted diseases.

Currently, there is no specific vaccine for monkeypox, but the smallpox vaccine provides 85 percent protection, because the two viruses are very similar. In addition, an antiviral drug used to treat smallpox has been approved for use in the treatment of monkeypox.

Countries such as the United Kingdom and Spain have purchased vaccines in response to the outbreaks.