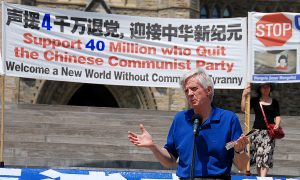 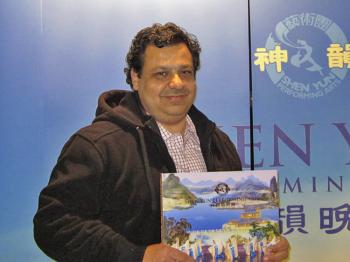 Mr. Mina, an architect who owns a real estate development firm, liked the New York-based company precisely because it gave a glimpse of ancient Chinese civilization.

China has “a great civilization and myself as Egyptian, we also have a very ancient civilization, and it is the first time for me to get to know the Chinese civilization,” he said.

As an architect, Mr. Mina could comment on the design elements of the show: “There are many elements that grabbed my attention. First of all, the colors, the match up of colors: the design of the backgrounds [and] the dress of the people—I really enjoyed.”

Many people have commented how the colors of the handmade costumes complement the scenes adorning the backdrops.

Shen Yun aims to present Chinese culture as it once was: a study in grace, wisdom, and the virtues distilled in the five millenia of Chinese civilization, according to its website.

“It was the bringing the past to this moment. It was really one of a kind,” Mr. Mina said

“I would say that I have experienced 5,000 years of civilization in maybe 2 hours!”