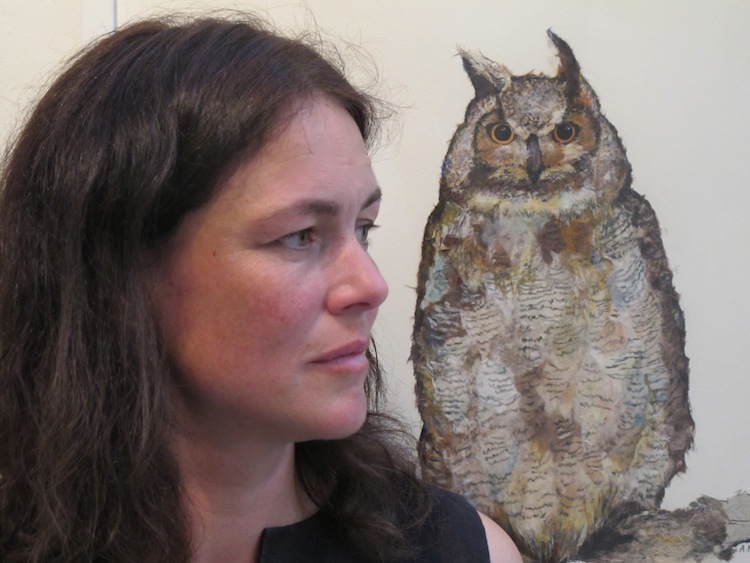 The iguana is peering over its shoulder, the macaw is staring inquisitively, and the owls are perched comfortably, wrapped warmly in their feathers.

“Collecting wonderful things from the natural world – I like that,” explains artist Alexandra Milton, who creates life-like collages of birds and animals. The Epoch Times caught up with her at the Rebecca Hossack Gallery, while surrounded by colourful creatures from all over the world. Each inhabited clean, white frames. A modern day cabinet of curiosities came to mind.

It was almost like being in an aviary; surrounded by bright blue, green and yellow macaws on one side, and a bird of paradise on another. And if you took a closer look, there were even small fragments of text incorporated into the paper, the species name, or a proverb.

“There’s a game element as well, it encourages people to look closely,” says Milton, who rediscovered her passion for art three years ago.

In fact, Milton was born into a family of artists; her grandfather painted animals, and had amazing aviaries with owls. She explains how she found it quite daunting having a grandfather and father who had good reputations as artists: “I thought, ‘I wonder if I can compare to them..’ it discouraged me a bit, but I always carried on doing art.”

It was only when there was a big exhibition of her grandfather’s, father’s and all the grandchildrens’ work (one cousin is a book illustrator, another an artist, and her brother is a jeweller…) that Milton exhibited her collages to the public – and they proved very popular.

“I had some of my birds there, and they all went, people really liked them, so I thought, ‘I’ll carry on,'” she recollects, and her hard work has paid off.

“While my children were at school I just did art, and that led to the first book Call Me Gorgeous! being published.”
It is truly a family affair – her husband, Giles Milton, is an author, and wrote poetic lines to accompany his wife’s beautiful illustrations.

Last month, Milton’s second children’s book Good Luck Baby Owls, launched in The Rebecca Hossack Gallery, Charlotte Street, London. Several special species of animals and birds were exhibited there too, including the original images from the book.
“I’ve always loved doing owls,” says Milton, “they are so fantastic with their expressions, and their feathers, and the delicate, subtle colour shades.”

They are incredibly realistic, as Milton has recreated the colours and textures found in nature. In a sense her artworks reflect the realistic documentation of animals made hundreds of years ago, except her medium is unique – the birds are composed of layered Tibetan, Japanese and Indian papers, and the final details are captured with coloured pencil and pigment. Each is like an exotic museum piece.

“You don’t need to have a big explanation of what you are trying to say, you can just enjoy it as it is,” says Milton.

Good Luck Baby Owls by Giles and Alexandra Milton is published by Boxer Press, 2012, £11.99 hardback, 32 pages. It is available at the Rebecca Hossack gallery and in all good bookshops in the UK and the USA