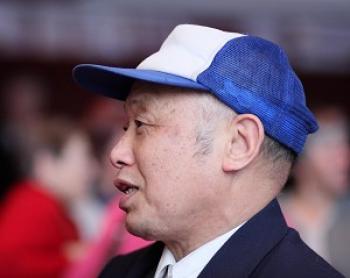 Mr. Chen was exiled to Canada six years ago. He used to be the editor and a journalist for Invention and Reforming magazine in central China’s Changsha City. His series A Former Chinese Communist Informer’s Confession has won acclaim among overseas Chinese readers.

“This is my fourth time coming to the Divine Performing Arts," he said in an interview conducted in Chinese.

"I watched the show in Montreal the past two years and another time in Toronto. I had already said in a previous Epoch Times interview last year that such a good thing one wouldn’t be able to see in mainland China. And this year’s programs are all excellent, and they are all new programs. The dancing artists are vigorous and graceful, the content of the programs are healthy. They represent the beauty of Chinese classical music and dance. All my Western friends enjoy the show, every show here is full, and it is so difficult to get a ticket, it is indeed a fantastic artistic enjoyment. It makes me feel so excited that Chinese traditional culture, with such a long history, could reappear on the stage. I hope the Divine shows can continue this way.”

“The essence of the Divine Performing Arts shows the Chinese divine culture. The beginning of the show pointed out that Buddha and Gods descended from the heaven and created China’s five thousand years of culture. But the line of such culture was broken after 1949. I was ten at that time, now I am 70 years old. I observed for 60 years. Now, there are all modern arts, some of them are good, but none of them could attract people like the divine culture. That is why I come to the show every year. It is such an enjoyment, a purification of one’s heart and soul.”

The Chinese Communist Party, which currently controls China, came to power in 1949 and made systematic efforts to suppress or destroy traditional Chinese culture.

Traditional Chinese culture revolved around a belief in the divine and the importance of cultivating virtue. According to the show’s program: “The guiding mission of Divine Performing Arts is to rediscover and renew humanity’s true, rightful cultural heritage. The company thus creates and performs works that centre upon the true, divinely bestowed culture of humankind, and seeks to provide an experience of consummate beauty and goodness.”

It is a mission Mr. Chen heartily agreed with.

“We are busy with making money and pursuing fame everyday. After coming to the show, one finds another spiritual level in one’s mind. After we jump out of our everyday trivia, we see another beautiful world that gives us hope and purifies our soul. Divine Performing Arts interprets the divine culture in such a visual and musically artistic way. It leads people to feel another world in their heart.”

When talking about the shows’ influence on mainland China, Mr Chen said, “Although the Chinese communist regime blocked the show from entering the mainland, I believe a lot of DVD copies will spread into China. The regime always takes art and culture as propaganda tools, using them to brainwash people, so people reject it. But Divine Performing Arts can purify people’s hearts, so many people come to watch the show. It proves people like it, it is totally different.”

Mr. Chen currently lives in Montreal. He is famous for his novel Record of Hate Instigation in Fuohuai, which reflected on the land reform process in 1950 after the regime took control in China. Chen was tailed and harassed by communist informants because of his works.