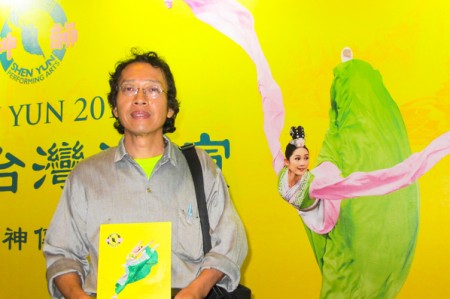 Chung Cheng-Da, owner of a veteran's hospital and lecturer on physiology, believes that his cells were resonating with Shen Yun’s positive energy field. (Liao Feng-Lin/Epoch Times)

KAOHSIUNG, Taiwan—It’s been 10 years since Shen Yun Performing Arts first toured Kaohsiung. This year the tickets for Shen Yun’s seven shows in Kaohsiung have all been sold out and on the evening of March 22, close to 1,700 people gathered at Kaohsiung Cultural Center to enjoy the annual feast of authentic Chinese culture.

“What a superb performance! I should have made it here years ago,” said Chung Cheng-Da, owner of a vet hospital and lecturer on physiology. He was thrilled by the positive energy delivered by Shen Yun’s performance.

What a superb performance! I should have made it here years ago.
— Chung Cheng-Da, owner of a vet hospital and lecturer on physiology

Chung believes that his body is very sensitive to external energy and there was more than once that he received powerful energy during the show. “The sound of the music was able to penetrate to the very depth of me. The bel canto vocalist brought the show to a different level. I could feel my cells vibrating and it was comforting and beyond this world,” as Chung described it.

He believed that his cells were “resonating with Shen Yun’s magnetic energy field.”

“People without a medical background may not know what’s going on, but they should definitely feel it. They can receive the energy passing through the amazing atmosphere, which I believe will ultimately benefit them,” he said.

Chung continued, “The powerful energy comes from the harmony created by the tight coordination of the [Shen Yun] team.”

When asked about his favorite program, Chung chuckled, “It was amusing that the Monkey King effortlessly picked up the pillar that stabilizes Dragon King’s Palace, shrank it, and hid it behind his ear. [Shen Yun] did a fantastic job on the digital backdrop showing how the palace was shaking.”

Chung perceived hope in the stories Shen Yun presented. “Shen Yun delivered the message the divine beings intended for us. In the modern day society, there are always ordeals and set-backs. But none of them matters as long as we work harder and strive to be better people. The divine beings will always be with us and help us through hard times.”

“I am very grateful to be here today. Everyone, no matter where he is, will be moved by the values presented by Shen Yun.” Chung was certain that “these values will create an enormous impact on society and make it more harmonious, and people more compassionate.”

New York-based Shen Yun has made it its mission to revive the authentic, divinely inspired traditional Chinese culture through music and dance. Since 2006, four touring companies of equal size have traveled the world, bringing this ancient civilization to over 100 countries every year.