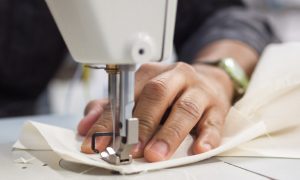 This three-part series raises thought-provoking questions about women artisans in the developing world who are survivors of human trafficking and other travails. These hard-working women artisans are striving to succeed—but their success depends on us. They need a market.

In recent years, we’ve gotten used to seeing news about the horrors of sweatshop labor, and of tragic accidents in unsafe factories. Events such as the Tazreen Fashions fire and Rana Plaza collapse, which resulted in the deaths of over 1,200 Bangledeshi factory workers, momentarily capture our attention, only to fade from society’s collective conscious.

But for the thousands of garment workers suffering from workplace cruelty, unsafe conditions, and low wages, it is impossible to forget. For them, it is not a news story, but an everyday reality.

Most of the clothing sold by large retailers is made in developing countries where work conditions can be dire: employees do not receive a living wage and endure threats and abuse from supervisors. The environment suffers as well—dangerous substances and dyes used in garment production pollute the air and water. The environmental impact is so staggering that fashion is the second highest polluting industry in the world (second only to the oil industry).

But things are starting to change, thanks to a group of conscientious, fashion-forward individuals.

There is a small but growing trend in the fashion industry, and it has nothing to do with latest must-have accessory or hottest color. Slow fashion is, well, coming into fashion.

The slow fashion movement sheds light on the dangers of fast fashion: the fashion industry’s shift towards producing mass quantities of inexpensive, low quality pieces designed to be worn this season and discarded the next.

Fashion is hurting us and our planet, but it does not have to.

From small, web-based companies, to bloggers and even a few big name brands, members of the fashion industry are endeavoring to spread their message: Fashion is hurting us and our planet, but it does not have to.

The Hidden Costs of Fashion

In the new documentary “The True Cost,” Director Andrew Morgan explores how both the quality of products and the rights of garment workers are sacrificed in order to keep clothing prices low.

Morgan notes that the fashion industry employs one-sixth of the world’s population. The majority of these workers are young women in poor nations where retailers have outsourced thousands of jobs. These fragile economies have gradually become dependent on major retailers, which demand the fastest and cheapest products possible. The result is labor exploitation.

If a factory cannot produce enough clothing quickly and cheaply enough, corporations are known to take their orders elsewhere.

For example, clothing factories in Bangladesh (which consistently ranks among the world’s top five garment-exporting countries) employ over four million workers. Emily Daly of Human Right’s Watch explains that very few of these employees receive a living wage, let alone maternity leave, pensions, benefits, or overtime pay. (The minimum wage for garment workers was raised to $68 per month in December 2013, but this is frequently unheeded).

If a factory cannot produce enough clothing quickly and cheaply enough, corporations are known to take their orders elsewhere. This pressure can lead supervisors to prioritize quotas over the well-being of their workers and the quality of their products. Daly notes that workers report that when quotas are not met, supervisors often verbally or physically abuse them. Furthermore, few workers have the resources to fight for better working conditions. Despite recent laws meant to facilitate the creation of unions, employees who try to unionize are often fired, blacklisted, or physically assaulted by their employers, says Daly.

Proponents of ethical production believe that we can no longer ignore this problem. Tragedies such as the Rana Plaza collapse have prompted consumers, designers, and some retailers to call for better employment standards and environmental responsibility. Although larger corporations are slow to implement better working conditions overseas, the demand for ethically-grounded stores is increasing.

What was once a niche market is growing fast. Thanks to the Internet’s capacity to reach consumers all over the globe, companies that sell ethically made clothing are bigger, greater in number, and easier to find than ever before. They range from tiny web-based companies such as BeGood clothes, to large brick-and-mortar shops such as Zady, nicknamed the “Whole Foods of Fashion.”

Each company tackles ethical issues from its own unique angle: some use organic cotton and nontoxic dyes, while others donate proceeds or products to the manufacturing communities. Many ethical retailers practice transparency by providing detailed information about the working conditions and materials that go into making their merchandise.

In addition to allowing shoppers to connect with ethical brands all over the world, the web has also provided a platform for conversation about thoughtful consumption.

The average American throws away 82 pounds of clothing every year.

Slow fashion advocates point out that we no longer buy pieces we alter and mend for years, but instead, as Zady.com puts it, “replace style with trends.” Further, with an increase in production and consumption (up a shocking 400 percent from just twenty years ago), comes an increase in waste: according to “The True Cost,” the average American throws away 82 pounds of clothing every year.

The slow fashion movement encourages buying fewer items of clothing that are of a higher quality, made in humane working conditions. These pieces last longer than a season, and become staples rather than trends. Slow fashion also emphasizes the importance of considering the policies and social and environmental impacts of their products.

Can the world of fashion really change? It depends on who you ask.

Cynics may tell you that small, ethical companies with pricier products will never beat out the big corporations. That may be true. But stores are ultimately at the mercy of their customers. If enough shoppers start caring about what happens before their clothes hit the racks, retailers will be forced to listen. When we shop ethically, we create a market that demands more than just the cheap and the trendy. And as that market grows, it can provide hope and a livelihood to more and more of the people who make our clothes.

Meredith Mosbacher is Chief Media Officer at TO THE MARKET. Her work has been featured in publications including The Huffington Post, Newsweek/Daily Beast, the Wharton Blog, and Enterprising Women. Katie Ellington currently serves as a content contributor for TO THE MARKET. She is a freelance writer who has previously worked for multiple outlets including the Bellville Star and the “She Is Noble” campaign.