Esteemed Scientist: Shen Yun ‘Connects you to all of humanity’ 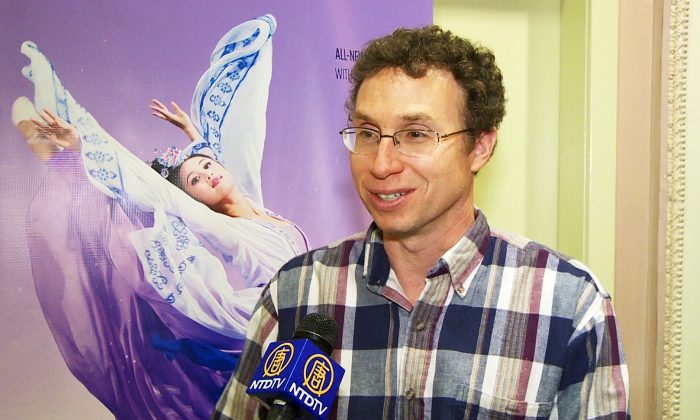 Dr. Andrew Newberg, considered a pioneer in the neuroscientific study of religious and spiritual experiences, saw Shen Yun Performing Arts at a packed Merriam Theater in Philadelphia on May 4. (Courtesy of NTD Television)

“To me, it’s highly spiritual—it’s something that really feels like it connects you to all of humanity,” he said, after seeing the New York-based company at Philadelphia’s Merriam Theater on May 4. “And how humanity is connected to the world in general, it’s a wonderful demonstration of that—an expression of the human spirit.”

Dr. Newberg is director of research at the Myrna Brind Center for Integrative Medicine at Thomas Jefferson University, has been on the cover of both Time and Newsweek, and appeared on various television and radio programs, including Good Morning America.

Dr. Newberg’s cutting-edge research in trying to better understand the nature of religious and spiritual practices and experiences has included brain scans of people in prayer and meditation, and the effect of meditation on memory. His over 150 research articles, essays, and book chapters include “Why We Believe What We Believe” and “How God Changes Your Brain: Breakthrough Findings From a Leading Neuroscientist.”

Shen Yun was a powerful experience for Dr. Newberg.

“I study how the human brain works, and it’s wonderful to see how the music and the movements and the stories all come together to generate a very powerful feeling inside of you,” he said.

“To see the movement, and the stories, and the rituals, it changes the way that you think, and it’s really very uplifting,” he said. “It really changed the way that I think about China. I’ve never really experienced this before; it’s really been exciting and fascinating and interesting to me.”

Shen Yun presents a revival of the 5,000 year-old Chinese culture, one replete with principles and virtues such as a respect for the heavens.

China was once known as Shen Zhou, or The Divine Land, marking a land where deities and mortals coexisted, “and a belief that the divine transmitted a rich culture to the people of the earth,” according to Shen Yun’s website.

While Shen Yun is at the surface sophisticated dance techniques, a unique orchestra, handmade, colorful costumes, and a digitally animated backdrop, there is much more to the performance.

“Digging deeper, one discovers a sea of traditional Chinese culture,” explains the company’s website. “Mortals and divine beings merge on stage as one. Principles such as benevolence and justice, propriety and wisdom, respect for the heavens, and divine retribution, all come to life, washing over the audience. Originating from Confucianism, Buddhism, and Taoism, these ideals are the essence of traditional Chinese culture.”

“It’s a very exciting display of the culture of China, the spirituality of it,” he said. “It’s really wonderful to see it all wrapped up in one expression.”