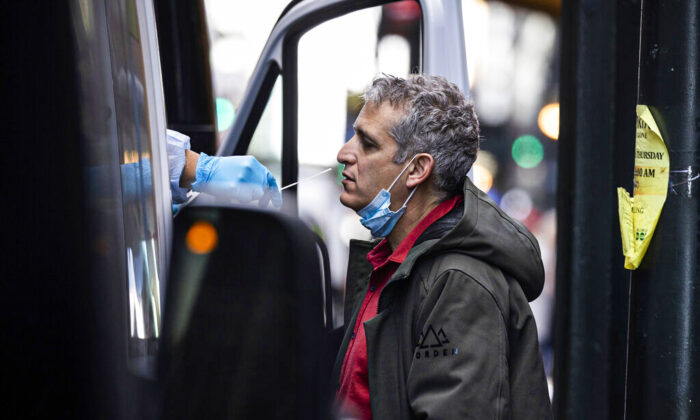 Dr. Omar Hamada on Dec. 1 said that the Omicron variant of COVID-19 may provide natural immunity without inducing severe illness, as the symptoms so far resemble more of a “mild, common cold” in South Africa.

In an interview with NTD’s “Capitol Report,” the emergency room doctor and former U.S. Army Special Forces lieutenant colonel said that even though “we’re seeing an uptick in [the] number of people affected, the severity of disease seems to be, at this point, minimal.”

“If the infectivity is greater, but the virulence or severity is less, this may be actually something good in terms of getting people immune to it without necessarily having to depend on a vaccine that’s not incredibly effective,” Hamada stated.

On Dec. 3 the World Health Organization (WHO) said that Omicron has been detected in 38 countries, up from 23 countries two days prior.

The Omicron variant has also been reported in 11 U.S. states as of Dec. 4, including 15 cases in vaccinated individuals.

One of the cases in the United States so far was confirmed to have recovered from COVID-19 and have natural immunity.

Being mRNA-based, both the Moderna and Pfizer-BioNTech COVID-19 vaccines trigger the body to recognize and attack the CCP (Chinese Communist Party) virus’s spike protein.

Because the Omicron variant has “approximately two dozen mutations in that spike protein,” according to Hamada, the effectiveness of current vaccines against the new variant remains to be seen.

Dr. Anthony Fauci, chief medical adviser to the Biden administration, stated in a Friday briefing that it would “take a while” to know “what the impact is going to be globally and for people who are infected with Omicron.”

While Omicron is spreading rapidly globally, Centers for Disease Control and Prevention (CDC) Director Dr. Rochelle Walensky urged reporters to focus on the Delta variant for the time being during the White House briefing.

“I know that the news is focused on Omicron, but we should remember that 99.9 percent of cases in the country right now are from the Delta variant,” Walensky said.

Pfizer executive Ralf Rene Reinert said he does not “expect that there will be a significant drop in effectiveness” of the current vaccine against Omicron, and emphasized the importance of the booster program, in an interview with Bloomberg on Dec. 2.

When the Beta and Delta variants emerged, Pfizer had already started working on new versions of its vaccines only to conclude that the original shot provided good protection, Reinert told Bloomberg.

Meanwhile, Moderna could have a COVID-19 booster shot targeting the Omicron variant tested and ready to be submitted for authorization as early as March, according to the company’s president who spoke to Reuters on Dec. 1.