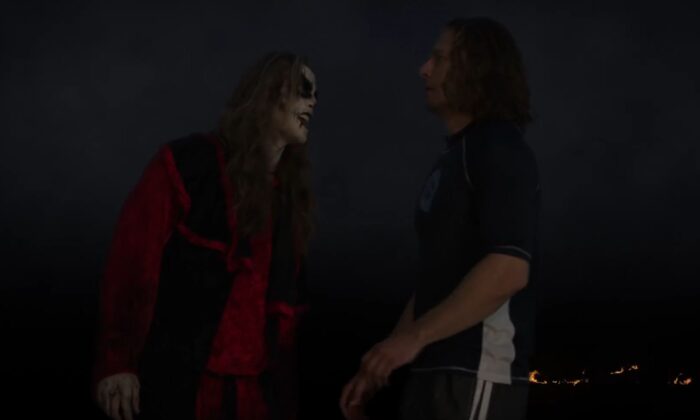 A Sobering Look at Real Faith & and Following the teachings of Jesus Christ.

I’ve been binging on a multitude of faith-based films by director Timothy A. Chey recently, including “20 Minutes,” “Slamma Jamma,” and the oh-so-timely “Interview with the Antichrist.” But I must say, after watching one of his most recent productions, “Journey to Hell,” this may be one of the most impactful. It’s based on the best-selling classic novel of the same name.

The film opens with a group of surfers on a Los Angeles beach who are looking for their missing friend, Shane Badman (John Terrell). The next thing we know, Shane is being rushed to the local hospital emergency room. But it’s too late—he has drowned. We see his wife, Hannah (Emilie Soghomonian), and friends mourning him at his funeral and then we’re suddenly transported to hell, where Shane’s soul is just waking up. He can’t believe he’s actually there and instead thinks he’s in some sort of nightmare. Talk about a rude awakening.

Then, we go back in time several days to see Shane’s life before his fateful surfing accident. He’s just been promoted to managing partner at a major equity firm after quickly climbing the corporate ladder. From the outside, one might say that Shane has everything in life one would ever want—a loving, beautiful wife, posh mansion (in the Hollywood Hills no less), 10 cars, and a circle of friends.

However, the day after his promotion, Hannah approaches Shane because he seems distressed. When she queries him about his dour mood, he remarks: “I worked my entire life for this moment, but I’m still not happy.” Indeed, Shane goes on to say that the promotion is not enough and that he still wants more but is unsure of what that “more” is. When Hannah suggests using some of their disposable income to serve the Lord, he can’t be bothered. He’s too busy for such trifling matters (although he does have time to hang out with his buddies).

When Hannah does manage to drag Shane to church, the leader of their congregation, Pastor Bill (Jeffrey Grinel, looking dead-on like a real-life pastor), tends to talk about hell during his sermons. Pastor Bill mentions that many Christians don’t believe in hell (probably the majority of them) and part of that has to do with not fully accepting Jesus Christ as their Lord and Savior. Another reason is that they want to be the ones calling the shots—the ones in control, instead of turning all of that over to Jesus. During these services, Shane either makes snide remarks under his breath to Hannah—complaining about the pastor’s sermons—or constantly rolls his eyes.

The film switches backward and forward in time, alternating between Shane’s luxurious lifestyle and his suffering in hell (nothing bloody or gory though). Each time we see him in hell, he’s either meeting other bad folks who have been condemned to be there for all eternity—such as Hitler, Mao Tse-Tung (played hilariously by Chey), and the Zodiac Killer—or being reminded about why he’s there and what he did wrong by one of the demons that oversees the throngs of unfortunates.

Hannah tries desperately to get through to Shane, such as reminding him that if he were to obey God and exemplify the fruits of the soul, such as kindness, patience, gentleness, and self-control, he could find that “more” that he’s looking for. But to Shane, merely attaining the most wealth he can, equates to being “blessed by God,” and that material things equal divinity. When Hannah mentions that “we’re in a real spiritual battle right now and most Christians aren’t even aware of it,” he simply dismisses her and walks off. Will Shane change his spiritual perspective around and get a second shot, even from the depths of hell?

I found the acting in this film to be top-notch—especially John Terrell as the power-hungry Shane Badman. He has a special talent for comedic timing and it was really fun watching him try to avoid confronting his spiritual shortcomings. The supporting cast was also great, particularly Emilie Soghomonian as his ever devoted wife.

Director Timothy Chey is certainly an interesting person who has stated that he became a believer later in life (he was once an atheist who thought Christianity should be abolished). During a recent Access Wire press release, Chey remarked that his “hope and prayer” is that his film “scares people out of hell, not scares the hell out of people.” He also added that the film is “very uplifting in the end.”

“Journey to Hell” certainly has the power to scare people back onto the right track, especially so-called believers who are Christians in name only.