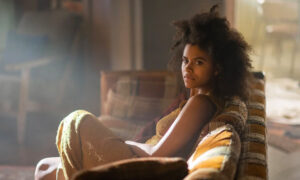 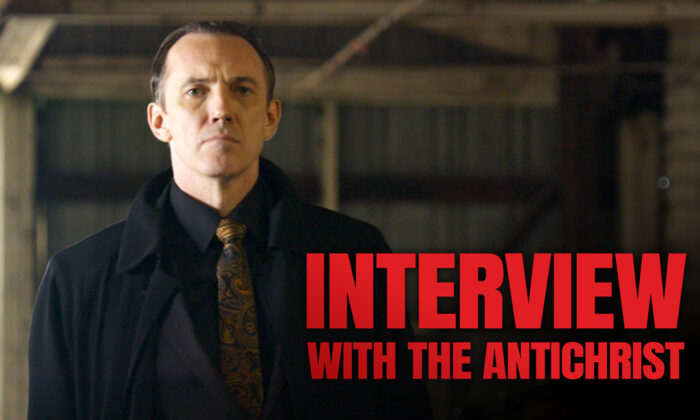 Film Review: ‘Interview With the Antichrist’

Faith-based films haven’t always been up to snuff when it comes to their level of quality. But that has changed in recent years—due in no small part to faith-based filmmakers such as director Timothy A. Chey (“Suing the Devil,” 2011, “Final: The Rapture,” 2013). His latest film (based on a highly rated book of the same title—authored by Jeff Kinley), “Interview With the Antichrist,” is perhaps his most jaw-dropping film project to date, with a veritable plethora of wisdom and reality-bending scenes.

The film revolves around a live broadcast of an interview with the Antichrist (played by Ego Mikitas) that is being watched by an estimated 2 billion people. It’s End Times we’re talking here—right after the Rapture—and death, destruction, and chaos are erupting all around the globe.

“Interview With the Antichrist.” (VGC Studios)

The interviewer, Alex Carter (Aaron Groben, “About Hope,” 2020, “Tawk with Awkwafina,” 2014) has the opportunity to ask a wide array of questions to his diabolical guest, many of which are tied to recent disasters, including 1999’s Columbine shooting (which happened at the high school in Littleton, Colorado), 9/11, (the Sept. 11, 2001 attacks carried out by 19 members of an Islamic extremist group from Saudi Arabia), and the tens of millions of people killed and “disappeared” under the brutal reign of various communist countries and their constituent dictators.

As these questions are addressed by the Antichrist—dressed to kill (pun intended) in a dapper black suit and perfectly ironed paisley tie—we get to learn how they all tie together and relate to the unfolding calamities that are happening all over the world. As the interview is conducted, ominous sounds can be heard in the background that make Carter squirm in his chair. Meanwhile, people around the world, from San Francisco to Oslo, sit or stand glued to whatever screen they’re watching the globally broadcast interview on.

The Antichrist (Ego Mikitas (L)), is interviewed by Alex Carter (Aaron Groben), in “Interview with the Antichrist.” (VGC Studios)

In one telling scene, Carter touches on what he refers to as “the politically correct church,” and the Antichrist talks about how these institutions view the Bible as little more than “self-help therapy.”

Some of the more timely tidbits of wisdom are about how millions of people watch too much TV, which is full of fear-based programming. For instance, the Antichrist explains how the traditional media news outlets are committed to showing reports that reinforce fear and tragedy, instead of anything remotely hopeful or inspiring (besides a few inconsequential “fluff” pieces here and there). He explains that these gloomy networks use fear-driven subjects in order to get more clicks since more clicks earn them more money. Of course, all of this fear-based subject matter also distracts people from what’s really going on behind the scenes—the crucial issues that should be openly discussed and investigated.

The Antichrist is very straight up and he reveals that The Great Tribulation is fast approaching—it can happen any day now. For those who aren’t that familiar with the Holy Bible, The Great Tribulation is a seven-year period of time when Lord Jesus Christ will carry out two major facets of His plan. The first of these is where He will complete His discipline of the nation Israel, and the second involves Him judging the godless unbelievers of our world.

Rarely do I use the term “must-see,” but I’m making an exception for this exceptional movie—a film with an intriguing plot, interesting characters, riveting subject matter, and lots of wisdom to dispense. Mr. Chey also constructs the film in a fashion that makes it highly informative without coming across as preachy or overly moralistic.

Alex Carter (Aaron Groben) ponders some of his recent life choices, in “Interview with the Antichrist.” (VGC Studios)

As the film’s website states: “THIS IS A MUST-SEE FILM. Show this to your Bible study group, unsaved family members, fellow workers—this film is winning many to Christ and drawing the luke-warm Christian closer to God before the Rapture strikes—which could be any day now.”

I’d even go further in saying that even if you aren’t a Christian, there is some powerful information here that anyone can benefit from, and the film carries an ultimately uplifting message of hope, renewed faith, and everlasting life.

‘Interview With the Antichrist’ is available to watch on Epoch Cinema—visit the link here.

‘Interview With the Antichrist’