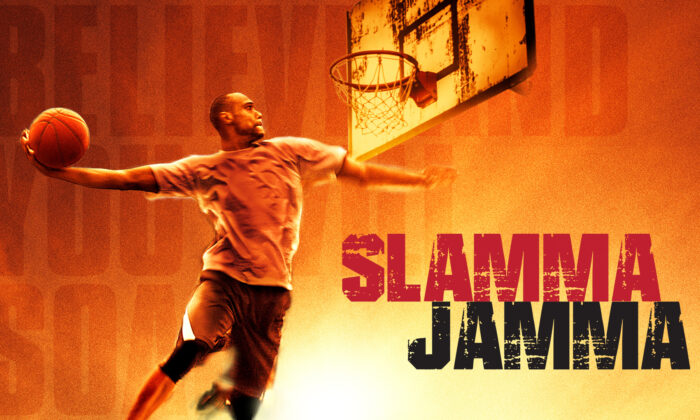 We live in some truly turbulent times, where the loosening of morals, the celebration of depravity, and the glorification of hyper-violence have captured the attention of many souls. It almost seems as if every year for the past decade or so, major film production companies are putting out increasingly degenerate products in an effort to outdo one another.

As a natural result of these dire circumstances, many people are turning away from the typical big-budget films that feature these types of shamelessly debased elements—it’s no wonder that more wholesome fare, such as faith-based movies, have been rising in popularity as of late.

Fortunately, because of visionary filmmakers such as Timothy A. Chey (“Interview with the Antichrist” from 2021, “Freedom” from 2014), faith-based films are also improving in terms of their quality and universal appeal. This is no more evident than in 2017’s sports drama “Slamma Jamma.” Inspired by a true story, it follows the various trials and tribulations of a man who has had everything he loved ripped from him.

In the film’s opening scenes, we see once-promising college basketball star, Michael Diggs (Chris Staples), being released from prison. He’s served six years for an armed robbery he didn’t commit and has nothing but the clothes on his back, and a few dollars the prison bestowed upon him.

Michael returns to his mother Gemma’s (Rosemarie Smith-Coleman) home in inner-city Los Angeles to find her as loving as ever but afflicted by some sort of serious illness. He also discovers that his younger brother Taye (Kelsey Caesar) has been hanging around with the local street gang. And if all of that wasn’t bad enough, his ex-fiancé Lisa (Alexia Hall) has moved on with his former basketball rival, Craig Jackson (Gary Smith), now an arrogant NBA player. Needless to say, a lot has changed since Michael was sent up for his six-year bid.

Despite the rocky circumstances Michael finds himself in, he immediately seeks out any employment he can get, and lands a gig at a grocery store. He can’t quite stay away from basketball and begins shooting hoops with some guys at a local court. There, he quickly befriends a couple of them—Jerome (Ryan Gunnarson), and Brandon (Michael Hardy), who later find out about his once-promising basketball aspirations. But soon, the tempestuous forces surrounding Michael begin to test his resolve.

Michael still has feelings for Lisa and there are hints that she still cares for him as well. However, when he reveals that he has changed during his time in prison because of finding his faith in God, she sarcastically dismisses it, snidely remarking that everyone says they “find God in prison.”

Indeed, the only oasis within the urban desert that Michael can seek solace in, is the neighborhood church, which has seen better days. Within its long-neglected environs, he comes across Pastor John Soul (Ray Walia), who recognizes the former basketball standout. Although Michael confides in Soul that he has lost belief in himself, the pastor can see something that Michael can’t—a vibrant faith that burns as bright as ever, despite his troubled circumstances. Michael then agrees to rebuild the church just as he begins to rebuild his life.

Soon, Michael finds out about a big basketball dunking tournament that could help him recapture some of his former glory. But with his mother’s health on the decline and his brother slipping deeper and deeper into gang life, can Michael find the wherewithal to rally for his last shot at success?

In an age in which the violence and viciousness of action and torture porn tripe have gradually replaced anything resembling plots (such as the John Wick series) and coherent storylines, it’s nice to see that some spiritually healthy alternatives are rising to the occasion. “Slamma Jamma” features some great acting, with Chris Staples doing a convincing job of portraying a down, but not out, sports prodigy (he is a real-life basketball slam dunk wiz, after all). Likewise, the supporting cast turns in admirable performances and we even get to see the great Jose Canseco as one of the tournament’s judges.

Even if one isn’t a Christian, this film carries a universal message of maintaining courage despite heavy odds, and ultimately, redemption through spiritual strength and perseverance.

“Slamma Jamma” is available to watch for free on Epoch Cinema—visit the link here.