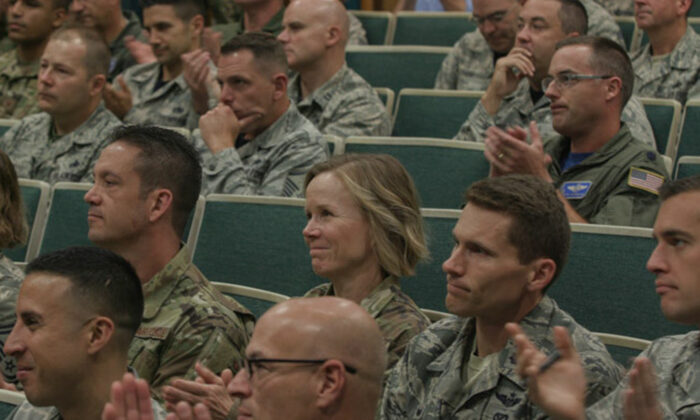 While there have been numerous films of both the fiction and non-fiction variety to examine post-traumatic stress disorder, “PTSD: The Walking Wounded” is one of the most powerful yet. It’s a documentary that sheds some light on one of the most problematic and longest-running issues in the military.

The filmmakers speak with various interviewees, both military and civilian, as they tell their stories of dealing with the insidious disorder. One of the imperative messages that this revelatory cinematic experience stresses is the importance of supporting our veterans, even in the smallest of ways.

Two couples arrange to have a reconciliation conversation in an Episcopal church’s meeting room. From the couples’ initial dialogue, it’s not quite clear how Jay (Jason Isaacs) and Gail (Martha Plimpton) are connected to Richard (Reed Birney) and Linda (Ann Dowd).

However, it’s soon revealed that Richard and Linda’s son shot and killed Kay and Gail’s son in a horrible school shooting. After dispensing with all of the politeness, their conversations turn into selfishness, what-if scenarios, blaming, and apologies. As calls to humanize both the killer and victim come to the fore, can there be forgiveness?

Venom: Let There Be Carnage

In this sequel to 2018’s “Venom,” the film’s protagonist, Eddie Brock (Tom Hardy), struggles with how to live with his alien anti-hero Venom, a parasitic creature that uses him as a host.

The beginning of the film tries to humanize Venom, as it plays the head-chomping creature off of Brock like the TV show “The Odd Couple.” Later, serial killer Cletus Kasady (Woody Harrelson) is latched onto by a more sinister version of Venom, and the two “symbiotes” duke it out. Fun but forgettable; a bit too violent in some parts for kids.

Intrepid photographer L.B. Jefferies (James Stewart) has been confined to his New York apartment in a wheelchair because of a broken leg. To pass time, he begins snooping on his neighbors from his rear window. But when he witnesses what appears to be a murder cover-up by one of them, he seeks help from girlfriend Lisa Fremont (Grace Kelly).

A mysterious ex-gunfighter, Shane (Alan Ladd), rides into the lives of homesteader Joe Starrett (Van Heflin) and his humble family. Shane arrives just in time, as ruthless rancher Rufus Ryker (Emile Meyer) and his band of bullies threaten to get rid of the settlers permanently.

Watch it to see why it’s considered one of the greatest films of all time.

Marshal Will Kane (Gary Cooper) marries Amy (Grace Kelly) in a small town in New Mexico. As he turns in his badge on his way to start a more peaceful life with his new wife, he learns that outlaw Frank Miller (Ian MacDonald) is arriving on a noon train. Kane turns back to face down Miller and his dastardly band of bushwhackers, but at what cost?