Effectiveness of 2 of 3 COVID-19 Vaccines Used in US Drops Below 50 Percent After 6 Months: Study 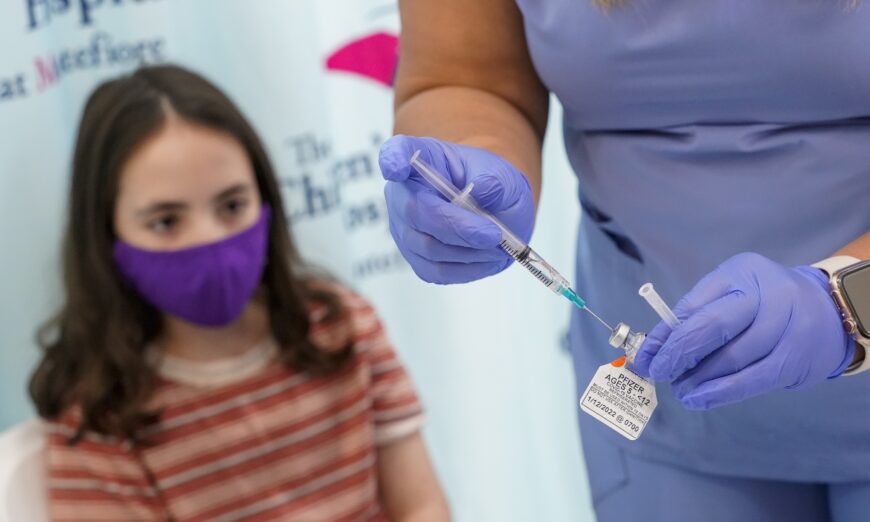 An 11-year-old girl watches as a nurse prepares a syringe with a dose of Pfizer's COVID-19 vaccine, at The Children's Hospital at Montefiore in New York City on Nov. 3, 2021. (Mary Altaffer/AP Photo)

The effectiveness of the three COVID-19 vaccines available in the United States has declined in recent months, with protection against infection falling under 50 percent for two of them after six months, according to a new study.

Dr. Stephen Hahn, head of the Food and Drug Administration during the final portion of the Trump administration, said last year that the agency wouldn’t authorize COVID-19 vaccines that weren’t at least 50 percent effective against infection.

For younger people, the effectiveness was higher: 84.3 percent for the Pfizer vaccine, 81.5 percent for Moderna, and 73 percent for Johnson & Johnson.

While early data showed high vaccine effectiveness against both infection and death, “our results suggest vaccines are less effective in preventing infection associated with the Delta variant,” researchers wrote.

While the vaccinated over time faced a higher risk of getting infected with COVID-19 or dying, the unvaccinated were still more likely to contract the illness or die from it, they said.

Researchers with the Public Health Institute, the University of Texas School of Public Health, and the Veterans Affairs Medical Center carried out the research, which was published in the journal Science.

Researchers examined COVID-19 infections and deaths by vaccination status in 780,225 veterans between Feb. 1 and Oct. 1. They used data from the Department of Veterans Affairs and received funding from the Mercatus Center at George Mason University and the University of California Office of the President.

“Our study gives researchers, policy makers, and others a strong basis for comparing the long-term effectiveness of COVID vaccines, and a lens for making informed decisions around primary vaccination, booster shots, and other multiple layers of protection, including masking mandates, social distancing, testing, and other public health interventions to reduce the chance of spread,” Dr. Barbara Cohn, the lead author, said in a statement.

The research supports recommendations for many Americans, including all Johnson & Johnson recipients, to get booster shots, she said.

Other studies have shown that COVID-19 vaccine effectiveness has waned over time, leading to the booster recommendations from U.S. health authorities, but this was the first to examine all three available in the United States. It also suggested a lower effectiveness against death than many other studies.

Limitations of the study include not knowing why or where people were tested; researchers required a person to have been tested for COVID-19 to be included in the analysis.

Pfizer, Moderna, Johnson & Johnson, and the U.S. National Institute of Allergy and Infectious Diseases didn’t respond to overnight requests for comment, and haven’t appeared to react publicly to the study.

The findings come after two other studies, both preprints, showed that vaccine effectiveness against infection decreased over time after initial injection.

Swedish researchers, using data from nationwide registries, found that Pfizer’s vaccine dropped in effectiveness to 30–47 percent at day 121–180 from 92 percent at day 15.

“From day 211 and onwards, no effectiveness could be detected,” they said. The Moderna shot also declined in effectiveness, but retained some protection after day 181.

Israeli researchers, meanwhile, extracting data from a nationwide database, found that Pfizer’s vaccine was less effective against both infection and severe disease over time after full vaccination.