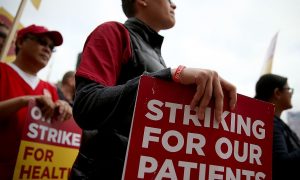 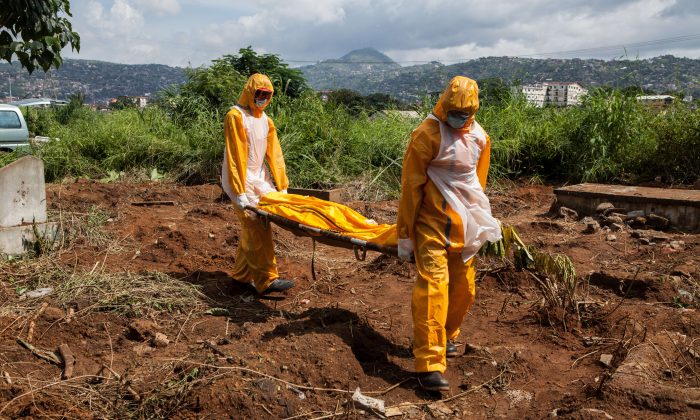 A team of funeral agents specialised in the burial of victims of the Ebola virus. (Florian Plausheur/AFP/Getty Images)
Health News

Ebola can be contracted by people who come into contact with the body of someone who died from the disease up to a week before, according to a study conducted by researchers from the U.S. National Institutes of Health and published in the journal Emerging Infectious Diseases in early February. The researchers collected viable virus samples from Ebola-infected monkeys that had been dead for seven days, and non-infectious RNA for up to 70 days.

The study helps reinforce the need for safe handling of the remains of Ebola victims — a practice considered essential in stemming the ongoing outbreak in West Africa.

Liberia Eases Up on Cremation Order for Ebola Victims

The researchers infected five macaque monkeys with Ebola, then euthanized them once they began showing symptoms. The monkeys’ bodies were then placed in a special chamber designed to simulate the environmental conditions of West Africa. The chamber was “like a big deli fridge where you can manipulate the temperature and humidity,” co-lead author Vincent J. Munster said.

The bodies were left in the chambers for 10 weeks. Periodically, the researchers collected tissue samples from seven different bodily surfaces and four internal organs. These samples were tested for both live virus and for traces of RNA, which forms the virus’s genetic code.

“We’re wearing positive pressure suits,” Munster said. “We’re not breathing the air from the same room. If we could smell the corpses, there’s a chance we could be infected.”

The scientists found live virus on the bodies’ surfaces up to seven days after death.

The scientists found live virus on the bodies’ surfaces up to seven days after death. Traces of RNA, which were not capable of transmitting the disease, were found for up to 10 times as long.

According to the World Health Organization, funeral customs involving contact with bodies has been a major factor fueling the spread of Ebola across West Africa. Safe handling of an Ebola-infected body requires that all handlers be dressed in full protective gear, and that the body be sprayed with bleach, bagged, and then either cremated or deeply buried. More recent funerals in Ebola outbreak regions have allowed the display of bodies, but no one has been permitted to touch them.

The researchers noted that, due to the risk of contagion and the prevalence of Ebola samples throughout the monkeys’ bodies, health workers might be able to use oral swabbing as a faster, safer way to collect samples to test people for Ebola.

Ebola Not yet Beaten

Just days after the new study’s release, World Health Organization head Bruce Aylward warned that the recent drop in Ebola cases has leveled off, raising concern that the outbreak may not yet be beaten.

“It’s what keeps me up at night right now,” Aylward said. “This is not what you want to see with Ebola.”

A sustained effort to implement safe burials and safe treatment protocols led to a large drop in new Ebola cases over the past few months. Health officials have warned that the outbreak will not be stemmed, however, until a comparable effort is made to trace the contacts of infected people in order to identify all new cases early.

So far, the ongoing outbreak has sickened nearly 24,000 people and killed over 9,800, according to WHO statistics.

Ebola Outbreak: Where We Are Now and What Happens Next

At around the same time as Aylward’s warning, a team of Ebola researchers published a paper in the journal mBio warning that limited airborne transmission of Ebola has already “very likely” happened. The vast majority of transmission has undoubtedly been through close contact with bodies or bodily fluids, they emphasized, but they warned that it is dangerous to assume that we know more about Ebola than we actually do.